If you followed this blog last fall, you know I like baseball. This year's season is just getting started and Saturday was the first time I watched a game. Now, the guy I live with thinks watching baseball on TV is like watching paint dry. I admit it is slower than the sports he likes to watch. But, I figure if I have to suffer through endless football (college and pro) and basketball games (March Madness), he can indulge me with a few Saturday afternoon baseball games.

In my mind, baseball equals summer. Since the season has started, summer is just around the corner so we'd better not have any more snow! My favorite team has always been the Tigers. I grew up in a Detroit suburb so how could I not like them. (Second fav team, St. Louis Cardinals—because of my mom who grew up there.) Summers in my teens meant lying in the shade with my little transistor radio tuned to Ernie Harwell for his play-by-plays. When I got older, I went to games in the old Briggs (then Tigers) stadium. I don't pretend to know all the players these days, but I sure knew them way back then. Al Kaline, Norm Cash, and Rocky Colavito. Mickey Lolich, Willie Horton, and Bill Freehan. And who can forget Mark "the Bird" Fidrych and the infamous Denny McLain?

I've always followed the home teams of wherever I'm living. When we lived near Kansas City, I followed the Kansas City Royals. The year of the I-70 series between the Royals and the Cardinals tested my loyalty, as I'm sure my mom's was tested in the 1968 World Series between the Tigers and the Cardinals. When we lived in Chicago, I rooted for the Cubbies. I'm a sucker for the underdog. Still, the Tigers will always be my favorite team.

Why I like baseball is complicated. Maybe it's the slower pace that is so refreshing in this hurry-up world. Baseball ranks right up there with Mom and Apple Pie as American staples. Another reason is that I can follow baseball. I know the rules. Plus, baseball reminds me of my mom and her mother. Gram took me to my first major league baseball game in St. Louis. She taught me how to keep score, which came in handy when my son's Little League team needed a scorekeeper.

So why "muse" about baseball besides just liking it? (As far as I'm concerned that should be enough.) Last week, I wrote about second chances. In baseball, the players get many chances. I have to admire guys who get up to bat again and again, trying to connect with the ball. They don't give up. They strike out, fly out, get tagged out, and keep on trying. A corollary could be drawn between baseball and writing. We keep getting up to bat (sending manuscripts to editors and/or agents). Sometimes, we make it to the farm team (small publishers) and sometimes the majors (NY's big pubs). And many, many times, we don't make it at all. Yet, despite rejections, we suck it up, put our egos on hold, and try again. 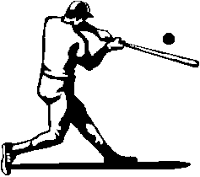 In the end, all that matters is we keep getting up to bat.