Which is better? Dialogue or description. Okay, they aren’t really opponents. Each has its function. Without dialogue, we would have endless pages of description. Remember the “classics” we had to read in school? The ones from the 1800s, where paragraphs went on for over a page—complete description, little dialogue. Bo-ring, right? On the other hand, without description, we would have talking heads. No idea where the characters are or what they are doing. Disconcerting.

So, how do we achieve a balance? Perhaps the better question is what is the reader’s expectation? In an action-adventure novel, the reader expects action. Short, punchy sentences. Brief dialogue. Short paragraphs. In a contemplative novel, one expects longer, more in-depth descriptions. Now, that doesn’t mean you can’t do both in the same novel. All action leaves the reader breathless. Even action heroes need downtime. Romance novels require the characters to talk to each other, along with mood-setting descriptions. I cannot imagine a fantasy novel, with all its glorious descriptions of a magical place, not having characters who speak.

Last week, in my post on Autumn, I mentioned that descriptions in a good part of Switched were fairly easy to write. Fall in Michigan bombards the senses. Sights, sounds, smells, tastes, touch. When we incorporate the senses in stories, readers are grounded in reality. Because they have had similar experiences, they can identify with the characters, plunging them deeper into the story.

So, how many of you have ridden in a starship? Well, neither have I. No surprise there. The trick with writing science fiction, sci-fi romance or fantasy is in the details. It’s the little things that count applies to writing as much as it does to a good marriage. We build this fantastical world out of our imagination, but it has similarities to our real world. By hitting on those similarities, we make our world believable. The starship in the Switched series has a gray-carpeted hall. We all recognize industrial carpeting from offices, banks, businesses. Throughout the ship, there’s a continuous hum from the engines that the crew is so used to they don’t hear it. Riding in a car or plane is a close match. We hear when something is amiss, as Jessie does in Switched, but if the engine is running smoothly we take it for granted.

As I’ve mentioned in every interview, I’m a pantser—I write by the seat of the pants—not a plotter. An idea comes and I run with it. The story plays out like a movie in my head. Since I like action-adventure movies, my stories usually begin with action. Switched, Too begins “Emergency Alert!” Boom. Throws the reader right into the middle of a crisis. Or, I’ll begin with provocative dialogue. Switched 3 (no title yet) begins “I want to meet my mother.” Doesn’t that beg a question? Whichever way a story begins, the point is to hook the reader whether s/he picks the book up off the shelf and reads the first page or clicks on “Look inside” for a preview on Amazon.

Dialogue is easier for me to write than descriptions because I hear the characters speak. (Sure hope my kids aren’t reading this. They’ll put me in a home for sure.) As the story unfolds, I concentrate more on what the characters say and do, not where they are exactly. My first draft is pretty bare bones. Dialogue and stage directions, some internal dialogue. Then, I go back and layer in descriptions. Actually, I do a lot of back and forth writing. I’ve heard it called circular writing—write for a while, go back and add, write more, go back, etc. Those writers who plot first are probably groaning at what they consider wasted time. I say, whatever works. 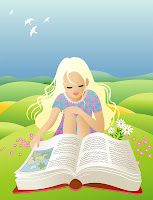 Let me rephrase my original question. Which do you prefer to read/write—dialogue or description? Or does it matter?
Posted by Diane Burton at 9:38:00 AM