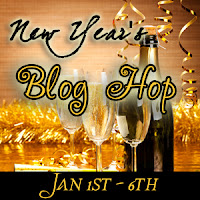 Congratulations to Drea B  who won the $10 Amazon Gift Card.


For the Grand Prize winners, check out http://carrieannbloghops.blogspot.com/2013/01/new-years-blog-hop-winners.html

It's the second annual New Year's Blog Hop!!! Come and celebrate the new year with brand new books, friends, authors, bloggers and more!! It's a season for change and we're ready to live it up with our favorite romance heroes and heroines!

Happy New Year!  I love New Year’s Day. It’s an opportunity to start over and make things right or better. I’ve made all kinds of New Year’s Resolution, stuck with them for a while and then gradually forgot about them.

This year, I plan to post what I want to accomplish in plain sight—above my computer monitor. It’s a little hard to ignore what’s right in your face. I hope. A lovely tradition a friend mentioned is a “good day” jar (I'm sure that's not the real name) where you write on a slip of paper something good that happened that day. We so often think only about the bad stuff. It would be so great to go back and read about the good things that had happened at the end of the week, month, year. I’m going to try that.

What is one thing you’re going to try this year?

If you’re looking for good books to read, be sure check out the rest of the participants in the New Year’s Blog Hop. (See link  below.)

Here’s a little bit about my latest book, The Pilot:

There's no place like home and he just stole hers. Cargo hauler, risk taker Celera d'Enfaden must work with rule-bound Administrator Trevarr Jovano to save her brother from a galactic gangster.

If you were here for the Holiday Gifts of Love Blog Hop, you'll be happy to read a new excerpt from The Pilot:

Celara stopped looking for the Dockmaster when she saw a pair of legs topped by the most gorgeous set of male buns she’d seen in at least a year. The owner of the aforementioned body parts, encased in the dark blue uniform of the repair crew, was bent over the open hatch of an Agilean Speeder.
Now, there was a ship. The sleek vessel—one of the fastest in the galaxy—almost distracted her from the mechanic. He’d shrugged off the top portion of the jumpsuit so that it pooled around his waist. The environment of the repair shop affected many newcomers, especially those unaccustomed to the heat.
As she stared at his butt, all she could think was oh, mama. She hoped he was human and that the rest of him lived up to the preview. Better yet, she hoped he was in a party mood. After escaping from the pirates, Celara wanted to howl . . . and someone to howl with.
“Hey, big boy,” she called to the mechanic. “Wanna party?”
As the mechanic abruptly straightened, he whacked his head on the raised engine hatch. He muttered a Bricaldian curse about origins. She hoped he meant the ship’s, not hers. But then, considering her origins, that curse wasn’t out of line. When he turned around, she sucked in a breath. Oh, yeah. A primal part of her sat up and took notice. His backside, gorgeous as it was, didn’t compare to the rest of him. He had the broad shoulders and muscles of a laborer plus the black hair, square jaw and blade-straight nose of Bricaldian aristocracy. What a delicious combination.
“Did you arrive on that hauler?” He nodded to her ship. His voice, a tantalizing allure of baritone and chokiris, sounded vaguely familiar.
“Yep. That’s my ship.” She tucked her thumbs into the side pockets of her trousers and thrust out her chest a little in pride. “D’Enfaden’s Thermopylae. Fastest little transport in three sectors.”
He walked past her to examine her ship then ran his hand—long, strong fingers, she noted—over the dents and scrapes along the aft section. “It appears to have sustained damage.”
“My thruster gimbal got damaged when I kissed an asteroid evading filthy pirates. They didn’t catch me, though.” She grinned. “Hey, you new around here? Don’t remember seeing you before—and I sure would remember seeing you.”
He arched his dark eyebrow.
She raised her hand, palm outward, in the traditional indie greeting. “Celara d’Enfaden.” As he stared at her with green eyes as sharp and clear as veridion, she raised her own eyebrow. “And you are . . .”
When he reached into the pocket of his work uniform and pulled out a zircan leather folder, she groaned before he even opened it. She knew what the folder contained. A shiny gold badge, carved with an intricate array of stars, swirls and a tiny red jewel in the center. The insignia of the Coalition.
“I am Administrator Trevarr Jovano.” He snapped his fingers and two armed Security personnel stepped out of the shadows of the Agilean Speeder. “I am impounding your ship and confiscating your cargo.”

The Pilot is available at Amazon ~ Smashwords ~ Barnes & Noble ~ Kobo

Leave a comment for a chance to win a $10 Amazon gift card. Be sure to leave your email address. For more chances to win, enter in the Rafflecopter giveaway. 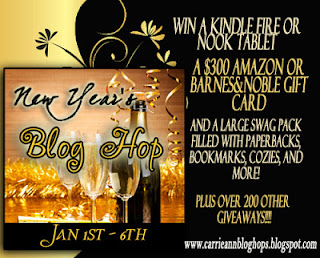 To continue on the Hop go to http://carrieannbloghops.blogspot.com/ for more links and to qualify for the THREE grand prizes. There are over 200 participants in the New Year’s Blog Hop. You can go to EACH blog and comment with your email address and be entered to win. Yep, you can enter over 200 times! So, be sure to leave a comment! And don't forget to leave your email address.