If you stopped by the blog last Saturday, you got to read a sample of The Promised One. Now you get learn a little about the authors, C.D. Hersh. 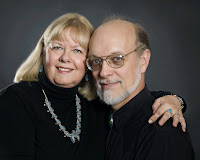 Welcome. Please tell us about yourself.

We are a husband and wife writing team who has been married for 43 years and writing together since the mid 90s. We enjoy traveling, going to movies and just being together.

As a team we tend to be afternoon and evening writers, although Catherine has been known to be a midnight oil writer when she is working with the first draft.

When did you first realize you were a good writing team?

Our first experience as a writing team came when we were writing drama scripts for our church. We had so much fun doing it and people seemed to really like what we wrote, that on a business trip Donald took, we wrote a three act play called Adam and Eve on a Raft. After that we were hooked on writing things longer than two minute skits. Then on another business trip we were discussing writing a book, to pass the time and keep awake, and the paranormal series was born.

That’s hard to answer since we’ve seen so many of them. For this year we would say “Safe Haven” is probably the one. An all-time favorite is “The Lake House” where the hero and heroine meet through a series of letters, which go back and forth through time after being posted in a mailbox at a lake house.

Are you pen and paper, strictly computer, or some combination of the two?

We are definitely a combination. When we plot on our travel trips, Catherine takes copious notes in a little composition notebook like we used in grade school. Then we transfer them to the computer plot charts and character sheets and first draft pages, which are printed out for Donald to review and edit. Then once the first draft is done we sit in his office with a double monitor and edit and revise, line by line.

We like the part when the ideas are flowing and the story line is coming together. It’s also enjoyable when the characters are growing into people you get to know and they surprise you by taking your story somewhere unexpected that actually works. Then there is page 300 or later when you write “THE END”. The part where you get the contract is nice, too. Gee, maybe we just like all the parts. LOL

Catherine worked as a “Kelly Girl” for a while which took her to a number of different jobs that would allow a heroine to meet lots of people and possibly get into lots of trouble. Donald was a construction worker, an electrician, so there could be a character who is a hottie in a hard hat in some book.

Our latest book is The Promised One, the first in a series entitled The Turning Stone Chronicles. The book is a paranormal romance about folks who use magic to shape shift, and it is not the ordinary animal shape shifting. We think readers will be surprised. Amazon reviewers have called the story line “totally unique”, and “a book that keeps you turning the pages to the end”. We are currently working on the second book in the series, Blood Brothers with an anticipated release sometime next year.

EXCERPT:
Tucking his gift under her arm, she started to leave.
“Hey.” He pointed at the other gifts. “Aren’t you going to add yours?”
“Nope. I’ll give it to you later, when we’re alone.”
“Ooh. Something special. Mineral or animal?” His right eyebrow raised, his smile growing.
Alexi laughed. “Just embarrassing.”
“For you or for me?”
“I’m not telling.”
Sidling close to her, he backed her against the wall. “Come on. Just a hint,” he said, a purr in his tone as he placed his hand on the wall next to her shoulder and moved into her personal space with the ease of a lover. One of his famous melt-the-girl looks smoldered in his gaze. The golden flecks in his green eyes lit up like fireworks. Hot fireworks.
Enjoying his closeness and the raw sensuality emanating from him, she lingered for a minute, then slowly moved away. Standing this close she could get burned, and she wasn’t ready to play with fire . . . not yet. She shook her head. “Not a chance.”
He crossed his arms, obviously irked that she hadn’t succumbed. “My irresistible charms work on everyone else. Why not you?”
Oh, if you only knew. She had to fight to resist him. She flashed him a smile. “Because I’m special. And I’m your partner. Keeping your back safe is more important than getting you on your back.”
He laughed, a deep, throaty, and utterly sexy sound.
She locked her knees to keep from melting into a puddle.
“I like the sound of that.”
Of course you would. She felt her face flame.
Buy Link:
Amazon: http://www.amazon.com/exec/obidos/ASIN/B00DUMODKI/

One last question. Where can readers find you?

Catherine and Donald, it's been a pleasure having you here and learning about you. Wishing you the best in your writing career.

Email ThisBlogThis!Share to TwitterShare to FacebookShare to Pinterest
Labels: C.D. Hersh, The Promised One