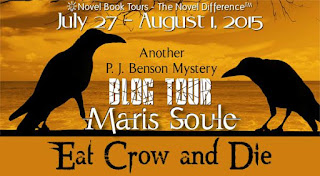 I'm happy to have Maris Soule back with another mystery. It's a busy summer for Maris with two books released almost simultaneously. Eat Crow and Die is the 3rd book in her P.J. Benson Mystery series. I loved the other two books so I had to read this one.  (See my review below.)

P.J. Benson knows Sheriff’s Detective Wade Kingsley wouldn’t blow up his own boat to kill his ex-wife and her new husband, Michael Brewster. Sure, Wade wasn’t happy that his ex was taking their six-year-old son, Jason, to live in California, but Wade and Jason were also onboard the boat when it blew up. Wade would never have endangered his son that way. Nevertheless, the investigating detectives consider Wade their prime suspect, and Wade’s ex in-laws loudly accuse him and threaten to file for custody of Jason.

Under the circumstances, P.J. is certain this isn’t the right time to tell Wade she’s pregnant, but bouts of morning sickness give her away. Wade is upset by the news. P.J. wonders if it’s because he’s afraid he’ll be put in prison for a double homicide he didn’t commit, or if he’s afraid the new baby will cause P.J. to become schizophrenic, as was the case with her mother. Even P.J. is worried about that. Although Wade doesn’t want her playing detective, P.J. soon discovers that Michael Brewster wasn’t as great a guy as everyone thought. But did anyone hate the man enough to kill him?

As I headed for the room number Ginny had given me, I thought back over the four months I’ve known Wade. The first time I saw him, he reminded me of Nicolas Cage and Tom Cruise wrapped up in one man. He certainly didn’t look like a homicide detective. Back then he thought I’d murdered someone. That or I was crazy, like my mother. We've had a couple more misunderstandings since then, but for the most part we’ve gotten along quite well—in bed and out. On the other hand, there are times when he can be stubborn, irritating, and unreasonable. As I neared his room, it sounded like he was being all three.

“Until the doctor releases you,” a feminine voice said, “you need to stay put.”

“Damn the doctor. I told them downstairs I need to get back to South Haven.”

“Are you giving the nurse a bad time?” I asked as I entered the room.

Wade made a grunting sound as he looked my way. “They’re treating me as if I’m sick. I hit my head, that’s all.”

The poor nurse looked at me and shook her head. “He’s supposed to rest.”

“Be a good boy, Wade. Do as she says. Put your legs back up on the bed and rest.”

He glared at me—at both the nurse and me—but he put his legs back up on the mattress and allowed her to pull a sheet up to his waist. He didn’t lay back, so I asked, “Can he have the bed cranked up, so he can be in a seated position?”

She didn’t make a move, and neither did Wade, so I stepped closer and pushed the button that raised the back so Wade could be in a fully seated position. “That better?” I asked.

He grumbled, but gave a slight nod, then winced.

He had a four-inch square bandage on his forehead, and I could see some discoloration along the side of his face, but it wasn’t until he went to lean back against the pillow behind him and grimaced that I knew it wasn’t just his forehead that had been injured.

“If you need anything, press that button,” the nurse said, indicating the red one on the corded remote.

Wade grunted, and she quickly left. I’m sure she was glad to leave him to me. He clearly wasn’t in a good mood.

“He seems fine. They’re waiting for the results on a couple of tests, then, Ginny said, she’ll bring him by your room.”

“I don’t think they want you leaving today.”

“Uh-huh. And how many stitches?” I asked, pointing at the bandage on his forehead.

“I don’t know.” He gave me a crooked smile. “Maybe fifteen.”

“And the back of your head?”

“I have a little goose-egg, that’s all.”

I reached behind his head, but I’d barely touched his scalp before he let out a yelp. From what I could feel, his “little goose-egg” was more like an ostrich egg. “How did you hit both the back and the front of your head?”

“I don’t know.” He let out a deep sigh. “I don’t remember anything from the time Linda and that arrogant bastard she married finally arrived at the boat with Jason until I found myself on a stretcher, being lifted into a helicopter.” He narrowed his eyes. “I don’t even remember that very well. It wasn’t until they poked my head with a needle that I really started focusing on what was happening.”

“You don’t remember taking the boat out on Lake Michigan?”

He started to shake his head, but immediately stopped. “Not a thing.”

The pupils of his eyes were dilated, and since Wade doesn’t do drugs, and it was fairly light in the room, I figured the doctors were right, he did have a concussion. I’d heard how people who had concussions often couldn’t remember what happened before or even after the accident. Some lost entire days. Sometimes the memories came back; sometimes they never did.

“I do remember Linda said they didn’t want to fish,” Wade grumbled. “Here she insists she wants to go on this fishing trip with Jason and me, that both she and Brewster want to go along, and then as soon as she arrives—an hour late, at that—she starts making a fuss about going fishing. I’d even brought fishing poles for the two of them.”

“But they did go out on the boat with you? With you and Jason?”

“They must have.” Wade looked out beyond the end of the bed, and I could tell he was trying to remember.

“Do you have any idea where you and Jason were when the boat blew up?”

“No.” Wade looked back at me. “You haven’t heard anything about Linda?”

“So they’re not here, not in the hospital?”

From his expression, I knew what Wade was thinking. If Linda and her husband were on the boat and had been thrown to safety, Linda would be with Jason now. The woman had become paranoid since telling Wade that she and her new husband were moving to California and taking Jason with them. She was sure Wade was going to do something to stop her.

“If she was on the boat . . .” I started to say, but didn’t finish. The thought of what might have happened to Linda—to both Wade’s ex and her new husband—caused my stomach to lurch.


I thoroughly enjoyed this book. I'd read the other two P.J. Benson books (you don't have to in order to enjoy this one) and have been waiting on pins and needles for this book to be released. As a fan of Maris Soule's, I've watched its progression and even participated in the choice of title.


P.J. Benson can't leave a mystery alone. She knows Deputy Sheriff Wade Kingsley couldn't have blown up his own boat, not with his son aboard. When detectives are convinced Wade did it to get rid of his ex-wife and her new husband, P.J. does her own detecting. In the previous two books, people have wanted to kill her. Same in this one. But she's got more to worry about and a surprise of her own for Wade.


A compelling plot, well-developed characters, and suspense makes this mystery a page turner. This is another of Maris' books that kept me reading until the wee hours of the morning. I couldn't wait to see if I was right about whodunit. (I was partially right.) As a fellow Michigander, I love the references to places I know. Maris Soule has certainly found her niche with outstanding mysteries.