The SFR Brigade Showcase is the chance for Science Fiction Romance authors to showcase excerpts from their latest releases, snippets from a work-in-progress, a new cover for their book or just have fun with something silly, like a character interview! Be sure to check out all the great posts this month.

For my showcase, I’m sharing an excerpt from the third book in my Outer Rim series, The Protector. It’s a standalone book, which means you don’t have to read the previous two to enjoy. But I hope you will. 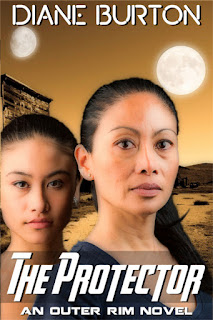 After tavern owner Rissa Dix rescues two girls from a slave ship, she must rally the townsfolk to prevent traffickers from raiding the frontier colony. She’s met with apathy and disbelief. Because she lost her own baby to traffickers, she’s determined that no other mother will suffer the same heartache. Industrialist heir Dillan Rusteran aids her in rescuing more children. Little do they know they’re about to tangle with a trafficking ring that puts Rissa in danger. Dillan’s loved her for years despite her claim she’s too old for him. As they fight the traffickers, will she finally see him in a new light?

When she heard the rustle, Rissa stopped in the middle of the sanitary. “Whoever you are, come out. Right now.”
Another rustle then the sound of feet lightly hitting the floor. The lock slid open then slowly the door moved.
“Please,” a soft voice whispered. “Don’t hurt us.”
That sounded like a young girl.
“Come out where I can see you.” Rissa, too, whispered.
A tall, dark-haired teen stepped out, followed by a smaller girl with light brown hair. They both looked terrified. Their hair was matted and dirt smudged their faces. Their clothes were filthy. The smells emanating from them contributed to the general san-fac odors. Rissa did her best not to react.
Holding the other girl behind her, the tall one stepped forward, jutting out her chin. “We are not going back.”
“O-kay. Back where?”
“You can’t make us. We’ll escape again.”
Rissa had to admire her bravado. “You escaped? From where?”
“Did they send you in here to get us?”
Since the taller one seemed to be the spokesperson, Rissa kept her eyes on her. Something about her was compelling. Rissa could be looking at herself at the same age. Then it hit her hard, like a blow to the stomach. That was what Miri would have looked like at that age. Same strong Traishan features—olive skin, dark hair and eyes. Same strong will.
Rissa took a deep breath to steady herself before locking the outer door. “Nobody sent me. You asked for help. What can I do?”
“Get us out of here before they discover we’re gone.” Despite the strength in the tall girl’s voice, she worked hard to keep her chin from wobbling.
“Who?” Rissa was afraid she knew.
“Those men. The Chellians. We can’t go back. We won’t.”
By the Matriarch, traffickers.
Her lungs seized, her heart hurt so badly Rissa clutched her chest. Be strong, she told herself. Pull yourself together. No traffickers had ever come to Astron Colony before. Or even to Galeriana. She had to help the girls get away.
She glanced at the window on the far wall.
“We couldn’t open it,” the smaller girl sobbed. “We were trying when you came in. We thought you were them.”
Since Rissa was taller, she could easily reach the window. With a shove, she got it open. “Come.” She motioned to the tall girl. “You first. You can catch your friend. She’s too small to catch you.”
She cupped her hands for the girl’s foot. “Hide outside. I’ll come around and take you somewhere safe.” At the girls’ wary looks, she added, “I promise. Now go before someone comes looking for us.”
Rissa boosted her up to the open window. The tall girl hoisted herself through, disappeared for a moment then stuck her head inside.
“The ground is higher out here. Come, Anaris.” She held out her arms.
The small girl, Anaris, gave Rissa a panicked look. “You’ll come for us?”
The door rattled. “Hey,” a male yelled. “Open up.”
Anaris gave her a panicked look.
“Gimme a min,” Rissa yelled back.
“I promise to come for you,” Rissa whispered then gave her a boost. Like the tall girl, Anaris disappeared through the window.
As Rissa reached to close it, the tall girl was there about to do the same. “Thank you.” She shut the window and ducked out of sight.
Hoping they would wait for her, Rissa walked out of the san-fac. A mech glared at her. “Whadda mean by locking the door?”
“Didn’t want you walking in on me.” She glanced over at a commotion near the freighter where she’d delivered the supplies. “What’s going?”
The pilot was yelling and his two crewmen were darting between ships, searching.
“Damn offworlder.” The mech brushed past her into the san-fac.
When the pilot saw her, he yelled, “What did you do with them?”
Rissa looked around to see who he was shouting at.
“You there.” He stormed up to her. “Where are those two girls?”
She affected a confused expression. “What girls?”
“My cargo, I mean passengers. Damn you to Lexol’s Fire. How did you get them out?”
The pilot’s slip confirmed what Rissa feared. The girls she helped escape had been cargo. The pilot and crew were slavers, bastards who trafficked in children. A primal urge swept through her. Kill them. Kill them now.

The Protector is available at: Amazon ~ Kobo ~ Smashwords ~ B&N ~ iTunes

Stop by the Showcase page to visit all the other Showcase authors! You’re sure to find some interesting reads.