Veronica Lynch and FOR KEEPS

“For Keeps” is part of the Candy Hearts series published by the Wild Rose Press, and due for digital release on February 10, 2016. 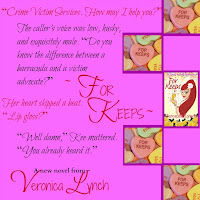 Set in the late 1980's in Western New York state, it is about Keenan Rossi, a sheriff's investigator and Meghan Muldoon, a victim advocate. Keenan is ready and anxious to settle down and make their romance permanent while Meg isn't so sure. She likes her independence and loves her vocation—which is often at odds with what she must do to assist her clients' recovery.

Why did you choose this setting for “For Keeps”?

I have lived in the area for the last forty years and know it fairly well. I always wanted to live in a home on the shores of Lake Ontario; “For Keeps” has given me the opportunity to live vicariously.

Did you do special research for “For Keeps”?

Nope, I lived it. Except for the ongoing relationship with a cop. All I had to do was think about a typical day around a human services agency and went to town.

What made you write this particular story?
For many years all I wrote was full length romantic suspense and had the urge to try something different. I saw an article in the RT magazine for a new ePress which was looking for novella length subs for their new Late Escape line [over 40 heroes and heroines]. I decided to give it a shot and they contracted the story. Back then For Keeps [which had a different title then] was much shorter. I liked the story and the characters and was pleased I met my goal. Eventually I retained the rights to the story and when the opportunity to write something for the Candy Hearts series, Meg and Keenan's story came to mind, especially since it ends on Valentine's Day. I probably tripled the length by adding new scenes, especially the one about the day they met and Keenan knew immediately Meg was 'the woman his mama always warned him about'.

How old were you when you read your first romance book?

It was 1983 so I would have been in my middle 30's. I worked the Surgical Intensive Care Unit in those days, because I needed the experience in order to work in the ER. I knew from day one the ICU was not for me but I made myself stick it out for six months. Working the night shift in the Unit put me at two ends of an emotional spectrum: I was either scared spitless a patient might crash or fighting tooth and nail to stay awake. One night I discovered a grocery bag filled with used Harlequin-Silhouettes bearing a sign “free for the taking”. The first one I picked was written by by Billie Douglas. I never forgot it. In fact, I still have it on a shelf in my office.

Have you ever experienced something unusual that influenced a story?

Part of my job as director of a victim advocacy agency included supervising interns who were criminal justice majors. One of the perks was free tuition for one course each semester. Over the years the interns raved about a course titled Terrorism and Hostage Taking. Part of the course involved being taken hostage by officers from the county sheriff's hostage negotiation team. It changed my life. In more ways than one. 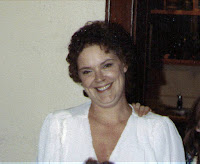 To purchase For Keeps, or any book by my alter ego Kat Henry Doran, go to www.WildRosePress.com and click on the author search button for Veronica Lynch or Kat Henry Doran. That will bring up all of my books available in the store.

Thanks, Diane! Great questions. They made me think.

PS I will be giving away a Valentine's theme zippered cosmetics case to one visitor.