Anniversary of a Tragedy


Thirty years ago last Thursday, I walked into my kids’ school. A television on a cart had been set up in the hall. Kids siting on the floor and teachers leaning against walls watched intently. I’d forgotten the shuttle launch was that morning. Which only shows how complacent I’d become over space launches.

For years, ever since the first rocket launch into space, I always stopped whatever I was doing and sat glued to the TV. Every channel broadcast the launches and, like millions of Americans, I eagerly watched. Then, sorry to say, the launches became almost commonplace. Ho-hum. Americans had walked on the moon—several times. The first shuttle launch was exciting, mainly because Hubs and I had taken our kids to Cape Kennedy Space Center and watched a demonstration on the tiles that covered the shuttle. But then interest dwindled. Even for me, who used to know the names of the original astronauts.

So that morning, when I saw the television, I joined the others to watch a space launch. How exciting that a teacher had been chosen to join the crew, especially that she would broadcast to classrooms from space. Then 73 seconds into the launch, the Challenger exploded. Right before our eyes.

Silence. Then gasps of horror. Followed by the realization of what had just happened. Tears and sobs. Even though 30 years have passed, I still remember the adults looking at each other in disbelief. Someone, I assume the principal, turned off the television and sent everyone back to their rooms. The teachers, still in shock, were left to deal with the children—their questions, their fears—while trying to deal with their own disbelief and grief.

What followed was an investigation with lots of finger-pointing. What happened, how did it happen, who was to blame.

Those who thought space exploration was a waste of money had more ammunition for their arguments. I’m reminded of the 2014 movie Interstellar. Because of drought and famine, all technology (including NASA) has ceased. Farming is all that matters. Forget exploration, find a cure for the drought. Ironically, only space exploration will help the inhabitants of a dying Earth.

Fortunately, we’re not that short-sighted. Space exploration continues. Our probes have found many “Goldilocks” planets (ones where the conditions are “just right” for human habitation). But the takeaway from the Challenger tragedy is that we can’t give up. In school, we learned about the voyages of Columbus, Magellan, Marco Polo, Balboa. How many early explorers perished? No idea. Certainly, many did. As horrific as the Challenger disaster was, we learn from it and continue. 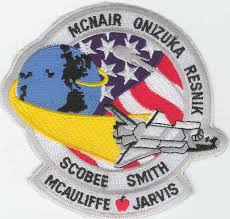