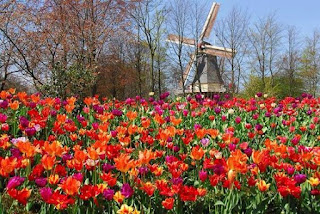 It's a beautiful Monday morning here in West Michigan. The sun is shining, the temp is in the high 60s, low humidity. And it's Tulip Time. West Michigan was settled by the Dutch in the 1800s. The settlers brought bits of home as a reminder of their origins, including tulips. 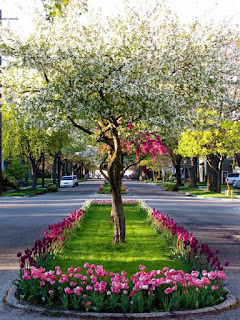 After the winter that was, I didn't think the tulips would be blooming in time for the annual festival. (One year, the tulips bloomed too soon, so they called it Stem Fest.)

Holland, Michigan (on the east coast of Lake Michigan) goes all out for Tulip Time. Parades, Kloppen dancing in the streets, crafts, music, food. OMG, FOOD! Maybe I should've waited until after the festival before joining Weight Watchers. Lots of Dutch specialties--like pigs-in-a-blanket, giant (the size of a baseball) meatballs & mashed potatoes with kale covered with gravy, oliebollen (delicious doughnut-like pastry with about a thousand calories). 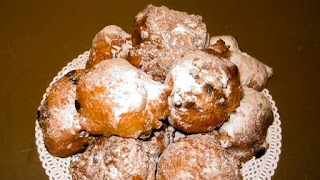 At the marktplaats, you can buy Dutch treats, memorabilia, wooden shoes, and many more items that you don't need but are so cute, lovely, unusual you can't resist.

They also have the usual carnival rides and "fair food" like elephant ears, popcorn, etc.


During the month of May, twelve science fiction and paranormal romance writers are donating 25% of their royalties for their special Blue Cover books to the ALS Association, an organization dedicated to providing ALS patients and their families with a multitude of different types of assistance, and continuing research to find a cure for this deadly disease..

Have a great week!