Welcome to Weekend Writing Warriors where authors share an 8 - 10 sentence snippet. Be sure to visit the other authors. You can find them here.
I'm sharing snippets from my Christmas story, ROMANCE REKINDLED. Abby's mother and new boyfriend were arrested the night before. It's Christmas Eve morning, and they're appearing before a judge, dressed as Santa.
Please excuse the creative punctuation, necessary to keep this within the guidelines. It's also edited some from the original.

“Florence and George, why were you taking bread from the dumpster—the Far Haven Mission feeds those in need.”
“The bread isn’t for us,” George said, “We feed the ducks with it.”
Mother stood, “Danny, I mean Your Honor, sir, that stingy old Duncan Randolph wouldn’t give me the bread when I asked him—we feed it to all the birds at Waterfront Park.”
Judge DeVran’s lips thinned, “Deputy, you called me away from my important duties at the hospital for this?” he shoved up his fur cuff to look at his watch.
“Yes, sir, I—”


“If Santa is late for the children’s holiday party, it will be your fault, Deputy. Case dismissed.” He banged the gavel then stood. 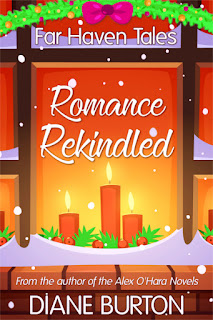