I am thrilled to have Veronica Scott visiting today. Not just because she's my friend. She has a new release in the Badari Warriors series. I love these books. Such a great concept. But then I should let Veronica tell you about it. 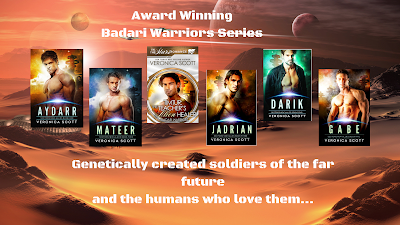 Thanks for having me as your guest today, to talk about my new book!
I’m having fun writing an actual series (although each book is written to be read standing on its own – you don’t have to read the other books first) and challenging myself to come up with new wrinkles for each successive novel.

For your readers who might not have read any of my Badari Warriors books, here’s the background:

Genetically engineered soldiers of the far future, the Badari were created by alien enemies to fight humans. But then the scientists kidnapped an entire human colony from the Sectors to use as subjects in twisted experiments…the Badari and the humans made common cause, rebelled and escaped the labs. Now they live side by side in a sanctuary valley protected by a powerful Artificial Intelligence, and wage unceasing war on the aliens.

I started this series in part because I love Laurann Dohner’s New Species and Lora Leigh’s Breeds, both of which have entirely different takes on genetically engineered soldiers, and I wanted to write my own stories using the trope, set in my future universe, the Sectors. 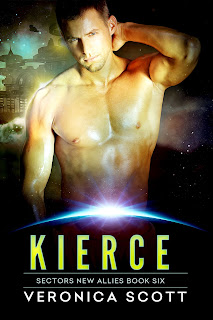 The blurb: Elianna McNamee, spaceship engineer, is far from her home in the human Sectors, kidnapped along with all her shipmates to be used for horrifying experiments conducted on a remote planet by alien scientists.
Her captors decide to toss her in a cell with a ferocious predator, expecting him to kill her…but Kierce, the Badari warrior in question, has too much honor to mistreat a human woman. The trouble is, he’s trapped in a form drastically different from his own as a result of twisted genetic meddling and hiding dark secrets to save other Badari lives.

Able to become a man again briefly with Elianna‘s help, he and Elianna bond over their mutual hatred for the enemy but when rescuers finally arrive, the pair are separated by well-meaning Badari authorities.

Kierce struggles to overcome flashbacks from the torture and drugs the alien scientists inflicted on him. He and Elianna despair over whether he’ll ever be able to regain his rightful place as a man and a soldier in the pack, much less be ready to claim a mate.

Elianna accepts a risky but essential assignment far away from where Kierce is being held, working with another man who’s more than professionally interested in her. Her heart belongs to Kierce and she can’t forget their two nights of shared passion but will that be enough to lead them to a happy reunion?

The excerpt:
The officer nodded, raised the bottle to his lips and drank deeply. Wiping his lips, he cleared his throat and tucked the now closed container into a loop on his own belt. “And the human?”

The man holding her gave Elianna a shove. “She can go back into the cell,” he said sullenly.

Weak in the knees, Elianna wanted nothing more than to rejoin her fellow humans right now, but the officer hesitated.

“We have more than enough humans for the protocol.” He eyed her.
With a sinking feeling in the pit of her stomach, Elianna understood she was in even more danger now. Being singled out for attention in this place of horrors could be a death sentence.

Elianna’s tormentor grabbed her by the arm and yanked her close to him again. “Exactly what we thought, sir. No one’s going to miss one female.” He cupped her breast with his free hand, squeezing painfully. “This is a lonely post—we deserve entertainment.”

With nothing to lose at this point, she kicked him in the knee, knocking his leg out from under him, and grabbed at his weapon as the man fell. Before she could get a shot off, two of the guards attacked her and tore the pulse rifle from her hands. The third guard ran to retrieve the neurocontroller. The officer held up his hand and everyone froze.

“We’re not going to stoop to the level of having sex with the experiment subjects,” he said. “We’re not like those twisted deviant scientists. The military caste has pride, discipline, standards.”

“But, sir, you said—” The guard sounded confused, and Elianna had to admit she was too, but nerves were making her tremble so hard she could barely stand.

What did the officer have planned for her?

“I’ve got something much more interesting and profitable to suggest,” the captain said as if he was reading her mind. “Bring her.”

Following him like sheep, the guards marched her through the corridor, past empty cells of various sizes, all dark, until the procession stopped in front of the only other one showing a light.

A huge feline predator was curled up in the cell, easily six feet tall and maybe fourteen feet long. Elianna shrank against her captors as the beast uncurled to snarl and roar, baring fangs as big as steak knives. Tail thrashing, the creature prowled energetically in the enclosed space.

Knees buckling under her, she wasn’t too proud to beg. “You can’t put me in there. Please, don’t do that. Let me go back to the humans’ cell, I’m begging you.”

“Has he been fed today?” the officer asked in Basic as he ignored her desperate pleas for mercy.

“Not yet.” The guard holding her tightened his grip.

“We know there’s quite a market for vids of the experimental animals fighting to the death, lots of blood and gore,” the officer said. “Imagine what the fans will pay for a recording of a human woman savaged by this creature?” He raised his eyebrows. “Nice bonus for all of us, and we can clean the mess up long before the scientists and techs return from their conference at the main lab.”

One man whistled, and all the Khagrish exchanged gleeful grins. 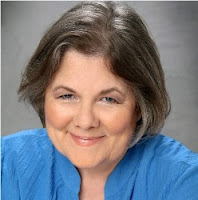 Author Bio and Links:
USA Today Best Selling Author
Veronica Scott grew up in a house with a library as its heart. Dad loved science fiction, Mom loved ancient history and Veronica thought there needed to be more romance in everything. When she ran out of books to read, she started writing her own stories.