Thank you, Diane, for hosting me today. I’m so excited to be here. Dark Wine at Dusk is the third book in the Hill Vampire series, and it was released last week. 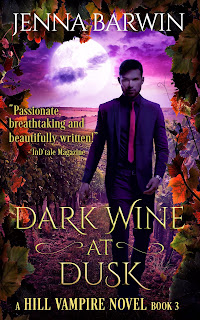 How was the Hill Vampire series born?
I’ve been fascinated by the vampire myth my entire life. I read Dracula as a young teen, and something in me wanted the vampire, the tragic hero, to get the girl. That was my starting point.
What is the Hill Vampire series about?
The series features an exclusive community of winemaking vampires and their mortal mates. They live on vineyard estates in the Sierra Escondida foothills.
Sounds fun. So, it’s a paranormal romance?
Yes, but it also combines murder mystery and political intrigue with the continuing love story.
The series begins with Dark Wine at Midnight, in which research scientist Cerissa Patel must find a way to save humanity from a vampire conspiracy without revealing what’s hidden beneath her skin. But her cover story isn’t enough to fool vampire Henry Bautista—he’s dark, dangerous, and will do anything to protect his town, including stopping her.
So, it’s an enemies to friends story?
The first book is very much a frenemies to lovers story. The series follows the romantic relationship of Cerissa and Henry, who, along with other members of their community, try to stop the vampire dominance movement (VDM), a vampire conspiracy that is trying to kill the leaders of Sierra Escondida and take over. The VDM plans a political coup, and once the path is cleared, will turn mortals into blood slaves.
What’s the heat level?
Steamy. When Henry and Cerissa get together sparks fly!
Who is your favorite character, and why?
The hero, Enrique “Henry” Bautista Vasquez. I enjoy writing him. He’s the first character I created in the Hill Vampire series, and I just loved the process of discovery—peeling back the layers to find out who he is.
What can you tell us about Henry?
He’s originally from Mexico. He came to California in the early 1800s, where he was turned vampire, and founded the town of Sierra Escondida. So he has a deep backstory, entwined with Mexico’s and California’s histories, and I like weaving them together.
He’s also an expert winemaker, with bourbon-brown eyes and long, ebony hair, but he’s a bit moody. Because of a dark secret he carries, he’s been unsuccessful at relationships. He’s also very protective of the town he founded. So when Dr. Cerissa Patel arrives in town, he’s suspicious of her, but also attracted to her, and his suspicion is fighting with the feelings she’s stirred up in him.
Dark Wine at Dusk digs deeper into the VDM conspiracy, but it’s also Henry’s story. The secret he’s kept buried for over a century is revealed, and Cerissa has an agonizing choice to make. In many ways, Dusk is Henry’s book.
Does he get his happily ever after?
No spoilers! But I can safely say it wouldn’t be a romance if he didn’t ultimately get his happily ever after with Cerissa. Still, he has to work for it over the series’ arc.
To put it another way, the Hill Vampire novels are a “same couple series.” I’m a fan of same couple series, so I wrote what I love.
What do you mean by same couple series?
It’s a series of novels following the same couple from their first hot glimpse of each other, all the way through to their marriage and beyond. As a reader, once I’ve fallen in love with a couple, I want to read more about them.
Faye Kellerman did a great job reeling me in with the Peter Decker/Rina Lazarus mystery series. Peter Decker is a police detective and his Orthodox Jewish wife Rina assists him in solving crimes. They have their ups and downs, but I fell in love with them when they fell in love with each other. I happily followed them through their engagement, marriage, kids and ultimately, into retirement.
In the world of urban fantasy and paranormal romance, I swoon over Jeaniene Frost’s Cat and Bones books. She kept the sizzle going through seven books, along with writing very satisfying adventures for her pair. To keep me entertained, the adventure or mystery has to be as strong as the romance, and Jeaniene Frost delivers on both.
It’s what I hope to achieve with the Hill Vampire series.

Blurb for Dark Wine at Dusk:
A seductive spy. An alpha vampire. A hidden threat to their love...
When a rogue vampire group attacks again, Dr. Cerissa Patel's happily ever after with the man of her dreams must take a back seat to her mission.
Her lover, vampire Henry Bautista, is quick to pick up the gauntlet. He'll do anything to help his beautiful spy capture the conspirators who are determined to enslave mortals.
But as Henry's secret past rears its ugly head, it not only threatens their mission, but risks their love--and their very lives.
"Passionate, breathtaking and beautifully written." ~InD'tale Magazine
Excerpt:
Henry accepted the shiny silver pouch Cerissa handed him. Usually, she used a blue bag to package blood from her human clones and a red one when she drew a higher concentration of red blood cells. What did the silver bag contain?
“If you don’t mind being my guinea pig,” Cerissa added.
“Guinea pig?” He started a pan of water heating on the stove. The pouch wasn’t wrapped in a self-warming bag. “What is different about this blood?”
“While I was away, I figured out how to induce the clones to produce a higher concentration of stress hormones—adrenaline, as well as cortisol and norepinephrine, if you want to be technical—to create the blood Rolf craves.”
“You think this will satisfy him?”
“We’ll have to experiment to find out. I don’t know what the cause is. It could be a substance addiction he can be weaned off, with support. If his problem is akin to a deficiency, more like a diabetic who needs insulin to survive, then I’ll have to determine the proper dosage. Just because the blood produces a mental high doesn’t mean it’s bad for him.”
Henry turned off the flame under the pot and slid the bag into the warm water, swishing it around so the contents would heat evenly without cooking. Cooked blood was disgusting.
“There is an exhilaration that comes from drinking adrenaline-spiked blood—”
“I’m calling it ‘adrenaline-enhanced’ for now,” she said. “The other term has baggage.”
“You could be right.” He fished the bag out of the water, cut the corner with scissors, and poured it into an insulated coffee mug. A quick sniff told him it smelled like the blood of a victim who’d been hunted.
Is this a good idea?
He sniffed again, and a thread of apprehension brushed his skin. He took a sip and closed his eyes. The sudden rush pounded through his veins, followed by an ice-cold chill. He dropped the mug on the kitchen island. It toppled, and the blood spread across the granite counter.
Cerissa rushed to his side. “Henry, are you all right?”
He stumbled back, fighting the surge, the power, the desire for more.
“Y-you made it too s-strong,” he stammered, and clutched the edge of the island’s granite top. The spilled blood flowed between his fingers, invoking images he’d rather forget.
“I’m sorry,” she said, clinging to his arm.
Her scent beckoned to him. He gripped the counter harder and fought the driving desire to plunge his fangs into her. “Please, cariña, step back.”
“Henry—”
“Step back. I don’t need new sins to repent for.” 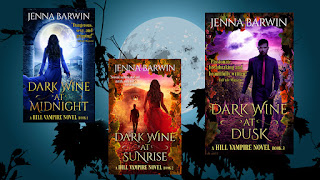 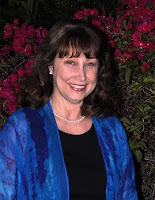