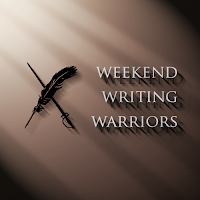 Happy New Year! Each weekend, the Weekend Writing Warriors share an 8 - 10 sentence snippet. Be sure to visit the other authors. You can find them here.
Thanks to everyone who visited last week. Your support and comments always give me new ideas. I'm sharing snippets from The Spy: An Outer Rim Novel. It's the 4th book in my series featuring strong women on the frontier of space.
Because this is a work in progress, suggestions are greatly appreciated. Genna is at headquarters meeting with the Commissioner of the Clandestine Sector of Coalition of Planets Intelligence. Last week's final sentence was Commissioner Vorinda interrupted her thoughts, “. . . pleased to learn that Hallart seems to have abandoned Malcor Sector.”
Please excuse the creative punctuation, necessary to keep this within the guidelines.


The most-feared gangster in the galaxy (slight exaggeration) was everywhere. She hated correcting her superior, but he needed to know the truth.
“No, sir, the new tavern in Astron Colony is a front for Hallart’s operations in Malcor Sector.”
“What’s this?” When Vorinda’s indigo eyes hardened and his face turned scarlet, she worried she’d gone too far by correcting her boss. If he considered firing her, she’d given him ammunition to do it.
Nevertheless, she swallowed past the knot in her throat. Since she’d crawled this far out on a limb, she’d better tell him more. “A Kruferian named Nakus used to be head of Astron Colony Security but was fired for being an incompetent slob. He appears to be a toady but is very smart and is the manager of the tavern.”

On a personal note, my husband came through his surgery with flying colors. He's home and doing well. Thanks for your healing thoughts and prayers. No excuses for not writing now.