Our guest today is my friend Pamela S. Thibodeaux whose book Tempered Fire is now available in audio format. Here's Pam to tell you about her story. 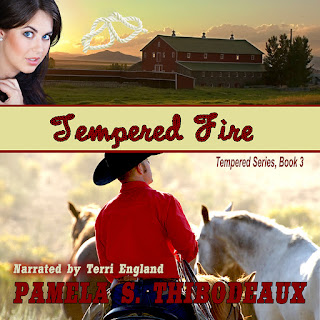 When I wrote this scene in Tempered Hearts ….. Craig shrugged, knowing that he could deny her nothing when she looked at him like that. Just a smile, that particular smile and that look, those eyes, wide, full of hope and pleading, ripped his composure to shreds. She knew it, too, though he doubted she had to force the expression. It seemed to come naturally. Or from years of practicing on her father, he mused silently, thinking he would be made of tougher stock if he had a daughter.

I just KNEW I absolutely had to write the story of Craig and Tamera’s daughter growing up and finding love of her own. So I did. I had no idea, however, that Tempered Fire would be book 3 in a 6 part series!

Blurb: Harris is a good girl on the brink of womanhood. Stanley Morrison is a young man at the start of his life. For each other, they have always felt the fireworks that two people in love should feel. But the questions about his past, his pride, and Amber's father might be the end of what could be a strong relationship. As the two try to protect their budding romance, some unlikely but powerful forces conspire to keep them apart. Will they survive the wishes of everyone around them with their relationship intact?

Excerpt:
Craig didn’t need to ask what was going on when he heard Amber’s excited little cry as she raced down the stairs and outside, the door slamming in her wake. He looked out the window when she flew into the outstretched arms and watched, a worried frown on his face, when Stan hugged her to him, pressing tiny kisses over her face. Her shoulders shook suspiciously. Whether from laughter or tears or both, he didn’t know. A low growl sounded in his throat. Turning on his heel, he strode the three paces separating him from the back door one hand reaching for his hat, the other stretching toward the doorknob.
“Where are you going?”  Tamera’s admonishing voice deterred his mission when she walked into the room.
He hesitated and shot her a glare. “It’s about time I had a talk with that boy.”
She hurried to where he stood and edged herself between him and the door, placing a firm hand on his arm. “Leave them alone, Craig,” she commanded in a soft, steely voice. “Save your ‘honor my daughter’ talk for later.”
“You see what’s going on out there? I won’t have him pawing at her like that,” he snarled.
Tamera moved enough to glance out the window. Stan’s hands were completely visible and not at all pawing. She looked back at her husband, an eyebrow arched.
“Pawing? He’s not pawing at her. What I see are two kids, crazy in love, greeting each other, rather sweetly I might add, after being separated three-and-a-half weeks for a two-week vacation.” He snorted and tried to walk around her.
“Listen to me you arrogant jerk,” she demanded, tightening her grip on his arm. “If you go out there right now you’re going to embarrass yourself and your daughter. Not to mention me.”
His eyes narrowed into dangerous slits of steel and the muscle in his jaw throbbed as it always did when he was angry or upset.
“I never liked it when you used that tone with me. I like it even less now,” he insisted. “Besides, twenty is too old for her.”
Her chin jerked up a notch. Her eyes flashed fire. She rolled them and stood her ground.
“Well, I never appreciated you acting like a jerk. And I like that even less now. Good Lord, Craig, she’s seventeen. How do you figure twenty is too old? You’re nearly five years older than I am.”
“That’s different,” he snarled. “Get out of my way, Temper,” he ordered. Grabbing her by the arm, he forcefully restrained himself from moving her from his path. “This is getting too thick too fast and I won’t let it.”
Though his fingers bore into her flesh, Tamera sighed and placed a restraining hand on his chest. She knew his reaction went far deeper than fatherly concern. He was jealous at sharing her, and that was dangerous. If he went storming out there, he would only succeed in angering Amber. And that was even more dangerous. He would end up pushing her right into Stan’s arms.
“Listen to me,” she urged, her expression changing from anger to pleading. “Let them alone for now. Let them say hello. You can have your talk with him, just not right now. They’re kids, Craig,” she reminded. “If you assume too much too soon and react accordingly, you’re going to regret it,” she warned.
Craig swore vilely and all but shoved her against the door. Turning on his heel, he slapped the hat on his head and stormed out of the room. She was right. Damn it. He knew she was right but he didn’t have to like it.
Links for Purchase:
Audio: http://bit.ly/TemperedFireAudio
Kindle http://amzn.to/1uRR2WW
Amazon Print: http://bit.ly/Zwr3X2
Nookhttp://bit.ly/1VjuesY
B&N Print: http://bit.ly/1mF4CL6
Smashwordshttp://bit.ly/1h4vmLr
Kobo: https://www.kobo.com/us/en/ebook/tempered-fire

*Get a code for a FREE copy of Tempered Hearts, Tempered Dreams & Tempered Fire HERE!

Want a FREE E-copy of Tempered Hearts (book 1 in the series)? Details Here.

Author Bio: Award-winning author, Pamela S. Thibodeaux is the Co-Founder and a lifetime member of Bayou Writers Group in Lake Charles, Louisiana. Multi-published in romantic fiction as well as creative non-fiction, her writing has been tagged as, “Inspirational with an Edge!” ™ and reviewed as “steamier and grittier than the typical Christian novel without decreasing the message.” Sign up to receive Pam’s newsletter and get a FREE short story!