I'm so happy to welcome a fellow Michigander and Mid-Michigan RWA chaptermate, Keri Kruspe. She has a new novel that came out Tuesday, a science fiction romance--my favorite kind of read. I just started reading this last night. I'm captivated by the concept, and the characters drew me right in.

Here's Keri to tell us a little about her new release. 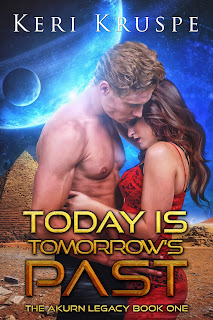 Why I wrote this book

What can I say? I’m a nerd who lives for romance stories. I love all things weird…aliens, vampires, were-animals, time travel, mystical/mythical creatures and sexy beings that help define who we are as a species. When I created my debut trilogy it had to be a sci-fi romance with all the trappings.

I’ve been fascinated by the works of Zechara Sitchin and Erich Von Daniken as well as the History Channel’s Ancient Aliens. My underlying question, if those theories were true, what happens when the aliens come back? From there I got the idea to loosely base my newest scifi romance series on that question. That’s when the first book in The Akurn Legacy, Today is Tomorrow’s Past, was born.


Based loosely on the Ancient Alien theory that Earth had been visited by extraterrestrials thousands of years ago, Today is Tomorrow’s Past is a romantic sci-fi adventure based in contemporary times. Filled with intriguing suspense, sensual longing, and heart-pounding twists and turns.

The aliens we thought were long gone are coming back.
Divorcée Julienne King led a life of stressful chaos that didn’t leave time for anything personal. Immersed in organizing a huge merger for a small bank in Vegas, she uncovers insidious subplots that threatened not only the bank, but appear to have immense ramifications worldwide. With double-crosses at every turn, her next choice for an ally could be her last.
Having just survived a tragic bombing, the last thing Ben Duncan wanted to do was take on a new assignment. However, once he meets the intriguing Julienne, he recognizes there is more to her than anyone knows. But getting involved with the delectable woman is the last thing he’s free to do. His ancestors, the aliens from the planet Akurn, are headed back to kill billions of humans and subjugate Earth. He along with his brothers are targeted to be the first to die.
It’s a race against time. In less than five months, the Akurns will be close enough to invade Earth. Can a banker and a hybrid alien-human overcome their prejudices and not only work together, but learn their love is the key to mankind’s salvation?

At 7:00 on a Monday morning, the bright cloudless sky should have encouraged Julienne King to begin her day with a light heart and an eagerness to start the day. Not stress about going to a thankless, pain-in-the-ass job. Not stress about how she didn’t fit into the life she led. Not stress about her unrelenting urge to search for that elusive something just out of reach—convinced more than ever she was in the wrong place, at the wrong time, while living a totally wrong life. You’d think reaching the pinnacle of Senior Vice President of a small but reputable state bank at the age of thirty-one would cement a soul-satisfying life purpose. Oh no, not her.
Humph. Might as well obsess about her nonexistent love life while she was at it.
She eyed the metal handle of her car door. The stupid thing would be hot. Even this early, it had enough time to soak up the mid-July desert heat of Las Vegas. Using the edge of her suit jacket to protect her fingers, she opened the door. When it flung wide, the inside belched a suffocating, broiling miasma. As sweat broke out, she briefly closed her eyes. Good thing she parked in the shade, otherwise she’d melt into a puddle of messy goo by the time she got to work. Maybe she’d make it there before her makeup liquefied into a Picasso painting. Having been raised in the Vegas foster system, you’d think she’d be used to the scorching heat by now.
Dammit. A quick look in the rearview mirror told her that dream was hopeless. The minute she got to work, she’d have to rush to the bathroom and fix everything that took an hour to put on this morning. God forbid if she dressed there first. Upper management was adamant about bank officers arriving at work professionally perfect.
Well, come to think of it, why worry about what those folks thought? Most of them had already gone. They’d disappeared in a poof of merger-madness. Which, lucky her, made her in charge of what happened to over fifty bank branches statewide.
She turned on the motor of her ten-year-old Subaru. For the umpteenth time, why did she stay at a job that sucked the life out of her? That’s right—because of the three hundred employees whose livelihood relied on the decisions she made. Without her, their fate would be dicey at best.
Julienne’s stomach rolled as the remains of an early cup of coffee sloshed up her throat. Once again, she squashed the urge to drop everything and search for whatever was missing from her existence.  Besides, what was she supposed to do when she found it… whatever it was?

AMAZON/OTHER RETAILERS
About the Author: 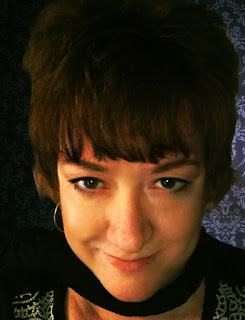 Keri Kruspe, award-winning “Author of Otherworldly Romantic Adventures” loves nothing more than to write about romances that feature “feisty heroines who aren’t afraid to take a chance on life…or love”. Her writing career started when she became irritated that most SciFi romances had women kidnapped before they could find love. Determined to create something different, she turned “the alien kidnapping trope upside down” (Vine Voice) and the ALIEN EXCHANGE trilogy was born.

Keri’s latest SciFi Romance novel, TODAY IS TOMORROW’S PAST, is the first in a five-book series that takes the Ancient Alien motif and mixes it with a romantic twist.
A native Nevadan, Keri is a lifelong avid reader who currently lives in Northwestern Michigan with her husband and the newest member of the family, a Jack Russell Terrier, Hestia. When not immersed in her made-up worlds, she enjoys discovering the fascinating landscape of her new home as well as pairing red wine with healthy ways to cook. Most of all, she loves finding her next favorite author.

If you want to know when Keri’s next book will come out, please visit her website at http:/kerikruspe.com, where you can sign up for her mailing list. You’ll get a FREE copy of the prologue to TODAY IS TOMORROW’S PAST as well as keeping updated on the life of a dedicated, obsessed author.