Today's guest is my good friend, Jean Davis, who taught me what she knows about selling books at craft and vendor shows. She also leads our local writers' group. Here's Jean to tell us about her new release.

Thanks for having me as a guest, Diane!

I've been waiting to share Not Another Bard's Tale with readers since 2008 but never quite had the time to put the finishing touches on the story. It turns out, a pandemic that causes pretty much everything to be canceled for a year offers a writer a lot of unplanned 'free' time. I've been busy both writing new books and wrapping up mostly finished ones. Not Another Bard's Tale is the second of five books I plan to release this year.

Inspired by my teen-love for Monty Python's Holy Grail, and later enjoyment of John Moore's book Heroics for Beginner's, Not Another Bard's Tale leans heavily into the fantasy parody genre. This book is different from my others in that it's far more lighthearted and out to make you laugh. 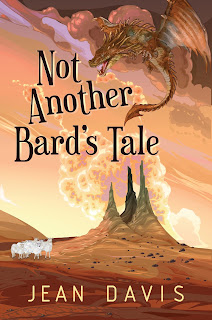 Bruce Gawain has been between knightly quests for longer than he’d like to admit. In the town of Holden, he meets a seer who tells him where he can finally find his destiny. All he has to do is travel to the distant Wall of Nok in Gambreland. With only three coins to his name, Bruce isn’t getting much further than a barstool at the town’s inn.

As luck would have it, the innkeeper’s beautiful daughter Svetlana and her flock of troublesome god-gifted sheep need an escort to Gambreland. With a paying job, everything seems to fall into place for Bruce’s quest… except for Svetlana’s killjoy bodyguard sister, an evil overlord with looming prophecy issues, and a dragon threatening to eat the townspeople until its stolen treasure is returned.

Bruce sets out with his pan-wielding companion Mydeara and the negligibly talented bard, Harold to seek out the Wall of Nok. Will they find Bruce’s destiny, return Svetlana safely home, and save the people of Holden from the vengeful dragon?

Excerpt:
Bruce glanced toward the docks where several ships were moored, their masts bobbing madly as a sudden rush of heavy wind buffeted the sea-side market. Horse-drawn carts raced by and shouting came from the next street over. He gripped the rough wood of the stall and squinted against the blowing dirt to read the poorly painted sign: Holden’s famous Herman! The great seer of the West!
A hunched man in a faded blue robe adorned with what may have been golden stars and moons bared his scant teeth. “I see an auspicious future for you, knight.” He held out an age-spotted hand. “But the details require payment.”
His past hadn’t been all too profitable and presently Bruce was in a state he preferred to call ‘between quests’. If a single coin could give him a push in a better direction it would be well spent. He dug into the coin purse he wore under his armor. He placed a chipped copper disc with a hole in the middle onto the seer’s palm. “That’s one of my last. You better tell me something worthwhile.”
“You listen to old Herman now, my visions always be true.”
People hurried past, glancing over their shoulders. “Get on with it then. The day’s almost done and I need to find the inn.”
Herman cleared his throat with a great hacking cough, followed by a hesitant wheeze and another cough, slightly less phlegm-filled than the last. “Show me your palm.”
Bruce held out his hand, wondering what the old man hoped to see in the fading light. He probably had his prophetic line of mysterious words already on his tongue; the palm was all for show. He scowled, already wishing he’d spent his coin on dinner or a pint of ale.
“All right then.” Herman traced the lines on his palm with thin, wrinkled fingers. “What you seek lies at the Wall of Nok. You must travel far and the way will not be easy.”
A shadow passed overhead, like a brief sampling of nightfall, but then it was gone. Something crashed at the other end of the marketplace. The ground shook. Screams filled the air.
What a load of dung. Bruce yanked his hand away. The evening air grew warm, almost unbearably so within his armor.
The shaking of the ground became more intense. The wooden stalls creaked. A host of people ran by. Shopkeepers watched them. Several abandoned their wares and joined the running crowd. Herman eyed the coin with determination as it bounced about on the quaking counter of the stall.
Bruce made a grab for his coin.
The surprisingly spry seer snatched it up. “When you reach the wall, you will find—”
A giant, green-scaled head atop a long neck lined with wicked black spikes loomed over the booth. Two great golden eyes surveyed Bruce and then locked on to the old man. The dragon’s jaws gaped open to reveal two wicked rows of teeth.
Bruce screamed like a little girl.
The dragon snatched up the seer and chewed with what appeared to be great satisfaction. It swallowed and then picked at one of his dagger-length teeth with a claw. The copper coin fell onto the counter.
The dragon’s rancid, hot breath blasted over Bruce. “You wouldn’t happen to know where the nearest lake is, do you? I always find mystics a bit dry.”
Bruce pointed to the far end of town with a shaking hand.
“Thank you.” The dragon flapped its wings, knocking flat the booth and all of those surrounding it, sending the goods flying in all directions.
As the dragon lifted into the sky Bruce’s reflexes finally kicked in. He drew his sword. Another rush of people, scattered in their efforts to pick a direction in which to flee, flooded through the decimated market.
A young man stopped, gazing up at the dragon and then following its line of ascent to Bruce and his sword. “You scared the dragon off! You saved us all!”
“I don’t know about...” Bruce glanced at the sword in his hand. If he meant to change his fortune, he was going to have to up his advertising game. “Yes. Yes, I did. Fearsome beast, but no match for a knight like me.”
“Behold, our savior!” the man called to all who passed by.

Jean Davis lives in West Michigan with her musical husband, two attention-craving terriers, and a small flock of chickens and ducks. When not ruining fictional lives from the comfort of her writing chair, she plays in her flower garden, visits local breweries, and eats gluttonous amounts of sushi. She is the author of nine books, including a space opera series, The Narvan, two short story collections, and four standalone novels. You can find her at www.jeandavisauthor.com and on Facebook and Instagram @jeandavisauthor