History was made last week. What? You didn't notice? With the deluge of information that swamps us every minute of every day, I'm not surprised. 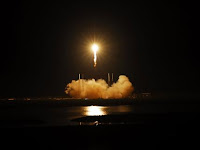 So what momentous event happened? A commercial spacecraft rendezvoused with the International Space Station. Dragon, a craft built and launched by a private company, SpaceX, carried food, clothes and other supplies to the astronauts currently living and working on the station. Before this event, only major governments sent cargo to the ISS. With this success, the way is open to a new era in space travel.

As you know from previous posts here, I'm enthralled by space travel. While some authors wax nostalgic about the days of old when courageous men and women explored and settled the American West, I look forward to exploration beyond the confines of Earth. My stories take the reader into what, hopefully, is our future.

Last fall, I was really bummed by NASA's ending the shuttle program. I should have realized that American entrepreneurs would take over. Visionary billionaires who made their money in other industries like technology, commerce and the arts are filling the void left by a government that can no longer afford what some think of as extravagance. Of course, the new adventurers didn't built spacecraft overnight. Their projects have been in the works for years. Only now that the government has gotten out of the way is good, old American ingenuity and sense of adventure propelling us forward. Halleluiah and amen. In the not-too-distant future, these private companies will not just send cargo into space but passengers. (Gee, do you think they'll charge extra for a window seat or to sit next to your spouse?)

When my mother-in-law passed away at age 102, I marveled at the innovations in travel during her lifetime—from horse-drawn vehicles to landing on the moon. As exciting as watching the moon landing was for me, it happened over fifty years ago. And while I know we are still taking baby steps in our efforts to go beyond our own world, I'm in a hurry. I want to see us venture farther, to "boldly go where no one has gone before" before I die. This latest event is a start.

On a side note, along with launching the cargo-carrying Dragon, the SpaceX rocket also carried the cremains of 320 people, including James Doohan, the actor who played Scottie on Star Trek. Scottie was always my favorite. In fact, he was my inspiration for a secondary character in Switched, a character who continues through the next two books. Though Mr. Doohan died in 2005, he finally got his wish. Last Thursday, it was his turn to be "beamed" up for a final adventure.