The captain has taken Jessie onto the bridge where she meets his crew. She's still convinced she's at a sci-fi convention--not on a starship.

“Captain.” The deep, masculine voice carried a sense of urgency. It belonged to the only other human-like character who was seated at a console to the back of the room. The Science Officer, Jessie thought. “A Tegrorian frigate is cruising toward us.”


“No Tegror ship is supposed to be in this sector,” proclaimed the Navigation Officer. This guy’s make-up was fantastic. Blue, scaly skin, yellow eyes, and tightly-curled indigo hair. “It could have been stolen by the Praetorians.”


Captain Viator stiffened. “We can take no chances. Have they sighted us, Mr. Xaropa?”


“No, sir. The range of the frigate is much shorter than ours.”


“If it is the Praetorians, they cannot be allowed to capture this ship. Mr. Glaxpher, prepare to engage the hyperdrive. Set a course for the Gallerian System.”


Jessie pursed her lips. “Hyperdrive? Aren’t you supposed to go to warp eight, or something?” 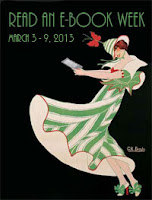 In honor of "Read an E-book Week", Switched is available FREE this week only at Smashwords

Click here to read Sneak Peeks from other authors.
Posted by Diane Burton at 1:00:00 AM