In Profile of Evil, Carly Stone is a brilliant FBI agent who's seen more than her share of evil. Leaving the agency, she becomes a consultant for Indiana County Sheriff Brody Chase, who needs her profiling skills to catch an online sex predator luring preteen girls to their death in his community.


A life hangs in the balance, and the two rush to stop the most terrifying killer of their careers — and time is running out.


There was either a monster living in his county, or using it as a body dump site.  Both options were unsettling, and people were getting nervous.  He was sick of being asked why the murders hadn't been solved, and how close he was to finding the killer.  The avid crime television viewers watched every week as crimes were solved and tied up with a ribbon at the end of the hour.  That it was taking two years to solve the girls' murders was unacceptable to them, and they weren't afraid to voice their opinions — to him, and to the County Commission President, Bradley Lucas, to whom Brody reported.  Bradley Lucas could be a horse's ass when he wanted to be, but to his credit during this investigation, he had remained supportive as long as Brody briefed him frequently.  Not that there was anything to report.


Though he hadn't voiced his theory out loud to anyone but his brother Cameron, Brody believed the two murders were related.  Although two murders did not fit the definition, he thought a serial killer was at work.  He hoped he was wrong.  Because if he was right, the knowledge of a serial murderer at work in Shawnee County would obliterate the tranquility and security most residents had known their entire lives.  Their county was still a place where people left their doors unlocked at night.


Crime had been at an all-time low since he became sheriff.  If he were correct and a serial killer had set up shop in his county, the sick bastard would live to regret it, because Sheriff Brody Chase would stop him if it was the last thing he ever did.


The drive to Perrysville from his office in Morel usually took fifteen minutes, but Brody made it in ten.  Gray curls of smoke in the morning sky and the flashing lights signaled the crime scene ahead as Brody drew closer. Seeing parked vehicles belonging to the coroner, fire chief, crime scene techs, and Cameron's unmarked car, Brody pulled off the road and leapt from the vehicle.  One of his deputies guided him down a dirt lane with a corn field on one side and woods on the other.  He lifted his hand to cover his face as the pungent smoke from the burned car and charred bodies assailed his nose.


Deputy Jim Ryder, lining the area with yellow crime scene tape, greeted him as he approached the immediate crime scene.  "Sheriff, the car is over there."


Brody nodded and said, "Thanks.  Make sure only law enforcement gets past you."


"Yes, sir," muttered Ryder, as he tied the yellow tape around a tree.


Following the deep tracks of the fire engine in the soft earth, Brody reached the scene where a red, late model Toyota Corolla was in the early stages of a fire that was being extinguished by a firefighter. Brody figured the fire truck must have gotten there in record time to arrive before him.  Because the department was largely volunteer, it sometimes took up to an hour or more just to get the fire truck manned before it could leave the station.


With his hands clasped behind him, Brody scanned the perimeter.  A new red plastic gas can lay inside some brush, and a crime scene tech took photographs of it before she stored it in an evidence bag. The car's body was charred, but the numbers and letters on the Indiana license plate were visible.  He moved closer to the front of the car, where he saw a body hunched over the steering wheel in the driver's seat.  He headed toward the back where Cam, Fire Chief Wayne Lansky, and a couple of crime scene techs were huddled around the open car trunk, but Brody couldn't see inside.


As he approached them, his chief detective, Cameron, moved aside.  What Brody saw in the trunk made his stomach churn as bile rushed to his throat.  A small, burned body lay inside the trunk in a fetal position.  The acrid smell of burning flesh nearly overwhelmed him as he moved closer to examine the body, with Cam close behind him.


Sweet Jesus, what kind of a monster could do this to a child who should be curled up and asleep in bed, not charred in the trunk of a car?


"We got lucky, Brody," said Cameron.


"I doubt the victims would agree with that."


"I meant we're lucky the car didn't burn any more than it did.  We need all the evidence we can get."

Get your copy today at:
Amazon: http://amzn.com/B00COA6MX8 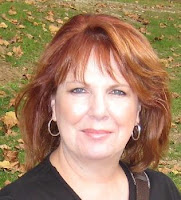 Alexa Grace's journey started in March 2011 when the Sr. Director of Training & Development position she'd held for thirteen years was eliminated. A door closed but another one opened. She finally had the time to pursue her childhood dream of writing books. Her focus is now on writing riveting romantic suspense novels.
Alexa Grace is listed in top twenty of Amazon's Top 100 Most Popular Authors in the categories Romantic Suspense and Police Procedural.  She was named one of the top 100 Indie authors by Kindle Review.  A chapter is devoted to her in the book Interviews with Indie Authors by C. Ridgway and T. Ridgway. Her books Deadly Offerings, Deadly Deception, and Deadly Relations have consistently been listed in Amazon's Top 100 Bestselling Romantic Suspense and Police Procedural Books. Deadly Deception, Deadly Relations and Deadly Holiday are ranked #1 in the top 100 Top Rated Books in Police Procedural Books.

Profile of Evil, the first book of the Profile Trilogy is available at major online retailers.
Alexa earned two degrees from Indiana State University and currently lives in Florida. She's a member of Romance Writers of America (national) as well as the Florida Chapter.

Her writing support team includes five Miniature Schnauzers, three of which are rescues. As a writer, she is fueled by Starbucks lattes, chocolate and emails from readers.