Saturday Sampler - Amanda in the Summer by Brenda Whiteside 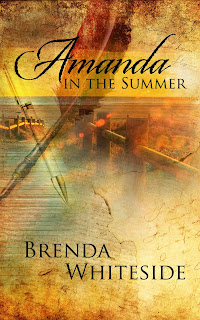 Amanda in the Summer

Blurb:
Three generations of women…and the secret that strengthens their love.

A line of women, all named Amanda, stretches back for generations. Each with her hopes, her joys, her pain—each pouring out her heart in correspondence with a dear family friend who shares their lives, understands their loves, and joins in their sorrows.

But within the correspondence lies a secret. And as the youngest of the Amandas retraces the journey through the years—beginning in post-war America and following through to modern day—the letters reveal, layer by layer, the Amandas who came before her. Soon, the truths and lies hidden in the letters lead her down a path of self-discovery that forges a bond between her past and future.

A few days of bliss with no one to talk to but the
seagulls. I have you to thank for this. I’m so glad you
popped back after Amanda, Robert, and Mother left. The
strain I put on all of us while you were here would’ve
dragged on for who knows how long if you hadn’t
returned. Once again, Tilly, you read the tea leaves and
righted things.

My moods have been so ragged of late. Jealousy of
all things. Jealous that you could talk to my daughter,
get along so lovely with her, which I’ve had difficulty
doing these last few months. Jealous of your longer
running friendship with Robert than with me. I’m not
sure if I was jealous of him or you. You’re both mine.
And angry that the two of you are uncomfortable around
each other after so many years and not making sense of
that. When Robert left, I tried to give him the blue
swimsuit you had left behind and asked him to drop in
on you to return it. He said no, I could do it when I got
back. This was so unlike him and did more to unsettle
me...

Brenda spends half her time writing stories of discovery and love. The other half is spent tending vegetables on the small family farm she shares with her husband, son, daughter-in-law and granddaughter. Together, they’ve embraced an age-old lifestyle that has been mostly lost in the United States - multiple generations living under one roof, who share the workload, follow their individual dreams and reap the benefits of combined talents.

Although she didn’t start out to write romance, she’s found all good stories involve complicated human relationships. She’s also found no matter a person’s age, a new discovery is right around every corner. Whether humorous or serious, straight contemporary or mystery, all her books revolve around those two facts.