Saturday Sampler - It's You & Me, Babe 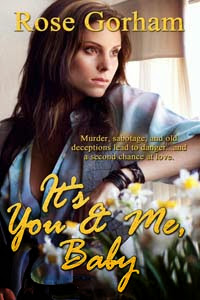 BLURB:
What Janet Sanderson didn't need besides being stalked was Brad Temple on her doorstep with the news that his brother Martin is dead. Six years ago Janet had thought it was Brad's lie that had torn her world apart. But putting the pieces together, she and Brad realize they both had been duped by Martin just so he could get rid of Janet and his unborn child. Confronted with the truth, can Janet set aside the past to help Brad decipher Martin's cryptic notes that may point to his murderer? Will Janet's stalker thwart Brad's second chance with the woman he loves?

EXCERPT:
I’m truly sorry for you and your mother’s loss, Brad, and the Rebecca will never know her father. But if you’re waiting for me to breakdown and cry, it isn’t going to happen. Is that it?”
“Damn it Janet! Hell no, that’s not it!” he sighed and rubbed his temples. “How about giving an old friend a cup of coffee and a couple of aspirins?”
She glared at him. “Old friend!  After what you did?”
He jerked his tie loose. “Me? Martin was the one who turned you out.”
“After you told him I was carrying your child!” She watched his face lose some of its color.
“What the crap are you talking about?”
Janet’s heart pounded. Either he had no idea what she was referring to or he was a damn good actor. “Martin dumped me because you told him we had sex, and that I called I was carrying your baby. I couldn’t believe you made up that story. I thought we were friends!”
He gaped at her then said, “Martin told you I said that?”
Janet slapped her hands on her hips and glared at him. “Why would I lie after all these years?”
“And you believed him?”
“I didn’t want to but he went into great detail. He said you cried and told him we had too much to drink and we only did it that one time, and how sorry you were. He made it sound so convincing. Hell, yes, I believed him!”
“The bastard!” Brad ran his hand through his hair again and Janet saw that it trembled. He looked at her and said quietly, “Martin told me he kicked you out because he found you in bed with another man.”

BIO: Rose Gorham
I worked as a librarian for sixteen years in a small town in the Midwest where I live with my husband Larry. Our children are all grown and married and live only a few miles away, making it easy for us to visit the grandchildren
My enthusiasm for romance novels began years ago when my sister-in-law loaned me a Harlequin Romance called Dark Star by Nernia Hilliard. That one book and I was hooked on romance and forever-after. But after awhile I wanted more than a love story. I wanted murder, mystery, mayhem! So I started reading Romantic Suspense.
As far back as I can remember I’ve always enjoyed people watching and would make up little scenarios about them in my head. What I hadn’t realized was that those mind exercises were my prelude into writing. But it wasn’t until after I had my third child that I put pen to paper. Larry worked the night shift; once the kids were tucked into bed, I’d take out my pad and start writing.
At that time I considered myself a closet writer because I didn’t want anyone to know I was attempting to write a novel. In a moment of bravado I told my husband and my brother Joe. I thought they’d laugh; instead they encouraged me. It was easier after that to talk about my writing. I bought a computer. I joined RWA and found a chapter close to home. With the help of another writer friend, we formed a critique group.
My favorite hobbies, walking and taking pictures of animals and nature help to clear my head when I’m having a problem with a plot or when one of my character’s gets snippy and decides to rewrite the story.


Although I enjoy reading almost any genre, I love writing Romantic Suspense with a touch of humor. It doesn't take much to stimulate my writing juices, and before I know it I'm building a plot, casting my characters, and choosing a weapon. Which reminds me, never pick up an ice pick at a garage sale turn to your husband and say, ‘Hey, hon, wouldn’t this make a great weapon?” People tend to eye you suspiciously.

https://twitter.com/rose_gorham
Posted by Diane Burton at 1:00:00 AM

Email ThisBlogThis!Share to TwitterShare to FacebookShare to Pinterest
Labels: It's You & Me Babe, Rose Gorham, Saturday Sampler