A Killer Past by Maris Soule Tour & #Giveaway 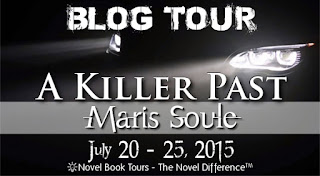 I am pleased to have Michigan author Maris Soule here today. I've admired her work ever since I met her more than twenty years ago. Here she is to tell you about her new release, A KILLER PAST.

Thank you, Diane, for inviting me to your site. You write about other worlds and switched identities. Seventy-four-year-old Mary Harrington lives in our world, in a small town in southwest Michigan, but who is she, really?

Her friends would say Mary is the widow of the local dentist, mother of a financial advisor, and loving grandmother to an eighteen-year-old granddaughter.  Her neighbors actually know little about her other than she goes to the gym regularly and just recently had her picture in an article about men and women staying active in their seventies, eighties, and nineties. No one realizes what Mary did in her twenties—really did—or what her name was back then.

If the two teenaged gang members had known, maybe, when Mary’s car broke down just two blocks from her house, those boys wouldn’t have considered her an easy target. And maybe if one of the boys hadn’t grabbed her arm, she wouldn’t have reverted to old habits. She’s pleased with herself for not killing them, but not pleased that a police sergeant is now investigating the incident. No matter how many times she tells him she wasn’t the one who put the boys in the hospital, he keeps nosing around, looking into her past.

A Killer Past was a fun book to write. It’s an action packed suspense as Mary tries to protect her family, save her own life, and convince her son that just because she has some bruises, she doesn’t need to go into a retirement home. There’s also a touch of romance as Sergeant Jack Rossini goes from simply being curious to truly caring what happens to Mary.

I can picture Helen Mirren as Mary Harrington, and I wish I had some of Mary’s physical and mental abilities, but I guess I’d have to go to the gym more often, and I certainly don’t want to kill anyone.

A Killer Past was first published in London, England last March by Robert Hale Ltd. and was released in the US and Canada in June. It is available as both a hardcover and e-book and can be ordered from Amazon.com and BarnesandNoble.com or from ipgbook.com 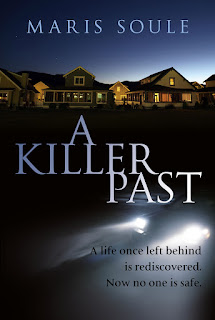 Most people in the town of Rivershore, Michigan view Mary Harrington as a quiet widow whose only oddity is that she spends a lot of time at the gym. Her son thinks it’s time for her to move into a retirement home. Two gang members think she’ll be an easy target. No one in Rivershore knows what Mary did in her younger years—really did—but the two gang members discover they’ve underestimated their victim . . . and Mary fears reverting to old habits may have jeopardized her future.

Mary limped into her living room and sagged into Harry's Lazyboy. Her heart hadn't stopped pounding since she'd left the two boys. Even though pain radiated up her leg, the adrenalin racing through her body overrode the sensation. Excitement clashed with fear. My God, what had she done?

The boys hadn't been content to simply take her purse and run. Oh no, they wouldn't leave it at that. The short one blocked her escape while the tall one looked inside her purse. He said a twenty wasn't enough, wanted to know where she'd put her credit cards, where she lived. They'd threatened her.

When the tall one grabbed her arm and reached for the lapel of her jacket, she didn't even think before she reacted. Forty-four years might have passed, but her body automatically responded with ingrained moves. A shift of position, one step back, and she had her assailant off balance. She used her cell phone as a weapon, jamming the edge hard against the bone of his forearm. As she applied pressure, a sweep of her foot, along with a twist to her side, had him falling forward. The moment he hit the ground, she dropped down and slammed her knees into his back and ribs. Before he could react, she used the edge of the cell phone to cuff his ear, then grabbed his arm and gave a violent twist. He started screaming right after she heard his shoulder pop.

A quick roll to the side put her on her back. The short one stared down at her, his mouth open and his eyes glazed with confusion. She knew she didn't have much time, but springing to her feet was not an option. Her joints might remember the moves, but age had robbed her body of its elasticity. What once had taken a single maneuver now required three stages, but she was on her feet before Shorty truly understood what was happening.

She used the cell phone in her hand to deliver the blow to his face, a side kick took out his knee, and a chop to his neck put him down on the ground. In the past, she would have finished him off then, finished both of them off. She knew the killing points. Two strategically placed jabs, and both of the boys would be eliminated, no more threatening old ladies.

But that was in the past.

"You stay where you are," she demanded over their whimpering.

She retrieved her purse from where the tall one had dropped it, gave the pair one last glance, and turned away. Breathing hard, she hoped she wouldn't have a heart attack before she reached her house.

Wow. All I can say about this book is WOW. Since reviews should include more, I’ll say “Criminals, watch out for Mary Harrington. She will take you down.” Looks are deceiving. Two gang members find out the hard way that 74-year-old Mary can kick butt. When Detective Jack Rossini probes into the situation with the injured gangmembers, Mary’s hidden past is about to be revealed.

The outstanding pace of this thriller made me read way into the night. Mary’s character, though flawed, is very believable. Her son’s overprotectiveness, Jack’s bulldog determination, her granddaughter’s enthusiasm for adventure add depth to the story, making the characters come alive. The setting is very well done. Although the town of Rivershore, Michigan is fictitious, the reader is grounded by references to real places. Well done, Maris Soule.

a Rafflecopter giveaway
Posted by Diane Burton at 1:00:00 AM