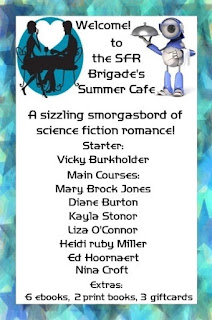 Welcome to Week 6 of the Science Fiction Romance Brigade's Summer Café. We're all about Space Opera this week.
Whenever I hear or read the term “space opera” I think of Star Wars. A little guy destroys a galactic empire. Big, sweeping drama. A romance that seems incidental but gratifying. All told over three big (money-making) films.

My Outer Rim series, which pales in comparison to George Lucas’ saga, has the same space opera component. Little “guys” (actually fems) dare to take on the biggest, baddest galactic villain just short of the Emperor. The kicker is they didn’t mean to. My heroines are just minding their own business—Celara, a cargo hauler; Jileena, a geologist; Rissa, a bartender—when their lives intersect with the gangster Hallart. Since the series’ theme is “strong women surviving on the frontier of space,” you know a fem has to take down Hallart. How? I haven’t figured that out yet. How many stories? As many as it takes.

THE PILOT:
Life on the frontier of space is hard enough so when pirates stole Celara d'Enfaden's cargo, she vowed not to be tricked again. Determined to make an example out of indie pilots who disobey orders, Coalition Administrator Trevarr Jovano impounds Celara’s starship and cargo. If he backs down, he’ll lose respect. If she can’t deliver her cargo, she’ll default on her loan and lose her only home—her ship. More important than her ship, though, is her brother. To rescue him from a galactic gangster, she’ll even work with Jovano who is bent on avenging his wife’s murder.

THE CHAMELEON:
Socialite Jileena Winslott has perfected the image of the spoiled, rich, bubble-headed daughter of an industrial magnate. In reality, she’s a smart, savvy aide to her father in social situations where she is his eyes and ears. She yearns to be her true self and run the family business. When her father sends her on a covert mission to the Outer Rim, she has the chance to prove herself. Big problem. He insists she take along a fake fiancé—the man she’s secretly loved for years.

In the close quarters of her ship, Laning and Jileena discover they aren’t who they seem. Pirates, weather, and her recklessness threaten to derail the mission. As Laning and Jileena revise their impressions of each other, they’ll have to make hard choices about their goals.

THE PROTECTOR (COMING THIS SUMMER)
After tavern owner Rissa Dix rescues two girls from a slave ship, she must rally the townsfolk to prevent traffickers from raiding the frontier colony, but she’s met with apathy and disbelief. Because she lost her own baby to traffickers, she’s determined no other mother will suffer the same heartache. Industrialist heir Dillan Rusteran aids her in rescuing more children. Little do they know they’re about to tangle with a trafficking ring that puts Rissa in danger. Dillan’s loved her for ten years despite her claim she’s too old for him. As they fight the traffickers, will she finally see him in a new light?

The month after I married in1972, I found an interesting recipe in The Detroit News. Although it isn’t kneaded, I like to think my bread is similar in taste to jambor, the bread of the Outer Rim.

[from start to finish, approx. 3 hours]

Combine milk, sugar, and butter in mixing bowl. Cool to lukewarm. In a separate bowl, add yeast to water. Still until dissolved. Add to milk mixture. Stir in onion soup mix then flour to make a soft dough. Stir and blend for about 2 minutes. Cover and let rise for about 45 minutes or until double in bulk. Grease a 1½ quart round casserole bowl. Stir dough down. Beat vigorously for ½ minute. Turn into casserole. Cover and let rise until double in bulk.

An excerpt from THE PROTECTOR:

Dillan woke up to a steady thump-thump-thump. Damn, the sublight engine was acting up again. He rolled over and almost fell out of bed.
Two things hit him at the same time. He wasn’t in the wide, comfortable bed in his quarters aboard ship and the thumping wasn’t his sublight. Thank the stars for that.
After dressing and taking care of his needs in the small san-fac near the stairs, he ambled down carrying his boots in the event the big Zebori was still asleep. Although how anyone could sleep through all that thumping he had no idea. He followed the noise into the kitchen.
Rissa stood at the island kneading dough. Last night he remembered how much higher than normal the island was. She’d built it to accommodate her height. For a moment, he just watched her as she concentrated on her task. Several lumps of grayish-brown dough sat on the flour-covered table waiting their turn. Even though he was a few meters away, the yeasty scent hit his nose and brought back memories of the times he’d been there before. And how much he enjoyed her company. Despite her treating him like a kid.
The dark haired teen—Pela?—worked alongside Rissa. She noticed him first. Panic crossed her strong features before she murmured to Rissa.
“Good morning, sleepyhead.” She laughed as she turned the dough she’d been punishing into a long, loaf pan. She picked up another lump and went to work on it.
Dillan yawned. “What time is it?”
“Almost Mid-Day.” With her forearm, she wiped the sweat off her brow then went back to kneading. “Pela, you did fine. Turn that one into the next pan then get Dillan a cup of sheelonga tea.”
Pela eyed him with uncertainty.
“I can get it.” He sure didn’t want to upset the girl. “Mugs still next to the sink?”
Rissa looked surprised that he remembered. He remembered everything about her. She’d stayed in his mind after every trip from the time he was sixteen.

Did you notice the word "giveaway" in the title of this post? Here's the Rafflecopter so you can enter.

To visit the other authors participating this week, see their links below.

FMI about the Summer Café, click here.  Meet all the participating authors and enjoy their books and delicious recipes.