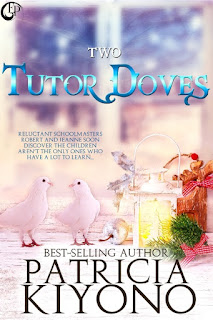 Two Tutor Doves is a sequel to The Partridge and the Peartree. Both are regency Christmas novellas.

Blurb for Two Tutor Doves:
Robert Townley prides himself as an efficient and indispensable valet to Phillip, Duke of Bartlett. But when Robert is coerced into teaching the poor children at the duchess' chapel school, he’s out of his element. Thankfully, he has assistance from some of the other servants, including the prickly Miss Brown.
Jeanne Brown is lady’s maid to the Duchess of Bartlett. She loves working with the children but can’t abide Robert’s lofty attitude toward them. She’d love to put him in his place — but she needs her job.
When the duchess decides to hold the school’s Christmas party in her home, Robert and Jeanne must put aside their differences and work together to ensure that the holiday celebration goes off without a hitch. Will they be able to endure the partnership, or will their sparks ignite something more?
Excerpt:
Since Phillip was at Parliament, Robert had the rest of the afternoon to himself. He packed a light bag and left the house through the servants’ door and made his way to Bond Street. He needed to think, and exercise always helped him clear his head. A round or two in Gentleman John Jackson’s Saloon would be the perfect way to accomplish that.
The smell of sweat and tobacco assaulted him as he made his way up the stairs to the training floor. At the top of the stairs he paused to drink in the welcoming atmosphere. It had been far too long since his last visit.
“Robert. Where’ve ye been, old boy? Bet you’re gettin’ soft.” Ralph Wilcox, one of the saloon’s trainers, slapped Robert on the shoulder. “Get yourself ready, and I’ll go a round with ye.”
Robert grinned at his old friend. Ralph had been his trainer since the first day his father had taken him to Jackson’s. Geoffrey Townley loved his son, but he hadn’t been the nurturing sort. His wife’s death had left him with a young boy and no idea how to raise him. All he knew was his duty to the Ninth Duke of Bartlett. Fortunately, the duchess had taken a shine to Robert and encouraged him to stay in the mansion as a companion for her son Phillip, who was about the same age. An extra cot was set up in the valet’s room, and Phillip was raised with the duke’s children. Still, the elder Townley had been careful to see his son understood the difference in their stations. “No matter what young Phillip says or does, he is still your better,” he’d told his son. “He’ll be the one with all the privileges, and it is your job to see that he gets them.”

She lives in southwest Michigan with her husband, not far from her children, grandchildren, and great-grandchildren. Current interests, aside from writing, include sewing, crocheting, scrapbooking, and music. A love of travel and an interest in faraway people inspires her to create stories about different cultures.