Have you ever been to a conference? Keynote speaker, workshops every hour, luncheon speaker, more workshops, appointments with agents or editors. Very informative. In fact, so informative it feels like your head will explode if you hear one more fact.

What about a retreat? According to dictionary.com, there are numerous definitions for the word retreat:

1.      the forced or strategic withdrawal of an army or an armed force before an enemy, or the withdrawing of a naval force from action.
2.      the act of withdrawing, as into safety or privacy; retirement; seclusion.
3.      a place of refuge, seclusion, or privacy:
4.      an asylum, as for the insane.
5.      a retirement or a period of retirement for religious exercises and meditation.

Think about definitions #2 and 3. For writers. A retreat from harsh reality. An escape from rejections, writer’s block, a family who doesn’t understand a writer’s needs, industry dire predictions. Like any occupation, writing can get you down. The worst is that writing is a solo job. You’re on your own.

Every year since 1985, my writers’ group (Mid-Michigan RWA) sponsors the Retreat From Harsh Reality. (I wrote about the retreat last April after it was over, when I was still riding the high from this great event.) Originally, the chapter members wanted a “pajama party” where they could hang out, talk, relax, share. One of the members gave a talk about writing or the industry. No agents, no editors. No business suits. Jeans and T-shirts were proper attire. A real laid-back weekend where writers could recharge their batteries.

We now have an outside speaker—last year, Rita Clay Estrada came; this year, it’s Christie Craig. Besides one talk, our speaker hangs out with us. We get to know her and vice versa in an informal setting. No longer do we stay in college dorms. A lakeside resort is a lot more comfortable. 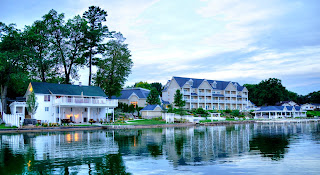 I’ve attended both conferences and retreats. Each has benefited me. I’ve learned a lot at conferences, met industry professionals, made contacts. At this point in my career, I prefer the retreat. I always return home refreshed, renewed, and energized.

If you’d like more information about Mid-Michigan RWA’s Retreat From Harsh Reality, go to http://www.retreatfromharshreality.com/

What works best for you? An organized conference or a laid-back retreat?