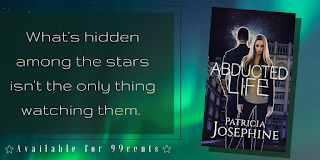 The motivation behind Abducted Life
I've had people ask me where I get my story ideas, and usually, my answer is "I don't know. They just come to me." Which is true. I don't always remember what triggers a story, but sometimes I get lucky and do remember, though. Abducted Life is one story whose idea I remember where it came from: A dream.
Yeah, I know, cliché much?

But it wasn't I woke up with the dream fresh in my mind and started writing. I actually don't remember much about the dream. What I do recall is a guy in a silver prison trying to escape and he was a vampire, and the reason he was a vampire was because of aliens. I woke with the idea "What if vampires and werewolves were the result of alien experimentation?" After that, I can't remember how the story developed. I probably just started writing as per my usual fashion and let my imagination take me wherever.

Savannah Janowitz’s perfect life was destroyed the night she and her boyfriend vanished without a trace. When she reappears a year later––alone––she’s a shell of her former self. Robbed of her popularity and her boyfriend, she has no memory of what happened to her. Savannah struggles to move forward as strange, new abilities manifest.

Evan Sullivan never gave extra-terrestrials much thought until the night he and Savannah were abducted. While Savannah’s memory was wiped clean, he remembers every horrific detail. Constantly reminded of the experiments that made him less than human, Evan hides in the shadows and watches Savannah rebuild her life without him. But neither can let the other go.

When their paths cross, Savannah and Evan finally see a glimmer of their old lives return. As they face what happened to them, they soon discover they aren’t safe. There’s more to fear than what’s hiding in the stars.

Returned Home––Abducted Life Teaser
White-hot light stung his eyes. The roar of an engine shook his eardrums, threatening to burst them. His arms and legs were pinned to the cold ground. Above, a massive craft hovered. It was black and sleek, like a giant Porsche with wings instead of wheels. Turbines beat out a frantic rhythm, and yellow lights flashed along its belly. With a low warble, the craft lifted up, vanishing among the stars in a matter of seconds.

Silence settled over the field. He rose to his feet. His only thought was to reach the girl lying motionless nearby. He stumbled across the flattened grass to Savannah. Her skin was washed white in the moonlight, and her strawberry blond curls were in tangles. She didn’t respond to his touch, but her breathing and pulse were steady. He gathered her into his arms.

In the distance, sirens wailed. Headlights raced down the road toward them. Panic lodged in his throat, and he bolted up. If they saw him…

The unconscious girl sprawled at his feet made him pause. He reached for her, but the dark green stripes coloring his arm made him recoil. He couldn’t allow her to see him either. She wouldn’t remember and would be repulsed with what they had done to him. He curled his fingers into a fist and ran to the edge of the field where the trees promised safety.

Hidden, he watched the police cars turn onto the field, kicking up dust in their wake. They skidded to a stop. Their headlights illuminated Savannah. Officers hurried to her with their hands on their guns. One knelt next to Savannah and placed two fingers on her neck.

“Is it her, Jimmy? The Janowitz girl?”

“But where did she disappear to? It’s been a year since she and Evan Sullivan went missing in this field.”

The officer beside Savannah shook his head. He stared at the starry sky. “Dunno.”

An ambulance’s red and white lights flashed in the darkness. Its call was mournful. The paramedics tended to Savannah. She woke as they worked. Tears blurred his vision when she whispered his name.

But he wasn’t. He sank into the shadows of the forest and vanished.

Available for 99cents at Amazon.

Patricia Josephine never set out to become a writer. In fact, she never considered it an option during high school and college. She was all about art. On a whim, she wrote down a story bouncing in her head. That was the start of it and she hasn't regretted a moment. She writes young adult under the name Patricia Lynne.

Patricia lives with her husband in Michigan, hopes one day to have what will resemble a small petting zoo, has a fondness for dying her hair the colors of the rainbow, and an obsession with Doctor Who.

You can find her lurking on Twitter, Google+, Goodreads, and Wattpad. Find the latest news at her website or sign up for her newsletter. A link to all her books can be found here.