Jean Davis is the force behind the Holland (Michigan) Area Writers. I met her online a couple of  years ago then face-to-face when we did a signing (one she set up) during the Tulip Time Festival. What a dynamo!

Jean has a new release that I'm happy to share with you. 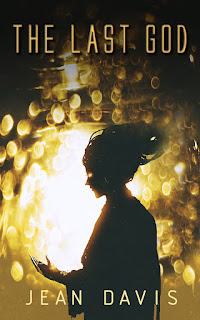 Blurb:
The General of the Unlata Kai has decreed that the time of her people is over. Jane’s race of god-like beings has caused enough chaos, leaving floundering hybrid races and war-ravaged planets throughout the universe. Kaldara, their home, is about to fulfill her wishes. When the planet goes, it will take her and the last of the Unlata Kai with it.

Logan Klevo sets out with the crew of the Maxim on a mission to warn the leaders of Kaldara of their imminent demise. Their announcement triggers a violent battle between gods. One of them holds knowledge that could restore the Maxim to its full strength. The possibility of a defense against the ruthless army of Matouk that destroyed Logan’s homeworld fills him with something he’s been missing, hope.

Abducting an angry and suicidal god might not be a wise choice, but if the god of war can learn to love they both might discover a future worth living for.

Logan watched in horror as the king left the side of the queen and erupted into a towering being of light.

And then that’s all there was, heat and light. He shielded his face with his arms. Huddling against the wall, he blinked rapidly and waited for the ringing in his ears to subside while he got his bearings.

Beside him, Colonel Rice swore. “What the hell was that?”

Logan had no answers. He could only attest to witnessing the woman he’d seen when they’d entered the massive chamber cover herself in the same golden suit of armor they’d spoken with. Then she grew taller, brighter, glorious. Though his mind reeled with what he’d seen and he was only half certain this wasn’t another one of his nightmares, he hazarded a glance to where the king and queen had been.

The two beings of light exchanged blows of massive proportions. Bombs of energy exploded against their bodies. He couldn’t fathom how either remained standing.

“I’m pretty sure the queen exploded,” he said, knowing how absurd that sounded but having no other explanation.

Everyone else in the room had gone to their knees when the king had stood. The uniformed men that they had followed back here, now had their arms outstretched and their faces plastered to the floor.

While beings of light danced in his vision and bombs exploded against his eardrums, he achieved a single glimpse of clarity. Everyone who had been near the throne was blackened. Dead. Bile rose in this throat.

A thunderous clamor claimed his attention. He tore his gaze from the bodies to see the being of white light, what had been the king, sprawled among the remains of the thrones. He dimmed and then was nothing more than a battered and bloody man. His crown lay at the bottom of the stairs.

A shimmering sheet flowed from the General to hover over him and Rice. The ground beneath them rocked and the walls shook. The ceiling above began to crumble.

The colonel didn’t move. He found he couldn’t move either. He wasn’t easily scared, but he had no idea what was going on here and safety anywhere on this planet was questionable.

Without taking his eyes off the General, he said, “We’ve overstayed. The planet is going to go with us on it.”

Debris thundered down on the sheet above them. A shield of some sort.

Logan prayed their ship wasn’t being crushed where they’d left it with the rest of their team inside. Then he wondered if he should hope that they’d left. He and Rice might not make it back. The shield didn’t look able to stretch that far. In fact, it didn’t even go as far as the archway.

A giant explosion struck the General. For a moment he was blinded again. Another blast of scorching air blew past them, though it seemed the shield protected them somewhat as the heat wasn’t near as intense as the first time.

The King was gone. Only a large scorch mark on the floor where his body had been. The General lay sprawled on steps, her feet just below the thrones. Her armor missing the golden glow and blackened. Blood dripped down the steps from the seam at her neck where her head was suspended over the edge of one of the stairs. She lay on her back as if she’d been blown over, unable to catch herself.

She was still moving. Slowly, but twitching enough to indicate she wasn’t as bad off as the rest.

“Agreed.” Yet, Rice crept forward instead of back the way they’d come.

Following behind, they checked the bodies of the others as they went. All of them had burnt to death. Pain on his own arms registered. He glanced down to find them blistered. Rice’s face and neck was red. He guessed his was too by the tightness that hit him now that the shock had worn off. His clothes were singed.

“Good thing we weren’t any closer,” Rice said, working his way toward the armored woman.

Logan rushed up the stairs. He knelt beside the General, who seemed to have returned to her original size. She weakly pushed him away but said nothing beyond a faint moan.

She pushed at him again. He tugged on the helmet, trying to free her head so he could better assess the damage.

The voice that came from the blackened metal face was a ghost of the powerful voice that she’d used earlier, barely a whisper. “Leave me.”

He pushed her hand aside and felt up the back of the armor, searching for a lever or latch of any sort. There was nothing there but blood. He wiped his hands on his pants. “How do you get this thing off?”

“You don’t.” Her voice grew slightly stronger. “Now go, I can’t hold the shield much longer.”

Rice crouched down beside them. “You’re coming with us.”

Author Bio:
Jean Davis lives in West Michigan. When not ruining lives from the comfort of her writing chair, she can be found playing in her garden, enjoying a glass of wine, or lost a good book. Her novels include The Last God, Sahmara, and A Broken Race. Her short fiction has appeared in Theian Journal, Bards and Sages Quarterly, Acidic Fiction, Tales of The Talisman, The First Line, Allegory, Isotropic Fiction, Liquid Imagination, Brewed Awakenings II Anthology, and The 3288 Review.

In celebration of the release of The Last God, Jean is offering her fantasy novel, Sahmara for .99 for a limited time.
Amazon / Apple / Nook / Kobo / Scribd / 24 Symbols / Inktera