#NewRelease: A MURDER OF PRINCIPLE by Susan Coryell

I'm happy to share some great news. Susan Coryell has a new release. I was fortunate to receive an Advanced Reading Copy of A MURDER OF PRINCIPLE for review (see below). As a former teacher myself, I especially enjoyed the setting for this murder mystery. 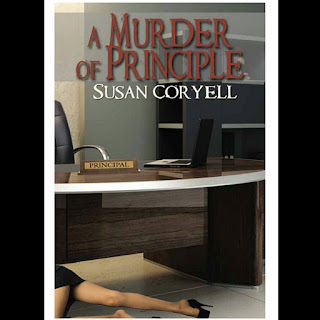 What happens when an unscrupulous principal threatens to destroy a model high school?
Blurb:
A new principal takes Harding High by storm, wreaking havoc with every executive order, every decision, tearing down the stellar school tenet by tenet. Teachers, other administrators, students, parents—the community at large increasingly react to the tremors shaking Harding High as Principal Wendy Storme churns a destructive path through their traditions, values and protocol. Everyone seems to have a valid motive for murder.
English department chair, Rose Lane, and her rookie sidekick, intern Penny Bright, are determined to move the hurricane force Storme out of Harding for good…except that somebody beats them to it with the decisiveness of murder.
Excerpt:
With a blast of nerves,
Rose pushed open the door and moved inside the large, windowless room. Settling her eyes on the principal’s desk, she noticed that the woman’s position was oddly out of the ordinary; her limbs stretched unnaturally and her neck twisted away to the side. The desk itself was covered in a flurry of papers and every drawer had been pulled and left open. A mug of spilled coffee puddled
down one side of the desk. Written on the mug was the word Boss.

Rose fought panic as she moved in and surveyed the surreal scene before her. Principal Wendy Storme had not moved. The face on the twisted neck was frozen in an ugly grimace of terror—with mouth and eyes wider than normal. Her swollen jaws and neck had darkened to a macabre blue. A thin stream of drool crept down Wendy’s chin and her eyes stared unseeing at the wall beyond. Without notice, Wendy’s body flopped to the floor with a flaccid thud, virtually at Rose’s feet. 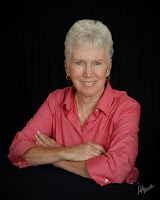 A career educator, Susan Coryell has taught students from 7th grade through college-level. She earned a BA degree in English from Carson-Newman College and a Masters from George Mason University. She is listed in several different volumes of Who’s Who in Education and Who’s Who in Teaching.  Coryell belongs to Author’s Guild, Virginia Writers, and Lake Writers. She loves to talk with budding writers at schools, writers’ conferences and workshops. Her young adult anti-bully novel EAGLEBAIT is in its third edition for print and e-book, updated with cyber-bullying. EAGLEBAIT won the NY Public Library's "Books for the Teen Age," and the International Reading Association's "Young Adult Choice."

A RED, RED ROSE, first in a cozy mystery/Southern Gothic series, was nominated for a literary award with the Library of Virginia. BENEATH THE STONES, the sequel, was released in April of 2015. NOBODY KNOWS, the final novel in the Overhome Trilogy was published October, 2016.
A MURDER OF PRINCIPLE is under contract with The Wild Rose Press and was released March 12, 2018

The author has long been interested in concerns about culture and society in the South, where hard-felt, long-held feelings battle with modern ideas.  The ghosts slipped in, to her surprise.
When not writing, Ms. Coryell enjoys boating, kayaking, golf and yoga. She and her husband, Ned, love to travel, especially when any of their seven grandchildren are involved.
Please visit Susan Coryell’s website: www.susancoryellauthor.com and her blog: www.susancoryellauthor.blogspot.com or contact her on Facebook and Twitter.

A Great Whodunit. What happens when a new principal single-handedly destroys the camaraderie, spirit, and good name of a high school and some of its staff? People want to kill her. (I’m lucky I never had a principal like her!)
Typical of most mysteries, the dead body shows up immediately. Then, Author Coryell does something different. She takes the reader back in time, so we can understand what led to such a drastic event. High schools employ many people. Consequently, many characters inhabit this story. Some are lightly described, but the main characters—Principal Wendy Storme, English teacher Rose Lane, and her intern Penny Bright are well-developed. The story is told through Rose and Penny’s points-of-view, and it’s done well.Step-by-step, Principal Storme wreaks havoc on people’s lives—demoting here, replacing there, even firing—giving everyone, not just in the high school but in the community as well, a motive to kill her. At first, I thought some of the things Storme did were illegal. But I’ve been out of the education world for over thirty years. I didn’t realize how much has changed, especially in a right-to-work state. It’s surprising what goes on behind closed doors in a high school. If you enjoy a good mystery, you’ll enjoy this book.