I'm excited to present another new book. Rather, it's the re-release of a book that was published five years ago. When the rights were returned, I couldn't wait to re-issue it. I love this story. 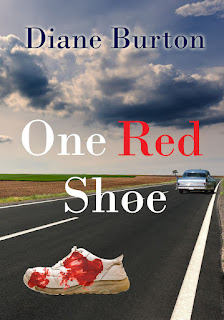 ONE RED SHOE began as a writing assignment at a Mid-Michigan RWA chapter meeting. Some writers hate writing on demand. I enjoy it. Give me a sentence or a clue and my imagination takes off. Through the late 1990's and early 2000s, I wrote and rewrote this story. My friends (like Nancy Gideon, Jolana Malkston, and the LaSenorita critique group) gave me lots to think about. They made me rethink motivation and goals. Nobody likes to have people tear apart their work. Biting my tongue and listening to their advice made this story so much better.

If you haven't read ONE RED SHOE, here's a little about it, followed by an excerpt. I hope you enjoy.

It Happened One Night meets Knight and Day

Sam Jozwiak slid open the door to Korioff’s inner sanctum. It had been blissfully easy. One guard, now sleeping quietly along with the rest of the compound. Locks a rookie could open. The computer password taped under the mouse pad. You’d think even a minor kingpin in the Russian Mafia would have better security.


Hold on. No modem. No cable, DSL, broadband, not even dial-up. No way to transmit data. Well, shit.
Okay, on to Plan B.
In the dark, with only the glow from the computer screen, Sam copied files onto a tiny memory chip. The financial records and client lists would make for fascinating reading back at headquarters. As the personal files were being copied, a name caught his attention. Why the hell did the Russian Mafia have a file on a U.S. senator? Especially, that senator. Sam opened the file. Holy shit!
Intel this dangerous couldn’t wait for the normal fourteen-hour transport home. The hearing was next week. What he just read would send shockwaves through Washington, through the country. He had to report this to the Director now then upload that file to the agency.
An hour later, he raced up the worn wooden stairs of the shabby hotel. He’d contacted the Director who wasn’t pleased about the change in plan. Sam had wasted too much time explaining why he couldn’t hook up a connection instead of copying the files. The Director insisted that the package be hand-delivered. While that seemed odd to Sam, considering the tight time frame, the Director did have a reason. The intel was too sensitive to trust to the Internet. He ordered Sam to meet him in New York City. Again, odd. But he learned long ago not to question his superiors. All he had to do now was grab his gear and get the hell out of Dodge before Korioff discovered the little surprise in his computer.
Sam unlocked the hotel room, realizing too late that it wasn’t locked.
“Hello, Samuel. Long time no see, as you Americans say.” Yuri Grashenko sat in the corner of the small room, his smile as deadly as the Walther PPK in his hand. “Please return what you stole from my employer. He is most unhappy.”
Jesus, how did he know? How did Grashenko get here so—
“Why you talk nice to thief?” The male voice came from behind.
Sam spun low with a move he hadn’t forgotten from his college basketball days. He slammed into the newcomer as a bullet from the PPK slammed into the wall where Sam’s shoulder had been seconds before. One good thing. Yuri wasn’t trying to kill him. Not yet, anyway.
Sam and the newcomer rolled down the dark stairs in a tangle of arms and legs. Jesus, the guy was big. Elbows and knees wreaked as much havoc as the wood steps. He was going to have bruises on bruises.
His dad was right. Sam should have gone to work in the steel mill. Shoveling slag had to be easier than this.