I'm happy to welcome back author Jenna Jaxon with her latest release, Time Enough to Love, a compilation of three stories. Is this a great cover or what? Jenna's here to share a little about the story. 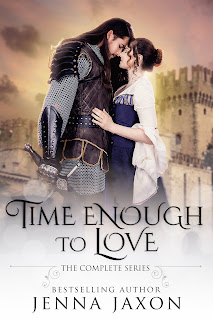 When I was writing my very first romance novel series, I started in an organized manner with a detailed story outline.  I still have that outline saved and it is amazing how different it is from the book that was finally written.  And those changes are all due to one character who decided he wanted to be a hero.

My story was about a knight, Sir Geoffrey Longford, who was betrothed to Lady Alyse de Courcy, whom he had never met. They are both courtiers in the service of Princess Joanna of England. Geoffrey falls in love with Alyse and therefore vows he will win her heart before they are married. Pretty straightforward.

Then my muse whispers, “You need more conflict.” So I create a best friend for Geoffrey, Thomas Knowlton, Lord Braeton, with whom the 17 year old heroine is infatuated.  Nice addition to the conflict. And Thomas is a fun, secondary character who will be part of the courtiers of the court, but not much more. He will only be in the first book.

Then, just after Betrothal (Book One) ends and Geoffrey is called home, I realize I need someone to bring Alyse a message from Geoffrey.  The next thing I know, Thomas is waving his hand and saying, “I’ll do it.” And in that moment, the entire rest of the outline was thrown out. Because I suddenly re-envisioned the whole novel as a love triangle brought about by the treachery and ambition of Geoffrey’s father. That became Betrayal (Book Two).

But now I had a big conflict of my own, because I had two heroes, Geoffrey and Thomas.  And Beleaguered (Book Three) is the story of who gets the girl and why and how.  It was incredibly difficult to write.  I had two very different but very likable heroes who both love the heroine and whom the heroine loves.  If that sounds familiar, it’s a common trope in romance.  The most popular one in recent memory has to be The Twilight Saga.

So I now have Team Geoffrey and Team Thomas.  And who the hell gets the girl?

Geoffrey is the big, brooding, bruiser of a knight, whose major character flaw is jealousy over Alyse’s attitude toward Thomas.  Thomas is suave, the playboy of the medieval world type, much more the wit, whose jealousy surfaces, but who manages to control it.  His major flaw is his jaded attitude toward everyone and everything.

This all made the book harder to write because while there is an HEA as there must be, it is not a ménage a trois.  So someone has to lose the girl.  Jacob did not get Bella.  And in Beleaguered, someone will get the girl and someone will not.  Who will it be?  Only time, and the book, will tell.

Diane here: what a conflict! I have got to read this book just to find out who gets the girl.

When Lady Alyse de Courcy is betrothed to Sir Geoffrey Longford, she has no choice but to make the best of a bad bargain. The hulking knight is far from her ideal man, and although he does possess some wit and charm, he is no match for the sinfully sensual man she secretly admires, Thomas, Earl of Braeton, her betrothed’s best friend.
From the first, Sir Geoffrey finds himself smitten by Lady Alyse, and, despite her infatuation with his friend, vows to win her love. When Geoffrey puts his mind to wooing Alyse, he is delighted to find her succumbing to his seduction. But when cruel circumstances separate them, Geoffrey must watch helplessly as Thomas steps in to protect Alyse—and falls in love with her himself.
As the three courtiers accompany Princess Joanna to her wedding in Spain, they run headlong into the Black Plague. With her world plunged into chaos, Alyse struggles with her feelings for both the men she loves. But which love will survive?

“Thomas.” Alyse curtsied quickly then blurted out the fear she had fought almost since Geoffrey had left. “Is my lord well? Have you news for me?”

Thanks to Anne and Margaret’s thoughtless comments, she had become convinced Geoffrey had fallen ill with Sir Robert’s ailment and now himself hovered between life and death.

Avoiding her eyes, he answered briefly. “Aye, my lady. When I left him, Geoffrey was well enough.”

While his words relieved her, a shadow still lay on her heart. If Geoffrey was not ill, why had Thomas’s manner changed? What had summoned this aloof stranger? He was withholding something from her.

He hesitated, searching her eyes then looking away. He fisted his hands. “Sir Roland is…has…”

Alyse could stand it no longer. She crossed to stand directly before him, laid a cold hand upon his arm, and gripped it. “Tell me.”

That there was something he could not bring himself to tell her filled her with terror. He said Geoffrey was well enough when he left. What about now?
Before she could question him further, he drew out a folded piece of parchment, sealed with blue wax and stamped with a signet ring bearing Geoffrey’s family crest. She stared at it, a cold dread creeping through her.

“Geoffrey bade me place this in your hand and no other, my lady.” Thomas thrust the missive toward her.

Alyse compelled herself to hold her hand out.

He sighed. “He also bade me be at your service, lady, had you need of anything.” He gave the parchment into her hand. As he did so, she looked into his eyes and recognized the same pity she had seen in Princess Joanna’s.
Panic made her arms weak and her fingers numb. She forced her shaking hands to break the seal. Alyse unfolded the letter and slowly read the scratched and blurry words.
* * * *
In her bedchamber, Princess Joanna waited with Maurya, Anne, and Margaret. The women’s faces had changed from puzzlement to fear. Joanna looked from one maid to another, trying to hide her despondency. So many prayers had not been answered today.

Anne finally summoned the courage to ask, “Your Highness, what has happened?” She choked back tears. “I meant no harm, earlier. Indeed,” she crossed herself, “I wish Sir Roland and Sir Geoffrey long life.” She turned stricken eyes toward Joanna and whispered, “Is Sir Geoffrey—”

A wrenching wail of anguish shattered the hushed room, as though the very walls echoed the sound. The four women stood rooted to the floor at the almost-inhuman shriek of grief.

The sound cut off abruptly, and in the eerie silence that followed, they heard the soft thud of a body hitting the floor.

Jenna Jaxon is a multi-published author of historical romance in all time periods because, she says, “passion is timeless.”  She has been reading and writing historical romance since she was a teenager.  A romantic herself, Jenna has always loved a dark side to the genre, a twist, suspense, a surprise.  She tries to incorporate all of these elements into her own stories. She’s a theatre director when she’s not writing and lives in Gloucester, Virginia with her family, including two very vocal cats and one silent one.

Jenna is a PAN member of Romance Writers of America as well as an active member of Chesapeake Romance Writers, her local chapter of RWA. She has four series currently available: The House of Pleasure, set in Georgian England, Handful of Hearts, set in Regency England, and Time Enough to Love, set in medieval England and France, and The Widows’ Club series, also set in Regency England and available from Kensington Publishing in both print and digital.
She currently writes to support her chocolate habit.