Guest: Diana Rubino Spotlight on FOR THE LOVE OF HAWTHORNE @DianaLRubino 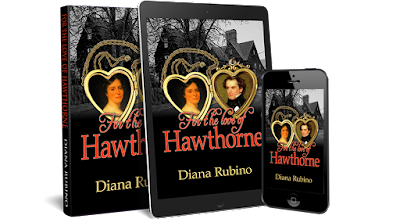 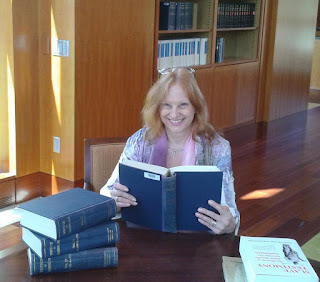 My passion for history and travel has taken me to every locale of my books and short stories, set in Medieval and Renaissance England, Paris, Egypt, the Mediterranean, colonial Virginia, New England, Washington D.C. and New York. My urban fantasy romance, FAKIN’ IT, won a Top Pick award from Romantic Times. I’m a member of Romance Writers of America, the Richard III Society and the Aaron Burr Association. My husband Chris and I own CostPro, an engineering firm based in Boston. In my spare time, I bicycle, golf, play my piano, devour books of any genre, and spend as much time as possible living the dream on my beloved Cape Cod.

About FOR THE LOVE OF HAWTHORNE

Salem, Massachusetts witnessed horrific and shameful events in 1692 that haunted the town for three centuries. Accused as witches, nineteen innocent people were hanged and one was pressed to death. Judge John Hathorne and Reverend Nicholas Noyes handed down the sentences. One victim, Sarah Good, cursed Noyes from the hanging tree: “If you take away my life, God will give you blood to drink!” She then set her eyes on Judge Hathorne. “I curse you and your acknowledged heirs for all time on this wicked earth!” Hathorne was not only Sarah Good’s merciless judge; he also fathered her son Peter and refused to acknowledge him.

In 1717, Nicholas Noyes choked on his own blood and died. Every generation after the judge continued to lose Hathorne land and money, prompting the rumor of a family curse. By the time his great great grandson Nathaniel was born, they faced poverty.

Ashamed of his ancestor, Nathaniel added the ‘w’ to his last name. His novels and stories explore his beliefs and fears of sin and evil, and he based many of his characters on overbearing Puritan rulers such as Judge Hathorne.

When Nathaniel first met Sophia Peabody, they experienced instantaneous mutual attraction. Sparks flew. He rose upon my eyes and soul a king among men by divine right, she wrote in her journal.

But to Sophia’s frustration, Nathaniel insisted they keep their romance secret for three years. He had his reasons, none of which made sense to Sophia. But knowing that he believed Sarah Good’s curse inflicted so much tragedy on his family over the centuries, she made it her mission to save him. Sarah was an ancestor of Sophia’s, making her and Nathaniel distant cousins—but she kept that to herself for the time being. 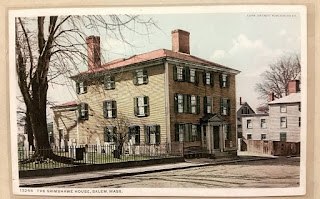 Sophia suffered severe headaches as a result of childhood mercury treatments. She underwent routine mesmerizing sessions, a popular cure for many ailments. Spirits sometimes came to her when mesmerized, and as a spiritualist and medium, she was able to contact and communicate with spirits. She knew if she could reach Sarah and persuade her to forgive Judge Hathorne, Nathaniel would be free of his lifelong burden.

Sarah Good’s son Peter had kept a journal the family passed down to the Peabodys. Sophia sensed his presence every time she turned the brittle pages and read his words. John Hathorne’s legitimate son John also kept a journal, now in the Hawthorne family’s possession. Living on opposite sides of Salem in 1692, Peter and John wrote in vivid detail about how the Salem trials tormented them throughout their lives.

Nathaniel finally agreed to announce their engagement, and married Sophia on July 9, 1842. They moved into their first home, The Old Manse in Concord, Massachusetts. Wanting nothing else but to spend the summer enjoying each other, we became Adam and Eve, alone in our Garden of Eden, Sophia wrote in her journal. 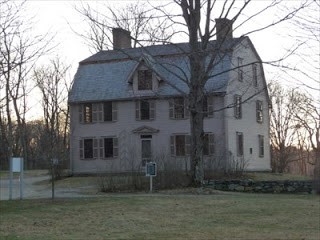 The Old Manse, the Hawthornes' first home as newlyweds

As success eluded Nathaniel, they lived on the verge of poverty. After being dismissed from his day job at the Salem Custom House, he wrote The Scarlet Letter, which finally gained him the recognition he deserved. But the curse he believed Sarah cast on his family still haunted him. In the book he asks for the curse to be lifted. 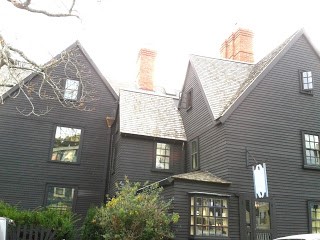 Sophia urged Nathaniel to write a novel about the house, knowing it would be cathartic for him. While they lived in Lenox, Nathaniel finished writing The House of the Seven Gables. The Gothic novel explored all his fears and trepidations about the curse. He told Sophia, “Writing it, and especially reading it aloud to you lifted a tremendous burden off my shoulders. I felt it physically leave me. I carried this inside me since my youth and couldn’t bring it out to face it. And I have you, and only you, to thank.”

But he did not believe the curse could be lifted.

Sophia invited renowned spiritualist John Spear to The Gables. She explained that she needed to complete one final step to convince Nathaniel the curse was lifted.

John Spear urged Nathaniel to forgive Judge Hathorne. “You don’t have to say it out loud,” John said. “Just forgive him in your heart.”

John, Nathaniel and Sophia went to Judge Hathorne’s gravesite to give the journals proper burial. 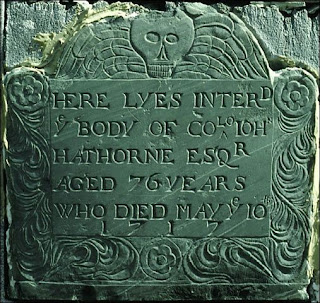 Why I wrote FOR THE LOVE OF HAWTHORNE

I live near Salem and have been to all the Hawthorne landmarks there, and in Concord. The House of the Seven Gables has been my favorite house in the world since I'm a kid. I've always felt a strong spiritual connection to Salem, and always wanted to write one of my books set there, including the witch trials.

I read several of his books and stories, to get a better background on him. Nathaniel wrote from the heart, about his true beliefs, and his loathing of how the witch victims were treated. He did consider it disgraceful, and it certainly was. He added the 'w' to his last name to distance himself from the judge. That tormented him and his family all his life. It must have been cathartic to him to have his writing as his outlet.
Visit Salem

I was fortunate to get a private tour of the House of the Seven Gables when I was writing the book; two of the guides, Ryan Conary and David Moffat, showed me around, and it was fabulous.
Click here to see their book about the house. 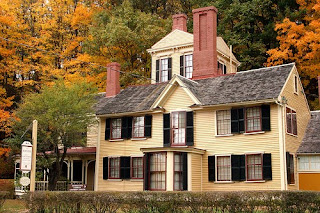 The Wayside, the only home the Hawthornes ever owned, in Concord, MA
Nathaniel added that room at the top for his writing studio

I went over to a curio cabinet and swept my eyes over the items on the shelves—a china doll wearing a calico dress, a stack of gold cups and saucers, a red and blue glass checkerboard propped up to display its surface…and a wooden hammer on the top shelf. Upon closer inspection, I saw it was a gavel that judges use in trials. Out of curiosity I picked it up and a shock ran through me as if electrified. Dear God, was it that gavel?
I dropped it to the rug. It landed with a thump. I bent to retrieve it. Somehow I knew it wouldn’t shock me this time—that was only an initial warning. “Something about it made me want to touch it, to pick it up and hold it.”
Nathaniel approached me. He stared at the gavel in my hand, horror darkening his eyes. His lips parted but no words emerged. I knew what he was thinking—the curse. He turned to his cousin, pointing at the gavel, his arm trembling.
Susan hurried over to us, took it from me and placed it back on the shelf. “Yes, it’s Judge Hathorne’s. What happened, Sophie? Are you all right?”
I looked down at my open hands, palms up. They burned as if I’d touched a hot poker. “That gavel—it carries something evil. Has anything happened to you with this, Susie?”
Nathaniel backed away and before Susan could answer me, he grasped her arm. “I begged you to get rid of that accursed thing! You know it shouldn’t be here!”
She looked from him to me, heaving a deep sigh. “I’m not inclined to dispose of it, Natty. It’s a family heirloom, notwithstanding its past.”
He gripped the chair, his face drained of color. “It’s downright evil. You know what he used that thing for.”
She held her hands up in surrender. “Very well, I’ll conceal it.” She took it off the shelf and slid it behind the checkerboard.
“That should not be in this house!” He stood his ground, his eyes fixed on the checkerboard as if it would melt in such close proximity to that horrid object.
“It’s fine there, Natty. It’s concealed from sight now.” She looked at me and gestured for me to sit again. I sat and gulped my sherry.
“Nathaniel’s always overcome with distress at the witch trials.” Susan explained what I already knew.
“And so should you be,” he cut in.
“If I must speak for Judge Hathorne, I heard stories of him from my grandfather.” Susan looked from Nathaniel to me. “The whole hysteria that caught up the judge was started by unscrupulous men to further their own riches. But spectral evidence was still admissible. No sane person could believe that blithery.”

Purchase FOR THE LOVE OF HAWTHORNE