Did you know that today is Star Wars Day? May the fourth. Think about it. 😊 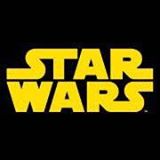 I've made it no secret that I love Star Wars. That first movie, A New Hope, led to my enthrallment with science fiction. I'm not crazy about highly technical stories that boggle my mind. Give me straight action. Add in a love story and I'm engaged.

Back in 1977, I read an article in Time Magazine about this new movie called Star Wars, with a full-page spread of images from the movie. I thought, okay, interesting but not for me. Then I heard the theme on the radio. Holy smoke! John Williams' rousing music made me get a babysitter and insist Hubs and I go to see Star Wars: A New Hope. I was hooked. We took the kids, they got Star Wars figures and starships for Christmas and birthdays.

When the second movie, The Empire Strikes Back, came out, I took our son and his best friend. Though we got to the theater early, it wasn't early enough because we had to sit in the first row. Oh, my aching neck. Didn't bother the boys, though. Later, Hubs and I took both our kids to see it.

Seeing our kids' enjoyment made every movie a must see.

After Return of the Jedi (1983), I thought that was it. The story arc completed. And I was happy with that. I was even happier when all three movies came out on video. Wow. We could watch them any time. Again and again. (I still have those VCR tapes, even though we don't have a player.)

In 1999, we got a big surprise. The prequel. Like so many Star Wars fans, we hit the theater. I can't say I'm enamored with the Episodes I - III (especially III, Revenge of the Sith), but they do add to the backstory. Again, I thought: end of story.

A new set of movies, beginning with The Force Awakens in 2015. And a plan for two more. To say I was thrilled is putting it mildly. Now, we had grandchildren to share our enjoyment with. (Never mind they had already become fans thanks to their parents.) Years ago, we bought the Star Wars Trivial Pursuit game. With the avid fans--son-in-law, daughter, granddaughter (13), and grandson (10)--we could play. The 10-year-old must have a steel-trap memory. You definitely want him on your team.

To tide us fans over in between the episodes, we were treated to two backstory films: Rogue One (my favorite) and Solo. I'll bet there will be more. There's a fan base that is sure to make each new film a success.

Last December had us at the theater once again for The Rise of Skywalker. The circle was complete. The series began with young Luke standing on a ridge looking ahead at the double moon on Tatooine. It ended with young Rey in the same spot. Perfect. Good had triumphed once again over evil.

Will the saga continue? If so, we'll be at the show enjoying one more episode.


May the Force be with you!