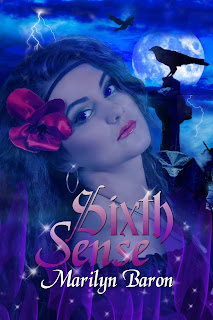 Reluctant psychic Katherine Crystal, dubbed "Crystal Ball Kate," is thrust into the national spotlight when she accurately predicts the death of a movie actor's young son in a private plane crash. Besieged by requests to use her powers to help others, she realizes why her parents had warned her never to let anyone know of her visions.

By-the-book Atlanta police detective Jack Hale harbors a deep-seated distrust of psychics and ignores Katherine's warnings when she calls to report her premonition. Jack is forced to partner with Kate, who uses her eerie sensitivity to evil to help him catch a serial killer in Sydney, Australia, but that's only the beginning of the story. Jack and Kate are drawn into the investigation of a mystery surrounding Kate's birth and find murder and romance among a secret society of psychics in the quaint seaside spiritualist community of Casa Spirito, Florida.

Buy Link:
Sixth Sense, a romantic suspense with paranormal elements, the first book in the Psychic Crystal Mystery series, published by The Wild Rose Press, is now available on Amazon in Kindle and paperback formats at:
http://amzn.com/B00ES5XUIM

Excerpt
“The plane is going to crash!” a woman shouted. “You need to do something.”

Jack jolted forward, ready for action. A plane crash! Then his police training kicked in. Stay calm in a disaster.

“Could I get your name, please?” He reached across the desk and picked up a pad of yellow sticky-notes.

“It's Katherine Crystal. But my name isn’t important. Vince Rivers and his son are on a plane, and it’s going down.”

This call was getting stranger by the minute.

“The movie star Vince Rivers? Are they on a commercial airliner?”

“It’s his private plane. Vince Rivers is the pilot.”

“When is this crash going to happen? And where?”

“I don’t know when it’s going to crash, but soon, and somewhere in Georgia.”

“Can you be more specific about the location?”
Dead silence.

Let me get this straight,” Jack stated. “You can't predict when or where this crash will happen?”

“How what works? Do you have inside information about this incident? Is the crash weather-related? Is it terrorism? On what facts are you basing this call?”

“I see.” Jack exhaled, rolled his shoulders, laid down his pen, and flexed his right hand.
Another lunatic. Predictable.

BIO
Marilyn Baron is a public relations consultant in Atlanta and a member of Romance Writers of America and Georgia Romance Writers (GRW) and winner of the GRW 2009 Chapter Service Award and writing awards in single title, suspense, and paranormal romance. A former GRW board member and past editor of the chapter’s online newsletter, The Galley, she handled Publicity for GRW’s 2013 Moonlight & Magnolias Conference. She writes in a variety of genres, from humorous women’s fiction to romantic suspense/thrillers, historicals and paranormal.
Born in Miami, Florida, Marilyn graduated from the University of Florida (UF) in Gainesville. She met her husband at UF and both of her daughters graduated from UF. Go Gators!
Marilyn says: What’s unique about my writing? I try to inject humor into everything I write. I like to laugh and my readers do too. I tend to feature older heroines, because, let’s face it, we’re not getting any younger.
To find out more about Marilyn’s books and short stories, please visit her Web site at: www.marilynbaron.com and her blog, Petit Fours and Hot Tamales at:  http://www.petitfoursandhottamales.com/
Marilyn and her sister, Florida artist Sharon Goldman just released a new musical called Memory Lane, at http://amzn.com/B00GBJWFIO. To listen to a medley of the songs, visit her Web site at http://www.marilynbaron.com/anthologies-and-more/.