One of my Mid-Michigan RWA chaptermates is here today--though how she made it through all the snow is a wonder.


As we get closer to the holidays, the frenzy starts to increase, and sometimes we get overwhelmed. There are decorations to put up, gifts to purchase or make, cards to address and send, and an endless list of "to dos". I remember, as a young working mom, counting the days until the season would be over and done. And that's really sad, because Christmas is supposed to be a time of happiness and joy. When something becomes work, the joy is gone and is no longer something to celebrate.
Sophie, one of the main characters in Christmas Wishes, has her hands full preparing for Christmas. In addition to her own preparations, she's been roped into directing the Christmas pageant at the church in which she and her sister grew up. Since she's never worked with groups of young children, this becomes a major challenge. Mitch is facing his first Christmas as a single father.
Difficult times are always easier to face when we have someone to share that burden. But finding the right person can also be a challenge! I had a wonderful time watching Sophie and Mitch sort through the problems they faced, both in their internally and externally. I hope you enjoy your visit with them, too!

Blurb:
Photographer Mitch Carson is tired of big city life. He just wants to settle down in a quiet town with his daughter, Angie. Even that doesn't quell his fear of losing his daughter to his scheming mother-in-law.
Sophie Gardner wants to be a screenwriter. She's ready to leave small town Zutphen, Michigan and go to Hollywood. With a theater degree under her belt, she's busy writing scripts while helping out her sister Joanie, who's bedridden with a difficult pregnancy. Unfortunately, Joanie has somehow coerced Sophie into directing the Christmas pageant at Zutphen Community Church.
When Sophie and Mitch meet, the attraction is instant and mutual. But each wants what the other is trying to get away from. Can they deny their feelings and pursue their dreams? Or will the holiday prove to them that their true wishes might not be what they'd thought?

Excerpt:
“First graders in the front row. Second graders in the second row. Third graders in the third row. The last one to sit down will have an extra job to do.”
Little bodies scrambled across the room, breaking up the neat rows Sophie had set up. The twin terrors, the sons of high school classmates Peggy DeSmit and Lyle Longton, knocked over several chairs in their quest to race to the second row. Unfortunately, some of the chairs they knocked over had people in them. The pandemonium ceased, replaced by the wails of the toppled children.
“Jordan and Joshua Longton, come here.” Sophie’s bark of authority surprised even her. The two boys came toward her, their hesitating steps showing their uncertainty. “You cannot run around pushing chairs over. You’ve hurt three people by doing that, and you owe them an apology. But first you will have to stand in the corner for five minutes. Each time you turn around or leave the corner I will add another minute to that time.” She pointed to her left. “Jordan, you stand in that corner. Turn your face to the wall and don’t move. Anyone caught looking at or talking to you will also be in trouble.” She pointed to the opposite corner. “Josh, you have that corner over there.” She hid her amazement when both boys followed directions.
She checked her watch. “Five minutes, and you will be able to join us, unless you move or talk.”

Buy links: Christmas Wishes can be purchased at Amazon, Barnes and Noble, and other ebook outlets. 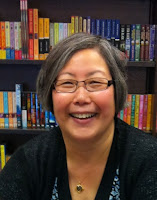 Bio:
In a previous life, Patricia Kiyono taught elementary school students by day and changed diapers at night. Now she teaches college students part time and changes diapers only when she's taking care of grandkids. She loves to do anything that doesn't involve exercise. Right now her favorite activities, other than writing, include scrapbooking, sewing, and making music. She and her husband live in southwest Michigan, near their five children and nine grandchildren.