ONLY IF YOU DARE by Margo Hoornstra 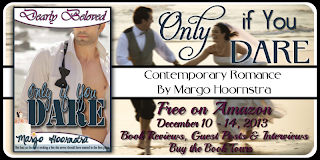 Thank you, Diane, for having me here today. I’m excited, because my latest book, Only If You Dare is free today and tomorrow on Amazon.
Only If You Dare is about two people who are each at turning points in their lives. According to the blurb, their story goes like this.
All the pleasures and none of the pain, that's what Cynthia Buckingham wants in a relationship these days. A one-night stand with Jonah Colt seems to fit that bill perfectly. Newly divorced, she's too busy planning her daughter's wedding for any serious involvement. Besides, her true passion is helping victims of PTSD reclaim their lives. Waking up after spending the night with a woman he barely knows, Jonah is stunned to realize sex for the sake of sex isn't enough for him anymore. A veteran of more military battles than he cares to count, he wants to forget it all and focus on peaceful civilian life. Except flashbacks won't allow it. Falling for Cynthia makes Jonah regret his weakened state, but he'd rather hide the truth than face it. When she sets aside everything she believes in to help him heal, can he accept her help--and her love?
This is the original proposal I sent to my editor for the book I thought I was going to write.
Big business versus the little guy.
She’s the widow of a mega-corp CEO with a distorted view of the big picture—we’re always right and they’re always wrong—who will stop at nothing to protect her late husband and, more importantly, her company’s reputations in the face of what she terms ‘a nuisance’ lawsuit. He’s the high powered attorney for the opposition, champion of the oppressed (pro bono, of course) with a distorted view of the big picture—we’re always right and they’re always wrong—who’s never lost a case and doesn’t plan to start now. Then the very person he’s representing goes off the deep end and takes an innocent woman, the widow, hostage.
As the situation escalates, both the hero and heroine have the concepts and beliefs they’ve always lived by turned upside down. His client betrays him by resorting to illegal measures and her company betrays her by refusing to negotiate for her safety.
Quite a difference, don’t you think? I may well write that hostage situation story someday. If I do, I have a great opening line. “This was the last place she expected to spend her birthday, face down in the lobby of her bank with a gun to the back of her head.”
But back to Only If You Dare. To be honest, I can’t tell you the exact moment the self-involved, high powered attorney became a serious and duty bound judge or when the socialite trophy wife became a down to earth psychologist. I also can’t put my finger on what prompted me to give Jonah Colt a background as a war veteran who is a more dedicated patriot. Although Cynthia is mugged and has her purse stolen in one scene, I never did develop the fully functional bad guy that was supposed to overpower her at gunpoint and hold her for ransom.
Each of these characters, Jonah Colt and Cynthia Buckingham developed into individuals who were totally different than I originally intended.
Maybe because, either way the story went, I knew they had to eventually come to care for and depend on each other. Like this scene, near the end of the book. After Jonah and Cynthia have parted company, they think, for good, fate has other ideas and puts them in the same, free falling elevator together.

An Excerpt from ONLY IF YOU DARE

“What’s going on?” Dropping the boxes she held, she spread her arms out behind her to hang on.

“I don’t know.” Pushing off, he was about to move toward her when the car pitched then jerked tossing him backward. Another downward bounce, this one lasting longer than the others, was followed by an ungodly screech then a heart stopping jolt.

“Whatever it was, the brakes seem to have held.” He turned to focus on the spot where she had been standing, then glanced down and dropped to his knees beside her prone form. “Are you okay?”

His hands came out to push on her shoulders as she began to sit up. “Don’t move yet.” He gave the order in the same voice he used when he came to the aid of wounded soldiers on the battlefield. “I need to make sure you’re all right first.”

Miraculously, she did as he asked without question.

“Did you hit your head?”

“I don’t think so. Yes.” Tentative fingers reached toward the back of it. “Ow! Definitely.”

As one hand maintained a secure hold on her upper arm, he brought his other behind her head to gently probe where her fingers remained. “You do have the start of a knot.” Capturing her hand, he pulled her fingers away. “Don’t poke at it. You’ll make it worse.”

“If you say so.” She sighed then closed her eyes as a grimace scrunched up her face.

His fingertips itched to stroke her cheek. Help clear the lines of stress from her forehead. “Be nice if we had an ice pack.”

Hang in there, soldier. We’ll have you patched up and on your way home in no time.

His breath whooshed out as he recalled the line he’d used way too often. Most times true to his word. A few times not.

A series of thumps and bumps erupted from behind Jonah. They both looked over as the doors were pried apart. “We have the car secure, folks. And we’ll try to get you out now.”

“Do you need help getting up?”

“Yes, please.” Shifting her feet underneath her, she extended her hands his way.

Sliding warm palms beneath surprisingly cool ones, he closed his fingers around her wrists for firmer support before he hauled her first to her feet and then, briefly, against him.

“How’s that bump doing? Any dizziness?”

He seized the opportunity—maybe unfairly—to cradle the back of her head in his palm and draw her closer. To his amazement, instead of going rigid and pushing away, she melted into him on a sigh.

Like that time on the battlefield when the sniper shot missed its mark, Jonah thanked God he’d been given a second chance.

As I mentioned, Only If You Dare is free today and tomorrow on Amazon. Please go to http://amzn.com/B00G8JAWPA for your copy. Then, if you’d like, tell me what you think. 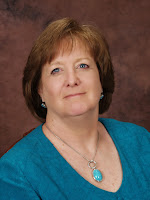 About Margo Hoornstra
Like many writers, it’s hard to determine exactly when my fiction writing career began. I remember composing a short story in grade school (I have no idea about what) which was chosen for publication in an all school anthology. A journalism class taken in junior high school led to a job on the school newspaper and a weekly column.
I always loved reading. I loved writing too. Someday, I thought, maybe when I grew up and received the right training, I could actually write a book. After all, I was often told, laughingly most times, I had an extremely vivid imagination.
Through the years, the desire to write was always there. I had so many ideas and characters roaming around in my head, so many stories. But the business of living—going to college, getting married then raising a family—took precedence over something as frivolous as writing a book.
Then one day out of the blue I was downsized—effective immediately—from a job I’d held for over thirty years. What seemed so unfair at the time, I now recognize the tremendous gift I was given that day. As I’m now able to spend more and more time doing what I love—writing romantic fiction—I find I really do have an abundance of stories to share.

Email ThisBlogThis!Share to TwitterShare to FacebookShare to Pinterest
Labels: Buy the Book Tours, Contemporary Romance, Margo Hoornstra, Only If You Dare, The Wild Rose Press