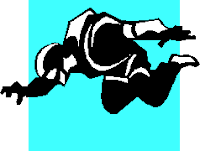 Yesterday, I watched a man jump out of a capsule attached to a balloon and free fall from over 127,000 feet (twenty-five miles) high. Not my usual television viewing fare. It was billed as a Mission to the Edge of Space. Felix Baumgartner made history by reaching higher in a manned balloon and falling faster than anyone ever had before. He fell so fast he broke the sound barrier (Mach 1). And survived.

Why would anyone risk his life doing something so dangerous? That’s the same question I asked this summer when Nik Wallenda walked a tightrope over Niagara Falls (yep, watched that one, too). Is it the same reason given for climbing a mountain—because it’s there? To break a record? Fame and glory? Science?

At first, I thought yesterday’s jump was another daredevil stunt. I was amazed at the preparations, the huge crew involved, the amount of television time dedicated to such a risky endeavor. Of course, announcers have to keep talking so there’s no dead air and give us statistics and describe the risks. How else can they keep viewers’ eyes glued to the TV for well over two and a half hours watching a balloon rise? Blame my glued eyes on Hubs. He happened across this event while watching “Mythbusters”. Need I say more?

Actually, there were scientific reasons for this dangerous stunt, the chief of which was whether anyone could survive bailing out at ultra-high altitudes. Another was whether spacesuits would protect the bailer. The space jump proved both and more. My brain, which appears to be hardwired into taking new info and seeking a practical application, immediately thought of astronauts bailing out right before breaking through the atmosphere.

All practicality aside, I kept thinking about the risk taker’s family, which the cameras turned to repeatedly during both the space jump and the tightrope walk. What was the mother/wife thinking as she watched the death-defying feat? Forget all the scientific rationale. Forget the glory and/or money. It must be the same feeling that spouses/parents experience watching their astronaut launch into space.

As a mother, I watched my babies grow, take their first tentative steps, protected them as best I could, but short of swathing them in bubble wrap there was nothing I could do to prevent them from hurting themselves as they fell. I bit my tongue and held my breath each time they dared to do something dangerous—climbing a slide, riding a bike, getting on the kindergarten bus, going off to college. In a mother’s heart, aren’t the early risks just as dangerous as a space jump?

In my concluding book of the Switched series, the hero’s mother reveals how she really felt about her son becoming an astronaut. Her fears, her anxieties. When asked why she never said anything before, she replies that she would never deny her son his dreams.

Is that how the space jumper’s mother felt when she first learned what he planned to do? Did she say don’t go? Or, like my hero’s mother, did she keep her fears in her heart? We protect our children as best we can—then give them wings to fly to their dreams.