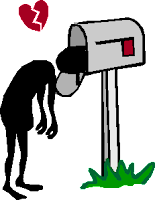 We all experience disappointment from time to time. A rejection letter from an editor, not getting the promotion we wanted, being turned down for a date, our favorite team losing the World Series.

How we deal with disappointment reveals our character. A rejection letter can do one of two things. It can galvanize us into sending our manuscript out again—“I’ll show that editor/agent”—or it can stop us in our tracks. How could someone say my baby is ugly? We can wallow in self-pity and dejection, determined not to get hurt again. That cute guy makes up a lame excuse not to go to the prom with us. (Hey, it’s a new world. Girls don’t sit around waiting. We can ask guys out.) So, what do we do? Sit home and mope or go with a friend and have a great time? When that job we wanted goes to someone else, we can double our efforts to make sure The Powers That Be recognize our worth or bad mouth the person (not nearly as talented as we are, of course) who got the position—or quietly look for a job with another company.

Then, there’s the Detroit Tigers. The euphoria I felt when they became the American League champions—sweeping the Yankees—started slipping when they lost the first game in San Francisco. Okay, I said, they’ll come back in the second game. My optimism waned with each loss, but I didn’t give up hope. They’ll do it in Detroit. Only they didn’t it. You know how guys yell at the television during football games? Well, that’s me during baseball. The groans, the moans—you’d think I was giving birth. I could blame the refs (only their bad calls sometimes helped my team). Blame it on the nasty weather. What happened to the high 70s while the Tigers were in Frisco? Besides, the wind carried one Tiger ball right into the stands for a homer. The play-by-play announcers certainly blasted the players enough. Blaming the manager or players doesn’t make me feel better. It makes me feel like a grump—which is why I didn’t write this post last night. I’m trying real hard to keep thinking “better luck next year”—it's not easy.

For the players, I can’t imagine how disappointed they must be. Notice, I didn’t say devastated. Devastated is when you lose your job or fire destroys your home. Devastated is what the people on the East Coast will be when Hurricane Sandy takes away everything they own, leaving unimaginable destruction in its wake.

There’s a lot of truth in the adage that which doesn’t kill us makes us stronger. Some days, don’t you want to say, hey, I’m strong enough? So, we writers will keep subjecting ourselves to rejection by sending out those manuscripts. Someone will eventually recognize our brilliance. <g> We will apply for positions in the hopes that we’ll land the right one. We won’t let one guy (who wasn’t good enough for us anyway) stop us from asking another to the prom. We’ll have high hopes for next year for our favorite team. Or, maybe, we’ll use our disappointment as fodder for blog posts.

How do you deal with disappointment?