Today, it's my pleasure to introduce you to author Anne Ashby who will "interview" Shal Gregory, the hero of her book Wilderness Liaison.

Welcome, Anne. I'm so glad you stopped by. Please tell us about yourself. 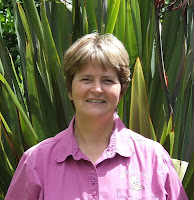 I grew up in the tiny township of Colac Bay, in New Zealand's most southern province, Southland. Books and my widowed mother's storytelling filled a huge part of our family life when I was young, mainly because it felt like we were the last family in New Zealand to get a television set. I guess I'm a chip of the ole block.

For years I was a closet romance reader. All through a very satisfying career with the Royal New Zealand Navy I dreamed of writing but never imagined those dreams might one day materialise.

Temporarily living in USA in 2000 I found the courage to attend a romance writing course - after all, no-one would know me there - instructed by multi-published Silhouette writer Loree Lough and my life changed forever. Not only did I throw open the 'romance' closet doors, but I wrote my first 100K story. I'd become a romance writer.

I'm so lucky my husband supports my writing ambitions. Both he and our four children are always ready to give me new ideas or supply the odd word or phrase that might be escaping me. Their help and encouragement is invaluable. Now, if only I could figure out how to convince them housework is great for the soul.

I have four books published with The Wild Rose Press with a fifth due out early 2013. New Zealand is normally the setting for my stories, if not my characters are New Zealanders.

Wilderness Liaison is a sensual contemporary romance published in print and digital format by The Wild Rose Press.

Back Blurb
The concrete jungle defines financier Shal Gregory. He thrives on the liveliness and sheer vitality of the fast paced business world. So how does he find himself alone in the thick of the New Zealand bush with a feisty guide who undoubtedly despises everything he stands for?
Jodie Mathieson’s devotion to the wilderness fulfills her. She isn’t prepared for an intimate liaison with a man who clearly does not share her love of the great outdoors. But the sparks between them ignite and soon scare Jodie into flight.
Bewildered but determined, Shal tracks Jodie down and resolutely embarks on a course to convince her that having some differing life goals isn’t enough to keep them apart.
But can Jodie ignore past experiences? Dare she believe him?

Excerpt
"Last night was a mistake," Jodie began, refusing to make eye contact as her waved arm encompassed the room behind them.
"A mistake?" Shal's voice had dropped. "It didn't feel like a mistake to me."
"Well it was, and it won't be happening again."
Although she tried, she couldn't shake off Shal's fingers as they grasped her chin and forced her to look at him.
"What?" he frowned, "I don't understand."
Jodie tried to look away from his confusion, but his hold on her chin tightened.
"Talk to me, damn it. What's wrong?"
You are, she wanted to scream at him. You're all wrong for me, nothing like the man I'd want in my life. But she swallowed the truth along with her panic and prayed her voice sounded calm. "Like I said, last night was a mistake. It shouldn't have happened."
He was silent for so long, Jodie wondered if he was ever going to reply. His dark eyes swept the vista in front of the cabin before returning to drill into hers.
"Your head might be telling you that," he murmured, "but you're body's saying something quite the opposite." Mesmerised she watched his eyes drop to her neck. "I can see your pulse beating, Jodie - it's racing--"
"Only cos I'm angry."
Shal's hands cupped her face and his fingers slid up through her hair. "You're not angry, Jodie," he whispered, his lips tantalisingly close. "You're aroused."
Unconsciously her dry lips opened, her tongue flicking across them. She felt an exhilarating sense of power when a groan escaped him as his mouth captured hers, demanding, and getting a response.
Shal clutched her shaking body. "Last night was fantastic. Don't spoil it by denying that."
Feeling herself falling deeper and deeper into a hole, Jodie somehow gained the strength to yank herself away from his touch.
And now Anne treats us to an exclusive interview with Shal Gregory:

Good morning Shal, thanks for joining me today. As you know we are compiling an article about using New Zealand’s wilderness as a way to build team spirit, particularly with city based businesses. Thanks for agreeing to participate. But first would you tell us a little about yourself. What do you do for a living?

And you’d rather be anywhere else but here with me now?

Then why consent to this interview?

My father felt it was worthwhile step and persuaded me to participate.

I understand it was your father’s idea for you to attend the Mathieson exercise? Do you always do what your father tells you to do?

(back stiffens and eyes narrow) My father has just recently retired as CEO due to ill health. He retains an interest in our company and suggested team building could enhance our productivity. I happened to agree with him.

Well thank you for that. I appreciate your valuable time

What was your response when your father suggested you should be included with the staff training?

I was against participating personally. My inclusion was to merely show the staff we were looking at this venture seriously.

You felt you needed no ‘team-building’ training? You don’t believe you’ve learnt anything from the experience?

(shifts in his seat and for a moment refuses to make eye contact) It may have been of some benefit to me personally.

You objected strongly when a woman was placed in charge of the tramp? Why? What happened to cause this attitude?

An incident in my youth.

Would you care to share a little detail? My readers might consider you a chauvinist if you don’t elaborate.

(with reluctance) My best friend drowned in a sailing exercise. He could have been saved if the adult in charge hadn’t lost her head.

Oh, that’s dreadful. At least now I understand why you objected so strongly when Jodie was brought in. Do you still harbour concerns about women in charge? How do you think Jodie coped in this instance?

Jodie is an exception. She was more than capable of dealing with each emergency as it arose.

I understand your feelings for Jodie gradually changed.

(a slight shift in position in his chair) Who wouldn’t be impressed with the way she responded to all of us, and to what the environment threw at us.

What made you volunteer to accompany Jodie to find the injured deer stalker? I understand there was tension between you at the time.

Jodie clearly could not go alone. It was obvious I was the one who should accompany her.

You weren’t concerned about the heated argument you’d just had?

A man’s life was at stake.

Yes, well, of course. You took almost two days to find that deer stalker. Did your relationship with Jodie develop during that time?

(leans forward and eyeballs interviewer with narrowed eyes) Look, we were moving through dense bush as quickly as we could. We barely stopped. Yes, my attitude toward her changed during those two days. Jodie Mathieson’s strength and determination blew me away. I have never met anyone like her. She has my highest regard.

By the time of the rescue and your arrival at that cabin, things had changed between you I believe?

(glaring) Jodie had hurt her back, she could hardly move. Of course things changed. She needed help and care.

You must have enjoyed the role of provider and protector after being in a subservient role up until then.

I never considered it subservient. Jodie was the expert in a field I knew little about. (left eyebrow rises) A good man manager knows how to utilise his staff to their full potential.

Did the unusual layout of the cabin affect you? I’m very interested in what happened at the cabin, what you did to fill…

Our time in the cabin has nothing to do with the team building exercise.

But I’m sure our readers would love to know how…

I am not talking about the cabin. (begins to rise) In fact I think this interview is over.

No, no no Shal. Please sit down. I understand. The cabin and what happened there is off limits.

(glare could freeze water at the equator)

So you consider the course was worthwhile for you personally?

After all, through it you did meet Jodie. Are you staying in touch? Have you seen her, spoken to her since your return to Auckland?

(fists clench white around the chair arms) I don’t know where she is. I can’t find her.

She left to visit her friend in hospital earlier than I expected.

So you don’t actually know where Jodie is? Are you intending to look for her, find her? It sounds to me she might not want to see you?

I’ll find her. She can tell me to my face she doesn’t want to see me. (mutters under his breath) instead of running off in the dead of night.

(interrupts) What do you mean seen Jodie since my return to Auckland? (jumps to his feet) Have you interviewed Jodie for this article too? Where is she? (grabs interviewer’s arm). Do you know where she is? Tell me? (fingers tighten)

Shal, please. Mr Gregory, let go of me! I think that’s quite enough information today. Thank you for your time.

Where is she? (stalks after retreating interviewer) If you think I’m going to let you go without telling me where she is…

Find the answers to these and many more questions in WILDERNESS LIAISON available at all major online book sellers.

Anne, thanks so much for stopping by and letting us listen in on that interesting interview. Shal sounds like quite a guy.