Stop #3 on The Pilot Launch Tour 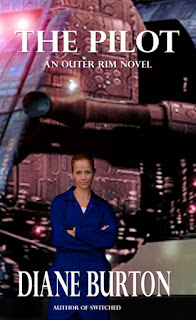 Read a new excerpt from The Pilot

Tuesday, Dec. 4: Why I Write Sci-Fi Rom at Anne Ashby's
(this actually starts Monday evening since she's in New Zealand)
December 4 - 9: Book Lovers Holiday Giveaway Hop
(enter for a chance to win a copy of The Pilot)
Wednesday, Dec. 5: Sidekicks, Buddies & BFFs at Star-Cross Romance
Friday, Dec. 7: Villains at He Said, She Said

Also, check out the  Book Lovers Holiday Giveaway Hop Enter to win a FREE copy of The Pilot.

Meantime, here's a little bit about The Pilot:


There’s no place like home . . . and he just confiscated hers.

Forced to use her starship as collateral to replace stolen cargo, pilot Celara d’Enfaden risks losing everything if she fails to deliver the goods. Her ship is the home she never had as a child.

Determined to bring order to the frontier, rule-bound official Trevarr Jovano refuses to tolerate those who disrespect the law. So when an indie pilot refuses to obey, he seizes her ship and cargo.

The only thing Celara cares about more than her ship is her brother. To rescue him from the clutches of a galactic gangster, she’ll even join forces with Trevarr who is bent on avenging his wife’s murder.

The Pilot is available at Amazon ~ Smashwords ~ Barnes & Noble