The Return of Nancy Jardine


I'm happy to welcome back my friend from Scotland, Nancy Jardine. In our online conversation about this post, Nancy & I discovered a mutual interest in genealogy. Where Hubs' and I are researching our ancestors, Nancy took her interest in a different direction--the family trees of her characters. So, please help me welcome back Nancy Jardine as she tell us . . .

My initial novel writing was definitely ‘pantser’ driven where one idea led to another and little was done in terms of early plotting and planning. That was definitely not the case for my most recent release -Topaz Eyes by Crooked Cat Publishing (Dec 2012). Hours were spent developing plans for it, to ensure the details would be believable, and the plot would have all the holes filled in.

From the outset I knew I wanted to create a complicated family (ancestral) tree and write a mystery around it. The unfolding of a genuine family tree can be full of highs and lows, especially when a complete lack of evidence means a particular member apparently vanishes into the mist. Not so good when doing real research - but potentially a great idea for a fictitious one? I got to thinking. Could I create some mystery members of the family in my novel Topaz Eyes? What could be the reason for unfamiliar family members being drawn together? I decided to make it a treasure hunt. Literally – a hunt for precious items!

But my quest would have to have some very nice surprises. Notes were made, and as I trawled the internet in search of ideas for fantastic jewellery, my fictitious family members were created.

It suited me to start with Geertje Hoogeveen, a woman who bore six children in the 1880s. That amount of children was quite small for the era, but it was perfect for me to whittle down the progeny to manageable numbers in the novel. I needed a family tree that had few contemporary surviving relatives; otherwise the names encountered by the reader would be far too numerous.

My original A3 size version was done in pencil and rubbed out many times during the working of the early drafts. It wasn’t nearly as fancy as this one but it did the trick! 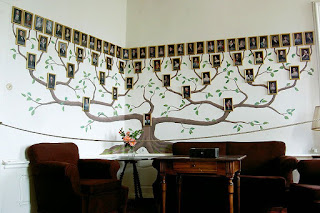 Working out the relationships of the third generation cousins who come together to work on the quest for Geertje’s jewellery collection was really exciting, if complicated. Fits and starts was the name of the game as the plot developed. Something tying in during earlier stages of the draft proved to be wrong for later developments, and a fair amount of tweaking had to be done. The intricacies of - who on my family tree was tied to what - was a problem that occupied me for many fascinating hours. At times my whoops and hollers perplexed my husband, but it was really exhilarating when something slotted in!

My family was born but where would they live?

Fitting in fantastic places I’ve personally visited is something I love doing in my writing. I’d already used some wonderful cities in my novel - Take Me Now- so Paris and Barcelona weren’t going to feature in Topaz Eyes. 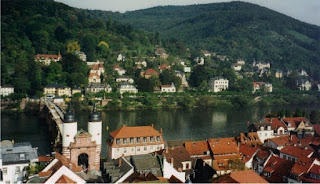 Heidelberg would be the initial location, followed by Vienna and Amsterdam – though other places would also be involved since my fictitious family were going to end up scattered around the world.

By the time those decisions were made my family tree for Topaz Eyes had taken great shape. The names I used took careful consideration since I wanted them to sound authentic. I used baby names sites on the internet to find German and Dutch names and eventually my family tree of Geertje Hoogeven looked like this. (N.B. a more polished one appears in the published novel!) The novel Topaz Eyes was born. 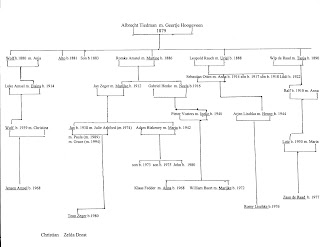 Thank you for allowing me to share my planning strategies, today, Diane! Best wishes to anyone out there who needs to do thorough planning for their next novel!

Has anyone done anything similar? I’d love to know if you have.

A peculiar invitation to Heidelberg embroils Keira Drummond in the search for a mysterious collection of extraordinary jewels once owned by a Mughal Emperor; a hoard that was last known to be in the possession of Amsterdam resident, Geertje Hoogeveen, in 1910.

Who among the progeny of Geertje – hitherto unfamiliar third cousins brought together for the quest – can Keira rely on? Distrust and suspicion among them is rife.

Which one is greedy, and determined enough, to hire thugs to tail her… and worse… as she travels to Vienna and Minnesota?  Can Keira even trust Teun Zeger - a Californian she is becoming very drawn to – as they pair up to unearth the jewellery?

As they follow a trail of clues, will they uncover the full collection before the hired gun kills them? Details remain furtive and undisclosed until danger and death forces their exposure. And who harbours the ultimate mystery item that is even more precious than the Mughal jewels?

Greed, suspicion and murder are balanced by growing family loyalty, trust, and love.

Excerpt:
“Would you ditch the mystery, Jensen, and just enlighten me as to what you think I have that interests you? And tell me why you couldn’t have asked for it in the letter you sent to me? I came here of my own free will – granted – but I’m not hanging around any longer if you’re going to drag this out, for I’m damned sure I’ve no idea what you’re referring to.”
Jensen’s reply lacked emotion, his face a blank screen, his gaze focused on Teun as Keira regarded the by-play.
“Teun. It may come as a surprise to you, but you actually know more about this invitation than Keira. At least you knew from my letter I had something of family interest you might be glad to take back to the USA with you. Keira had no such suggestion made to her.”
Tension rose in the room, which didn’t only radiate from Teun.
Keira sat uneasy, also unwilling to be in the dark any longer. “Would you please explain why you think I may have something you want, Herr Amsel?” She found herself reluctant to use his first name, considering the antagonism now mounting.
“All in good time, Keira. And please call me Jensen. I don’t set out to be anyone’s enemy. I believe each of you can provide access to items belonging to the collection. All the pieces are likely to vary in monetary value but, viewed as a complete entity, it will make an impressive display. It’s a historic set… and unique.”

An ex-primary teacher, Nancy Jardine, lives in the fabulous castle country of Aberdeenshire – Scotland. Her husband mans the kitchen, her offspring only an hour’s drive away. When time permits, ancestry research is an intermittent hobby. Neglecting her large garden in favour of writing, she now grows spectacularly giant thistles. Activity weekends with her extended family are prized since they give her great fodder for new writing.

A lover of history, it sneaks into most of her writing along with many of the fantastic world locations she has been fortunate to visit. Her published work to date has been two non fiction history related projects; two contemporary ancestral mysteries; one light-hearted contemporary romance mystery and a historical adventure.
Find Nancy at: http://nancyjardine.blogspot.com   http://nancyjardineauthor.weebly.com http://on.fb.me/XeQdkG
Twitter @nansjar

Amazon author page for all books and for viewing book trailers. http://amzn.to/RJZzZz

Nancy, this was fascinating. Thanks so much for sharing.