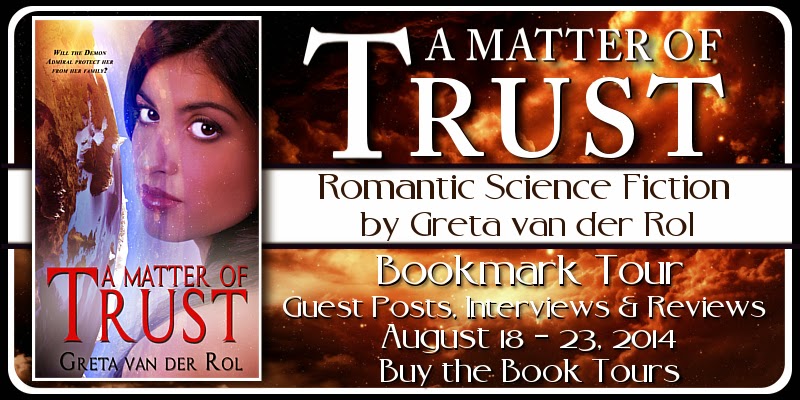 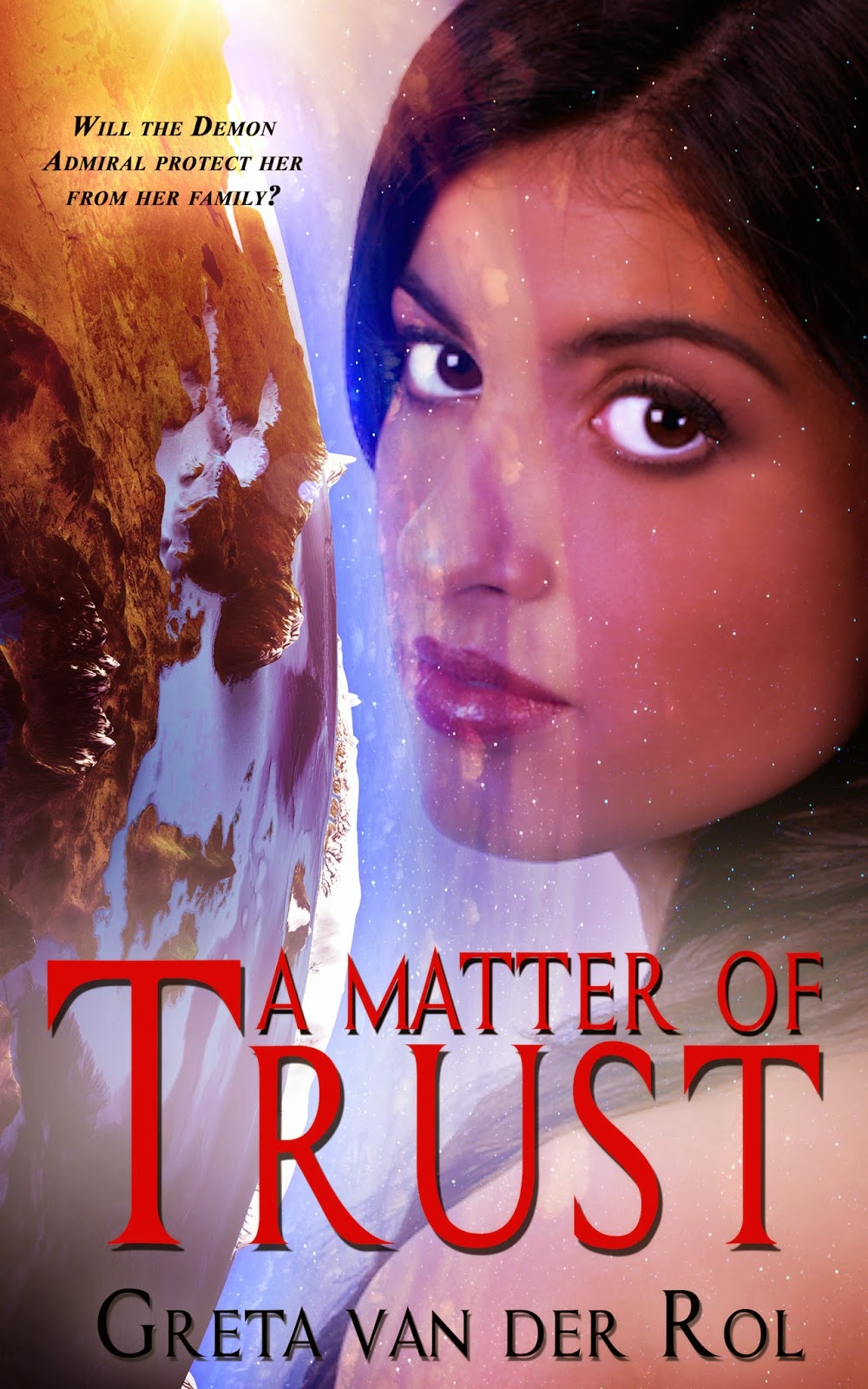 Will the Demon Admiral protect her from her family? Princess Amira is ready to start a new life after the death of her husband, but that doesn’t include marrying the man her father picks out for her. Pursued by his agents, she races across the galaxy in a desperate search for a safe haven. Amid simmering tensions at the edge of the Empire, Amira renews her acquaintance with Imperial Admiral Ul-Mellor. Although his detractors call him the Demon Admiral, Amira finds him intelligent, articulate, and very attractive.

But Ul-Mellor is not human and Amira is a princess – far above Ul-Mellor’s status on his home world. He and Amira will have to overcome a gulf of cultural and class differences if they’re to turn their mutual attraction into a relationship. And what will Ul-Mellor do when faced with a choice – Amira or his hard-won commission?

Amira strode across the ornate polished stone floor of her father’s private sitting room and into his study. “You wanted to see me, Father?”

Prince Fedor Hezkurin looked up from the paperwork on his desk and scowled, his gaze flicking over her. “Amira, my dear, I wish you wouldn’t wear those peasant clothes. They don’t become you.”

“They’re very practical for my work with the Tuchaska.” She pulled off the clasp that tied back her ponytail and shook her head, sending her hair dancing around her shoulders.

Hezkurin sighed. “That doesn’t become you either. You should not be wasting your time with aliens.”
Amira pulled over a chair and sat facing him. Yes, she probably did need a shower, and a change of clothes, too. Her boots had probably left a trail over her father’s floor. But she wasn’t going to apologize. “It was their planet before we took it over.”

“Yes, my dear and we’ve been the rulers for two hundred years.”

“They provide the labor for your estates. If somebody doesn’t help them you won’t have a labor force at all.” They’d had this discussion before. He didn’t care about mysterious illnesses that only affected the Tuchaska. As far as he was concerned there were enough of them to get the work done. Without her intervention their physician wouldn’t have been able to obtain sufficient drugs to treat the sick. Today she’d helped the doctor move two patients from their home to his clinic.

Her fingers beat a staccato tattoo on the arm of the chair. He was up to something. She could always tell. His eyes became shifty, darting around, and he fiddled with the objects on his desk. “Well?”

Prince Fedor shifted the picture of his wife one more time and took a deep breath. “I’ve been talking to Baron Ghaurondo.”

Ghaurondo? Big fat, ugly, loathsome Ghaurondo. She cocked an eyebrow. “How nice for you.”

“Only in the Arondean Hegemony.”

Her father frowned. “Which is ten systems and where we live.”

“Yes, fine.” Amira crossed her legs and folded her arms. Her heart beat a little faster. This wasn’t
sounding good. “So what?”

The Prince scratched absently at his neck above the ornate collar of his uniform. Goodness, that was a very bad sign. This wasn’t going to be good at all.

“As you know, we’ve not had the best of seasons. And we’re very dependent on the Arondean Hegemony… to buy our harvest, anyway. They’ve found other places to supply their agricultural products.” Fedor paused and licked his lips.

“What has that to do with me, father?”

“Baron Ghaurondo has always admired you.”

“Him and a few others.” Her pulse galloped. She had an idea she knew where this was going.

“He’s asked for your hand.”

“Sorry, I need both of mine.” She wished this was some sort of ridiculous joke. Or maybe she’d wake up in her own bed. “Father, you can’t be serious. He’s a bag of fat on legs. He’s got body odor.”

“He’s twice my age and disgusting. No.” Anger boiled in her belly. So he thought he could order her about like a teenager, did he? She should never have come back here. “And why do I have to marry again anyway?”

“Christoph’s been dead for a year now and you’re not getting any younger.”

“Don’t give me the grandchildren story. I don’t want to hear it.” She stared at him, a horrible thought insinuating itself into her mind. He couldn’t mean…? Surely not. But his face was composed, the sort of look her father gave his estate manager when he’d made up his mind. “Oh, how obscene. With that… that…”

“Look at it from the family’s point of view, darling. It’s a strategic alliance. In the short term, Baron Ghaurondo can guarantee sale of our harvest. Without that, we’re in for a very hard time.”

“So you’re selling me to keep your economy going.”

“No. In the longer term, we become part of a powerful family that will secure our future here. You would be mother of the future Baron.”

“He has promised your son will become—”

“So you’re selling me to gain political advantage. You disgust me.” At least he had the decency to squirm.

“No.” He scratched his neck again. “Look at the positives. Ghaurondo can give you anything you want. Jewels, clothes, finery, antiques.” He made an expansive gesture with his arm. “Anything at all.”

“He has nothing I want.”

The prince cleared his throat. “I’ve agreed, Amira. Baron Ghaurondo will be here tomorrow to collect his betrothed.”

Her heart lurched. Tomorrow. The bastard. “You didn’t think it might have been nice to discuss your plans for my life with me?” She jabbed her finger at her chest.

He leaned back in his chair, his fists on the desk, his gaze fixed on her face. “I knew what you’d say. But sometimes I have to think about more than just my immediate family’s interests.”

This was beyond acceptable. He might have sired her but contempt for him rose like bile in her throat. She rose to her feet and leaned over the desk at him. “You can’t do this. I’m thirty-six years old, not some naïve teenager to force into a strategic union.”

He flinched, but his jaw set. “I’ve given my word. It will be done.”

Amira shook her head slowly. “I’ve not given mine.” You contemptible bastard. She spun on her heel and strode toward the door, her boots ringing on the stone.

Her father’s sigh followed her. “I had hoped it would not come to this but you leave me no choice.”

The door opened. Six of the palace security guard waited outside.

Amira turned to her father, who stood behind his desk in his general’s pose: back straight and in command. He didn’t look at her, directing his attention at the armed men. “Escort Princess Amira to her apartments. She is not to leave without my express permission.”

Amira glowered at her father. Right now contempt wasn’t a good enough word. She despised him. “Do you think my mother would have approved of this?”

He looked at her then, a swift glance filled with sorrow before he said to the squad commander, “Take her away.”

“I despise you.” She marched off, flanked by the guards.

Greta van der Rol loves writing action-packed adventures with a side salad of romance. Most of her work is space opera, but she has written paranormal and historical fiction. She lives not far from the coast in Queensland, Australia and enjoys photography and cooking when she isn’t bent over the computer. She has a degree in history and a background in building information systems, both of which go a long way toward helping her in her writing endeavours.