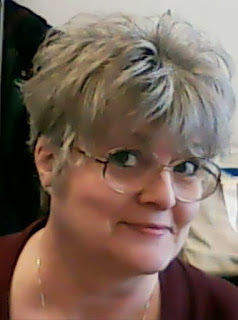 I'm so happy to introduce you to Diana Stout, a writer I've known for a long time. We belong to the same writers' group (the Mid-Michigan chapter of Romance Writers of America). Only recently I've gotten to know her better. She's an articulate speaker and a fun lunch partner.

Welcome, Diana. Here's where I get to grill (I mean, interview) you.


First, tell us about yourself.
Originally, I was a voracious reader and became a self-taught writer with various publications, which led to an online writing community and a local community college asking me to teach creative writing classes. That teaching and a divorce led me back to school relatively late in life so that I could earn a living teaching others how to write. As a result, I had to take a fifteen-year absence from my creative writing. I was doing a lot of writing—just not creatively. Because of my education, though, my writing strengthened and changed.
My earlier work experience covered many fields and those experiences added another layer of depth to my educational experiences; it made me an atypical student.
Today, I write fulltime. Even though at the beginning of that 15-year period I was working with several Hollywood producers who wanted to see anything and everything I was writing, I have no regrets for the choices I’ve made. It’s all been an amazing journey.
That journey includes two daughters and eight grandchildren. We all live in Michigan but in different communities. When I’m not writing or spending time with my family, I’m watching movies, reading, putting jigsaw puzzles together, or spending time with friends.
Where can readers find you?
Sharpened Pencils Productions is a company I formed in January this year and is the name of my main website, as well:  sharpenedpencilsproductions.com. All my blog links, my writing portfolios, and other information is located there.
My blogs are: Only for the Brave, where I talk about life as a writer; Behind the Scenes focuses on writing information and the process of writing whether it be screen, stage, or page; and Into the Core is where I talk about my paranormal experiences.
Other media:
Facebook author page: https://www.facebook.com/writerDianaStout
Twitter:  twitter.com/ScreenWryter13
Pinterest:  pinterest.com/drdianastout
Goodreads:  goodreads.com/user/show/43124185-diana-stout
Google Plus: plus.google.com/106078337055846499350/posts
Amazon Author Page: amazon.com/author/dstout
Instagram: instagram.com/wryterinwonderland/
Wattpad:  www.wattpad.com/user/ScreenWryter13

How long does it take you to write a book?
My first book took a year and a half. The second nine months; the third three months. My fourth book took me eight days. All of these were first drafts, and I was working part-time with the fourth book.
As you can see, I’ve taught myself how to become a fast writer and a marathon writer. Additionally, I’m a heavy outliner. For those first few books, I was a panster and all over the place. My first drafts now are far tighter and cleaner than those earlier first drafts used to be.
How many books have you written? Which is your favorite?
I’ve had three romances traditionally published, with all rights returned, so I’m in the process of republishing them. 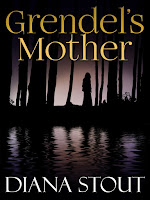 Grendel’s Mother, a recent, new publication, has been my favorite for a while, only because I was involved with it for ten years before finally deciding to self-publish. That decision was not made lightly and made only after several agents told me that I couldn’t write for YA and adults at the same time.
I do have to say, though, my favorite book is always the one I’m currently working on. Probably because it’s the one I’m spending the most time with.

Right now, I’m totally in love with a time-travel romance that I’m developing, along with the Laure Ridge novella series, with the first one, Shattered Dreams published on July 12. Also, I’m reviewing and revising screenplays I’ve written.
What do you think makes a good story?
For me, a good story entails characters who I can hook into or understand quickly. A good story has sparkling dialogue and action that reads fast, and if I can laugh somewhere along the line, all the better. Also, I need an engaging plot, one that surprises me.
As a writer, I’m a jaded reader because of my knowledge of story construction, so the author who can completely surprise me or pull my emotional heartstrings of love or terror will have me as a new fan.
Where do you start when writing? Research, plotting, outline, or...?
I always start with a title. I’m not sure when that practice started, but once I have the title, I can see characters, conflict, and resolution.
What are some jobs you've done that would end up in a book?
So many jobs, so many fields. I’ve worked in insurance, advertising, sales, manufacturing, as a bookkeeper and accountant, office manager, office supervisor, academics both administratively and as a teacher, as a tutor and tutor liaison, substitute school bus driver, raised calves and took them to market, learned how to put up food, and sewed my own clothes.
If I was a first time reader of your books, which one would you recommend I start with and why?
If you like independent characters who fight against all odds, I’d recommend that you start with Grendel’s Mother. Even though the main character is only 15, she struggles against odds in the 6th century, which includes giving birth and raising a child entirely on her own in the wilderness.

If you like a hot romance that includes external danger—which comes from some poachers who aren’t afraid to kill—then, I’d suggest Determined Hearts. 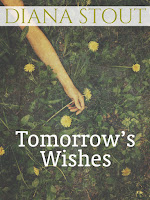 If you like a sweeter romance with sexual tension or awareness, then I’d suggest Tomorrow’s Wishes or New Beginnings. These books will be available before the end of the year, hopefully before summer’s end.
If you like just a short, fun romance, then I’d suggest any of the stories from my Laurel Ridge novella series. The first one, Shattered Dreams came out on July 12 and is available only as an eBook on Amazon. To learn more about the series, visit my portfolio on my Sharpened Pencils Productions website. The other six novella will follow soon.
Why did you choose to self-publish? Is it because your works cross genres?
Apparently, according to agents, Grendel’s Mother doesn’t fit neatly into one category. I was told that no book can be written for both young adults and adults at the same time; yet, that’s exactly what I did. I’ve been told, too, that I needed to pick one genre to write for, but I enjoy writing in different genres. Doing so keeps my writing fresh. Plus, I would be bored if I was stuck in one genre. I hope my readers will enjoy the variety, as well.
What do you hope readers take with them after reading your work?
My hope is that the story resonates, that they find themselves thinking about the plot, the situation, or the characters long after they’ve read my work. That they’ve enjoyed the reading so much that they tell their friends.
If you’re interested in receiving updates about my publications, subscribe to my What’s New! blog. 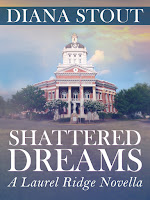 BLURB
Laurel Ridge novella series - Seven stories with seven couples. Each couple with their own story, told against the backdrop of a small southern community of Laurel Ridge, Georgia.
SHATTERED DREAMS  -  Mason Baylock has returned to his hometown as a newly appointed judge. He's hoping to reconnect with his high school sweetheart, Shelley Willis, but she's not interested. To keep him foremost in her mind, he frequents the diner, located across from the courthouse and where Shelley works, on a regular basis. Once a week for the more than the past three months, he's been asking her out.  And, once a week for more than the past three months, she's been turning him down.

Then one evening, they become locked up in the kitchen's cooler by accident. That's when there's no more escaping—the real conversation begins—and where the heat gets turned on. She can't deny she isn't attracted to him, but she's not about to date someone who shattered her dreams years ago, either. And then, she discovers that there is more to the earth-shattering consequences than even she imagined, which threatens to fracture and splinter life as they know it.

Will both of their dreams be shattered forever? Or does enough of a spark remain that they can rekindle the love they once shared?

EXCERPT
Mason snagged her arm, turning her around. “Even after all these years I still know you. I know that set of your jaw. We're not going anywhere. This conversation is going to get finished here and now. I've been dancing around you for half a year. My endurance isn't limitless, Shelley.” Not once had he raised his voice. He appeared calm while her insides were rolling and roiling, like waves on the lake during rough, stormy weather. And all the while, his gaze caressed her, as if he was looking for a way in so that he could help her help him.
It wounded her to see him so anguished. She had no choice. She had to tell him and what she was about to tell him would devastate him. She was too far in to back out now, nor would Mason let her.
“Apparently, your father didn't want you to know.”
“Know what? Shelley, tell me. You're driving me crazy! What didn't my father want me to know?”
“About our baby.”
His face paled. “Our what?”
“That last time we spent up here...”
“Spring vacation of our senior year. I remember.”
She paused, willing her voice to stay steady. “I got pregnant.”
Mason started to say something, then clamped his jaw shut. For several minutes the only sounds were those of squirrels chattering to each other in the treetops as they chased each other. How could they be so carefree and playing happily while she stood here feeling cold and miserable?
“There's more, isn't there?” he asked.
She nodded.