I'm so happy to introduce you to my friend and Michigander author Elizabeth Meyette. She is a charming lady, always willing to help fellow writers. Without further ado, let's get to know her. 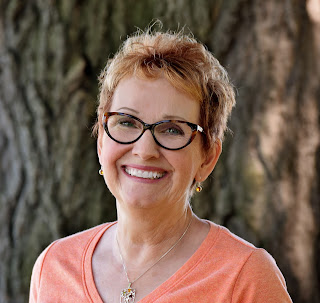 Thanks for inviting me to visit with you today, Diane.

Tell us about yourself.

I would love to regale you with tales of my mysterious life in exotic places, but my life has been pretty ordinary. Perhaps that is why my imagination fires with lives of danger and romance—although I do have a wonderful romance in real life with my husband, Rich. Last year, we moved to west Michigan to be near our kids, and near an airport that will transport us to our daughter and grandkids in Texas. We love the beauty of summers in Michigan, but like to get away from the winters for a couple weeks come February. I taught secondary English and journalism with a stint as a media specialist in elementary and middle school. I left my teaching career a few years early to pursue writing full time, and thus, my books were born.

I am a serious chocoholic and must have at least one Dove dark chocolate a day or I get grumpy. I also get grumpy when I’m not writing, and Rich has sent me to my office to write (and cheer up) more than once. He is my biggest supporter. We love to travel and have visited several countries in Europe and have cruised the Caribbean. I love to swim, like to hike, and attempt to golf. And read. I love to read.

Readers can find me at:

Wow. That varies from book to book. My first historical romance, LOVE’S DESTINY, took thirty years from inception to publication because I was teaching and didn’t have time to polish it. Its sequel, LOVE’S COURAGE, probably took only six months to write, I’m sure, in part, because the characters and setting were already established. My mystery, THE CAVANAUGH HOUSE, took about a year. My upcoming book, BURIED SECRETS has been a difficult labor, having taken two years. I am nearing delivery. (breathe, breathe)

My ideal work schedule is to go straight from the breakfast table to my office. I set a timer for 30 minutes so I remember to get up and move around. (If the words are really flowing, sometimes I ignore it.) I like to do yoga and meditate in the morning during one of those breaks. After a little break—back to work. This goes on throughout the day. When I’m drafting a new book, I could work for hours and it would seem like minutes had passed.

I get ideas from so many places! Recently, I was at a concert, and a new artist, Brennin, was performing one of his songs. Through his lyrics, I got a clear image of a scene to include in EXPOSED, a contemporary romance I’ve been working on. I whipped out my iPhone and started taking notes furiously. Rich thought I was texting LOL.

My idea for THE CAVANAUGH HOUSE came to me unbidden as I was driving through an extremely busy city. Fortunately, I remembered all the images that sparked the story idea and was able to write them out later. LOVE’S DESTINY was conceived after a dare. A friend kept insisting I read romances she enjoyed, but I kept saying romance wasn’t my genre. When I finally gave in and read several Kathleen Woodiwiss novels, I had to admit to myself that I enjoyed them…but not to my friend—I didn’t want her to “win.”! So I said, “These were good, but I could probably write a romance.” She said, “Then do it!” I said, “Okay, I will.” Gulp. So I did, and thirty years later it was published LOL

My fourth book is BURIED SECRETS and will be available in September 2016. It’s the sequel to THE CAVANAUGH HOUSE. I know you’re not supposed to have a favorite child, but I have to admit THE CAVANAUGH HOUSE is my favorite—so far.

I am currently working on LOVE’S COURAGE, the third book in the LOVE’S DESTINY series. Long before AMC produced the series TuRN, I had planned a historical romance based on George Washington’s citizen spy network. I just wasn’t fast enough LOL.

I am a “pantser” so I start with an idea and begin to write. The story unfolds through the lives and interaction of my characters. I research as I go along, usually using only one-tenth of what I research in my book, but knowing I have a solid knowledge basis for the time in which my book takes place. I have tried to outline, but my brain doesn’t work that way because often I don’t see where things are going. It’s like looking up a dark staircase, you can see the bottom steps, but what lurks at the top? I have to climb those steps and discover as I write.

Once I’ve begun the story, I will use Blake Snyder’s Beat Sheet from SAVE THE CAT to ensure my story has a direction and focus. That’s about as structured as I get. During the editing process, I may transpose scenes to tighten the plot or make more sense. As I told my students, writing is a recursive process.

I have to acknowledge my muse, Boris, here. I often feel like a court reporter simply typing out what I see and hear. I read my writing from the previous day aloud before I continue writing, and sometimes as I’m reading, I think, I don’t remember writing that. It truly is a transcendent experience for me.

How do I balance writing and life? Not easily. As I said, I get grumpy when I’m not writing, so if “life” requires a break from writing, I have to make a conscious effort to put aside my desire to write and deal with whatever life is handing out at the moment. It’s like taking off one hat and putting on another—a paradigm shift to what I need to focus on at the moment. 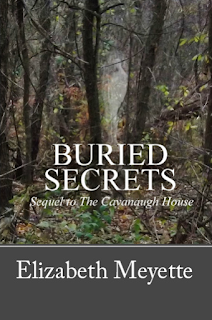 BURIED SECRETS is the sequel to THE CAVANAUGH HOUSE, so it is a paranormal mystery set in the Finger Lakes region of upstate New York. Jesse is a “ghost empath,” and again, a ghost helps her solve the mystery, putting it in the paranormal realm. The romance between Jesse Graham and Joe Riley that began in THE CAVANAUGH HOUSE continues in the sequel, but with a little competition for Joe. Because Jesse and Joe are separated for part of the book, my editor says it’s more women’s fiction and less romance than THE CAVANAUGH HOUSE. I love the combination of mystery and romance.

When Jesse Graham almost runs over a “body” in the road one night, she is plunged into a labyrinth of secrets, lies and murder. All Jesse wants is a simple life teaching at St. Bart’s… and a chance at love with Joe Riley. She realizes that plan has been thwarted when puzzling occurrences at St. Bartholomew Academy for Girls get increasingly dangerous. The danger doesn’t just spring from the ghost who haunts the grounds of St. Bart’s, but from a sinister presence that is not ghostly at all. As she digs into the mystery, threats on her life and the life of her student escalate.

Also in danger is her blossoming romance with Joe, owner of the construction company providing upgrades at the school. Jesse’s discovery that she is heir to the Wyndham fortune complicates their relationship. Joe’s resistance to involvement with the Wyndham family, founders of St. Bart’s, threatens to push Jesse into the arms of Scott Stanton, the new equestrian coach.

Which danger threatens her life the most? The ghost haunting her student or the secrets buried in the school?

Elizabeth’s book are available at:

Walmart (THE CAVANAUGH HOUSE print only)

Thanks so much for inviting me to your blog today, Diane. I’ve had a delightful time visiting with you and your readers.