At a party one night, I overheard a friend use the term “between nowhere and lost,” and with a writer’s brain, thought, Wow. What a cool title for a book. Of course, a title is a long way from a story, but every author will tell you each story we write sprouts from a different seed.

The seed planted, I needed a little fertilizer, so I started researching careers for my hero. Whether just dumb luck or some twist of fate, I stumbled across a Supreme Court brief on Darlington Manufacturing Company in South Carolina. In 1956, by a very slim margin, the plant employees voted to bring in the TWUA (Textile Workers Union of America). In retaliation, the mill’s owner shut down the plant.

At least three leaves sprang from the seed that day, and I was on my way. I usually write without an outline, and frequently without a plot, but as I became immersed in my tale, I realized I wanted some historical accuracy to give the book some grit. So I hopped in my car and drove to South Carolina. At the Darlington County Historical Commission, I hit paydirt. With a banker’s box full of newspaper articles dating back to the 1890s, I found more information about the case than I ever dreamed possible.  The legal battle between the Union and Deering-Milliken (owner of the plant) spanned 24 years—the longest running labor case in history. I have since returned to Darlington at least five times, and while Between Nowhere and Lost is fiction, I pulled many of the facts from the case to give the story some authenticity. The true story of Darlington broke my heart, and I have tried to bring some of that feeling to my story: 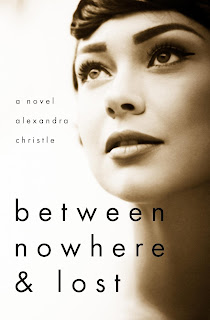 1960s housewife Helen Hodges has reconciled herself to a quiet, childless life in a small South Carolina mill town, but when she has a happenstance encounter with David Drummond, the mill owner’s son, her repressed longings for a child are reawakened and discontent floods over her. David is immediately taken with Helen, but tries, without success, to focus on his problems at the mill and the union takeover looming over his plant.

As the union fight becomes heated, racial tensions emerge and the town is polarized; violence breaks out and the situation intensifies, putting David in danger. Helen’s husband, the union representative, becomes David’s unlikely guardian, and although on opposite sides of the issue, the two men become friends. And as Helen is torn between her duty to her husband and her desire to be with David, as well as reconciling herself with her Catholic faith, events escalate until she learns some life-changing news and rushes to tell David before he leaves town, and her life…forever.

The Historical Commission will be erecting a historical marker for the mill (which has since been demolished) sometime this fall. The director has kindly invited me to that event, and I’m excited to attend. This town and its story has become a part of me.
More information about Darlington is on my website: alexandrachristle.com

Born in New York City, Alexandra was transplanted to a small town in South Carolina at the age of 11, after the death of her father. Embracing the south took some adjustments for a Yankee child, but now a resident of Norfolk, Virginia, she loves and claims the south as her home.

With a degree from the University of Missouri Journalism School, her career has spanned newspaper advertising, teaching high school English, and working as a graphic designer for a commercial print shop. But writing fiction is her passion -- she started her first "novel" at age 7 and made it through two chapters before abandoning it for Barbie and Ken. And when most young girls dreamed of being Miss America, Alexandra's dream was to appear on The Tonight Show with Johnny Carson, talking about her latest novel.