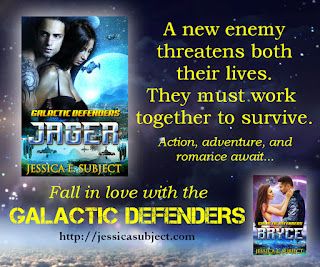 Please welcome back my friend Jessica Subject. Jess and I met online through a writers' support group called Authors Helping Authors (AHA). We bonded over our mutual love of science fiction romance and the Stratford Festival, near London, Ontario, Canada. Hubs and I went each summer to see fantastic plays and musicals. Although we haven't been since we moved farther away, we plan to return soon.

Jessica has a new book, second in the Galactic Defenders series. I just finished the first book, Bryce, and now I'm ready to read the second, Jager. Jess has been featuring snippets from Jager on Weekend Writing Warriors. I was intrigued from the start. Here's more about . . . 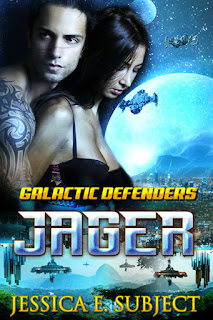 Jager's new squad of Defenders has completed training, but the spoiled princess who has grated on his nerves since her first day of training is called back to Hemera for a yearly celebration. When Princess Katrina doesn't show up, Jager must find her and drag her home, where he wishes she would stay.

Katrina is a Defender, not a princess. And there is no way she wants to return to a planet she hates for some stupid ceremony. Not when she could be out killing Erebus with her squad.

But when a new enemy threatens both their lives, they must work together to survive.

Jager squeezed his eyes shut, his head pounding. He gasped when the body attached to the head resting on his arm moved. The person rolled toward him, and a thin arm draped across his chest. But that wasn’t the only part of the being he felt pressed against him. Cosmos, had he drunk too much redip in the Defender lounge? That would explain the headache and why there was a naked woman beside him.

Katrina. The memories flooded his mind. They were locked up together, naked. And the lights had gone out. She’d screamed, and when he’d crossed the prison cell to get to her, something had knocked him away and beat on him until they’d finished torturing his squad member.

After he’d finally reached her, he’d pulled Katrina to the middle of the cell. It would be harder to reach them there. If she was in his arms, he could protect her from those who’d decided to lock them up. But he still didn’t know who they were, what they wanted, and what they’d done to the Erebus.

Katrina clung to him, one leg draped over his thigh. When she started to shiver, he held her tight. They only had two blankets, one separating them from the floor, and another over them. Very little to keep them warm aside from their own body heat. Not a problem for him, at least not until that moment when his body forgot she had a boyfriend, and wanted her for itself.

He had considered pursuing his junior squad member, especially after she’d arrived at the door wearing nothing but her undergarments the day they met. But, she’d grown close to Jace instead, and now spent most of her time with the leader of Zulu squad. So much time, she might as well train with them. But then, he wouldn’t have her in his arms as he did now. Even if it wouldn’t last, he had this moment.

ABOUT THE AUTHOR:
Jessica E. Subject is the author of science fiction romance, mostly alien romances, ranging from sweet to super hot. Sometimes she dabbles in paranormal and contemporary as well, bringing to life a wide variety of characters. In her stories, you can not only meet a sexy alien or two, but also clones and androids. You may be transported to a dystopian world where rebels are fighting to live and love, or to another planet for a romantic rendezvous.
When Jessica is not reading, writing, or doing dreaded housework, she likes to go to fitness class and walk her Great Pyrenees/Retriever her family adopted from the local animal shelter.

Bryce, the first book in the Galactic Defenders series, is 99¢ until April 19.