Why Cara Bristol Writes About Aliens

Why I Write About Aliens

Once word got out about Alien Mate, I was asked why I chose to write about aliens. I hope readers realize that I’ve been writing about aliens all along. The Breeder trilogy has alien main characters, and even though cyborgs are the leading men of the Cy-Ops Sci-fi Romance series, there are alien secondary characters, villains, and even two alien heroines.

Romance in all its subgenres offers readers escape and vicarious wish fulfilment. All heroes are handsome, powerful, funny, sexy, rich, and in sci-fi romance (as well as fantasy and paranormal), the male leads can be all of that and more.  They can have special powers or superhuman abilities. For an author, writing about aliens offers flexibility in story and character development. Aliens can be whatever you want them to be.

With villains and/or secondary characters in particular, an author has tremendous creative freedom because they don’t have to be humanoid. In the Breeder series, I created an alien whose skin exuded a caustic substance that burned on contact. In the Cy-Ops Sci-fi Romance cyborg series, I introduced the reading world to the Arcanians, the pickpockets of the future who have six eyes and “sticky fingers.”

The heroes and heroines of sci-fi romance still need to be humanoid to appeal to human readers, but an author can still have fun and create interesting characters with unusual traits, habits, customs, and abilities. Alien Mate is a “mail order bride” romance in which Earth exiles its female felons and sentences them to become the mates of aliens. The men are tall, dark, handsome, muscular, strong—and horned. There’s a scene in the book where the heroine finds out about the horns. “Dakonians” have never seen blue-eyed blondes, so when they see the heroine for the first time, they think she’s very alien looking and “unnatural.”

Writing about aliens also makes me look at my own world in a more questioning way. What is normal? What things do I take for granted? How would my Earth culture be viewed by someone not of this world? 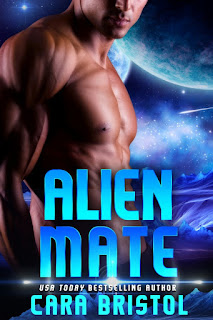 An excerpt from Alien Mate
“Any idea what the aliens look like?” I’d kept to myself, but I’d heard rumors our intended “mates” were scaly blue with long tails. Only recently had Terra One World made contact with Dakon. I’d been told the aliens “looked like us,” but I had little confidence in my government to tell the truth.

“I did a little ’net research before they transported me to the shuttle,” Andrea explained. “They are humanoid, genetically compatible with us, but they’re taller, much more muscular, and bigger.” She held her hands about a meter apart.

“Are you talking about their penises or their bodies in general?” Tessa asked.

Shit, I hoped Andrea was referring to their bodies. I eyed the span between her palms.

Andrea rolled her eyes. “Their bodies in general. I did not research their junk.”

Andrea placed her index fingers to her forehead so they stuck up. “And they have—”

“So we’re the court-ordered brides of horned aliens who may or may not have big dicks,” I said.

“That’s the size of it.” Andrea snickered.

I got up and moved to the observation window. Without the filtering effects of a planetary atmosphere, stars in space didn’t twinkle. They appeared as solid points of light. We’d traveled far enough none of the constellations were familiar anymore.

“Dakon must be very far away.” We’d been on the ship for two months with thirty days left to go.
“It’s hyper speed compared to the three-year round trip the first contact took. Thanks to the illuvian ore, we’ll do it in three months,” Andrea said. “The Dakonians have been waiting a long time for their mates. After the first contact ship returned to Earth, it took a year to set up the program and recruit the first group of women.”

Alien Mate blurb
Falsely convicted of murder, I'm sentenced to life as a mail-order bride to an alien.
I'm Starr Elizabeth Connor. Earth's government falsely convicted me of a crime, packed me on a ship with other female felons, and sent us to Dakon, a primitive, frozen wasteland of a planet. Why? Earth needs minerals, and Dakon is desperate for females.

I am Torg. I have waited 34 rotations for a mate of my own. With this shipment, I was sure to get a fine, sturdy mate who'll bear me many daughters. Instead, I receive a small, curvy, pale-haired female who looks at me with anger and fear.

It is only when we 'kiss' that I believe things may work out between us. But I'm hearing rumors that Starr and her shipmates are law-breakers. To survive, Dakonians must obey all laws … or be exiled into the frozen wasteland.  Just when I have found her, will I have to send my mate to die?

Meet the characters of Alien Mate. Download a free three chapter sampler: http://dl.bookfunnel.com/k5dew3u7eu
About the author
USA Today bestselling author Cara Bristol writes steamy science fiction romance with an emphasis on the characters and their romance, with a little danger and adventure added for fun. She likes to say that she writes science fiction for readers who don’t like sci-fi.  Cara lives in Missouri with her alpha hero, her husband.