Idea - What To Do With Them

A question authors are often asked is “where do you get your ideas?” Most of us say things like: a magazine/newspaper article, a TV report, an overheard conversation. The truth is most of us don’t know where ideas come from.

Ideas for stories pop in our heads. They could pop into anyone’s head. What if . . .  Writers do something with the idea. Unfortunately, for me, the new idea usually comes when I’m at a difficult spot in my current work-in-progress. It’s so tempting to stop that project because the new idea is exciting, fresh. My normal procedure is to open a new document, jot down the idea, save it then go back to the WIP. Hard. But perseverance is essential. A writer never gets to be a published author without a finished product.

Meantime, I let that new idea percolate. I’ll think about it during that twilight time between awake and asleep. Morning or night. Mornings when it’s not time to wake up, I’ll lie in bed and think about the idea. Nights when I can’t go to sleep, I’ll recall the idea and explore options. What’s happening? Where? Why? The last is the most important. But it’s a good start.

I know writers who keep a pad of paper and a pen on their nightstands to jot down those ideas that come during the night lest they forget. Usually, I’m too tired to do that.

A couple of weeks ago, I mentioned the Mama Mallard nesting under my living room window. I finally got a picture of all the eggs. 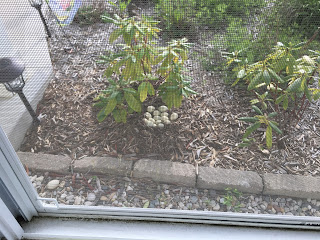 The idea to include that bit of trivia into this post was deliberate, not just an update. Mama sits on that nest all day and all night. She does leave the nest twice a day to get food and water. But her main occupation is keeping those eggs warm until they hatch. That’s much like my notion of letting a story percolate. I imagine this is a quiet time for Mama Mallard. When those ducklings hatch, she’s going to be very busy. Much like a writer when the idea is ready to be a story.

Brainstorming is a good next step. Brainstorming with someone else is more fun, but sometimes you have to brainstorm with yourself. Linear writers, like me, make lists. Some writers use paper and pen for a diagram where they write the idea in the middle of the page then arrows to all kinds of possible consequences, like what could possibly go wrong? Something has to go wrong, otherwise the story would be boring.

An exercise agent/author Donald Maas uses in his workshop is having the audience start off with that question. What could go wrong? He waits while we write. Then he’ll ask what’s worse than that? Again, he waits while we wrack our brains. Then he tells us to make it even worse. Talk about stretching the imagination. It’s similar to the advice telling us to chase our characters up a tree then throw rocks at them.

This type of exercise works especially well for a writer who plots first. That’s never been my method. I do plot a little but not at first. I plunge into the story, writing until I hit a wall. The what-happens-next wall. Then I employ all the above techniques. There’s no right or wrong method. It’s what works for the writer.

Currently, I have two works-in-progress. Actually, I probably have five or six projects. Some are still in the what-if stage, like eggs in a nest. Others are further along. But two WIPs are my focus right now. As you can see from my progress icon (on the right side of the blog), I’m not very far along with The Spy, a sci-fi romance. It makes sense to finish the novella, Jailbirds and Wedding Bells (temp title), because percentage-wise I’m further along.

But The Spy keeps calling me.