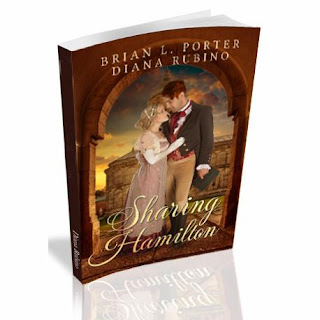 On New Year’s Day 2008, I sat on the couch trying to figure out who to write about next, and decided on Hamilton (this was WAY pre-Hamilton, the musical). The story centers on Hamilton, his wife and mistress—the love triangle that became the nation's first sex scandal, The Reynolds Affair, in 1791.

My agent said the story needed a bit more ‘oomph’ and I thought: how about a Jack the Ripper-type serial killer stalking the dark streets? That genre isn’t my forte, so I asked my friend, best selling thriller writer Brian Porter, to help out. I’ve known Brian for many years; he was my editor on A NECESSARY END, my Civil War romance centering on John Wilkes Booth’s insane plot to assassinate President Lincoln, and I knew about his success with his Jack the Ripper novels and Mersey Mystery series. So he was my very first choice as a collaborator. He graciously obliged and wrote a chilling subplot about a serial killer on the dark Philadelphia streets, Severus Black. Severus seems to have gathered a following already!

SHARING HAMILTON is based on the historical record. I read many Hamilton biographies and his brilliant essays titled “The Federalist Papers” to better understand his philosophy on the new government and the direction he wanted to bring the nation.

As the United States struggled in 1791, James and Maria Reynolds also struggled, flat broke. James, well aware of the strong attraction between his wife and Treasury Secretary Alexander Hamilton, hatched a plan to blackmail and get rich. James sent Maria to seduce Hamilton and extort hush money from him. The Reynolds Affair lasted almost two years. James got plenty of hush money. But he never counted on the two of them falling in love.

SHARING HAMILTON is a novel, but some facts can’t be ignored.

In 1791, Alexander Hamilton, married with five children, began an affair with the beautiful 23-year-old Maria Reynolds of . “The Reynolds Affair,” the country’s first sex scandal, lasted two years. They indulged their passion either in Maria’s boarding house or in Hamilton’s home when his wife and children were away. Not only did the forbidden trysts titillate the tabloid readers of the time, but news later broke that was paying Maria’s husband James hush money. James, a con artist, lived by his wits and scams. When he began extorting hundreds of dollars from under threat of ruining his reputation as Treasury Secretary, had no choice but to continue paying James while carrying on with Maria. Hamilton and Maria eventually fell in love, but being married to others, knew they had no future together.

The affair ended two years later when Hamilton, after a Congressional investigation, published The Reynolds Pamphlet, admitting that his dishonesty was “an amorous entanglement”, not embezzlement from the United States treasury. His wife Eliza, pregnant with their sixth child, forgave him, and his sterling reputation emerged untarnished. But it forever ruined his chances of the presidency.

Meanwhile, behind the romantic and political machinations, a vicious serial killer stalked the city by night. Having arrived in the New World from London, Dr. Severus Black, specialist in ‘women’s medicine’ and friend of the Hamiltons, had a penchant for the darker side of life. He managed to combine tending to Mrs. Hamilton during her pregnancies with a series of vicious murders of young women. One hundred years later these scenes were echoed on the streets of London by another killer who was never caught—Jack the Ripper. Mrs. Hamilton grew very fond of the handsome debonair young doctor, who in turn, returned an affinity for his patient. Blissfully unaware of his nocturnal activities, she continued her friendship with Dr. Black, but she sensed a secret grief, a bitter repentance, under his outward displays of charm and cordiality.

After a few run-ins with the law, Dr. Black made good his escape from Philadelphia when the police investigation drew too close for comfort. He settled in South Africa under a new name, where he found more than one use for his medical skills.

Apart from Dr. Black’s scenes, the story is told from the alternating viewpoints of the aristocratic Eliza Schuyler Hamilton and the lower-born but wily Maria Reynolds. It will tell the reader, in these women’s own words and intimate detail, about being in love with the same man during a critical period for the young nation.

While researching this book, I became fascinated with Aaron Burr, who makes a cameo appearance in the story as Maria Reynolds's divorce lawyer. I found the Aaron Burr Association on the internet, and have been a member ever since.

My fascination with Aaron led to my next bio novel, about his last wife Eliza Jumel, which was released on November 24.

An excerpt from SHARING HAMILTON

“You love me, Alex? You truly love me? Are you sure?” My breath caught in my throat. My heart danced. His admission rendered me breathless. I melted into a puddle in his lap.
“Maria, I’ve been awaiting you all my life.” He stroked my cheek. “You’re everything I’ve wanted in a woman—allure, intelligence, talent, fun—I’ve never met a woman who was all those things wrapped in one beautiful package.”
I gazed into his eyes, knowing our souls had entwined before this, ages before.
“I wanted you so badly from the moment we first met, at Aaron’s soirée,” I divulged the risky admission. “Though I knew you were already taken, and your course already laid out for you, I craved your attention, not to simply revere you from afar. I wanted to know you personally, even if only to spend one visit together. Just to be close to you. But I knew it was a fantasy. I was distraught when you left New York to live here. Then, when James made us move here, I knew our paths were destined to meet. It could not have happened any other way.”
“Then your initial letter to me had subtext I missed?” His lips curved with mirth.
“Oh, no, not at all,” I murmured between kisses on his face, his ears, his lips. “We—I was destitute. James had—” About to blurt it out, I stopped myself. I couldn’t bring myself to admit I’d lied to him; I’d been a pawn in James’s plot. “All I wanted was to meet you, to be alone with you, for a few stolen moments. That was all I deserved. After all, you are—who you are! I’m—no one.”
“Ah, you’re far from no one. A pity James doesn’t realize that. But I do. I will come clean with you, Maria. I love my wife, but I am not in love with her. As I am with you.”
He ran a fingertip over my lips and I tingled all over. I wanted to climb to the roof and sing to the entire world, “The great Alexander Hamilton, my new love, is in love with me!” How could I ever keep this a secret? The best part of being in love was sharing it with others. Oh, how I wanted to tell someone! But who could I trust?
“I am all talked out. Come upstairs.” His voice caressed my ears. “Take this candle, for my hands will be busy.” 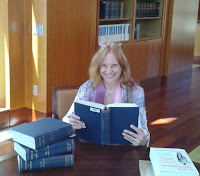 Diana Rubino writes about folks who shook things up. Her passion for history and travel has taken her to every locale of her stories, set in Medieval and Renaissance England, Egypt, the Mediterranean, colonial Virginia, New England, and New York. Her urban fantasy romance FAKIN’ IT won a Top Pick award from Romantic Times. She is a member of Romance Writers of America, the Richard III Society and the Aaron Burr Association. When not writing, she runs CostPro, Inc., an engineering business, with her husband Chris. In her spare time, Diana bicycles, golfs, plays her piano and devours books of any genre. She spends as much time as possible just livin' the dream on her beloved Cape Cod.