I'm sharing snippets from my new release NUMBERS NEVER LIE, a romantic suspense. This snippet comes after last week's when Maggie answered the call from the sheriff.


“I-I can’t believe he’s—”
Drew helped Maggie into a kitchen chair and forced her head between her knees. Talking to the deputy sheriff created such pain in his chest Drew feared it might be a heart attack—a tremendous heartache, instead. No wonder Maggie slid to the floor, ready to pass out, she who always appeared so confident, strong, capable, now she looked . . . vulnerable.
Maggie sat up, her expression haunted.
“Take deep breaths, c’mon, Maggie May.”
He deliberately used her full name, the way he did when they were kids, knowing she hated to be reminded that she’d been named after a song. His own breath hitched, he tightened his jaw and swallowed past the thickening in his throat—his best friend was dead, killed in a single-car accident near Muskegon in the early hours of Saturday morning--while he groused about the inconveniences of primitive camping, Jack lay dead. Thrown from his SUV that had rolled down a river embankment, undiscovered until late morning, after the fog burned off. 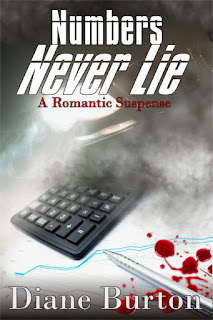 NUMBERS NEVER LIE is available at Amazon  It's free for KU subscribers.