I'm happy to welcome Nick Wilford as he stops by on his blog tour today. Nick's new release is a Young Adult story that sounds terrific. Here's Nick.

Hi Diane! Thanks for hosting me on my tour. I'd like to change pace a bit today and offer your readers a bit of a more thoughtful topic.

Dealing with Difficult Subjects in a Young Adult Book

I’ve been having a lot of fun on this blog tour up to now, but I’d like to get serious for a second and talk about the complications of dealing with sensitive subject matter in a young adult book – and why it can ultimately be worthwhile.

Corruption contains references to a rape, as well as other instances where the act is attempted. That wasn’t something I set out to confront when I started writing this series – I didn’t even  know what would happen in the second and third books at that point. I’ve never been much of a planner. It was something that developed as a byproduct of one of the ideas in the first book – when the series begins, sex has been eradicated in Harmonia, and babies are grown in a lab environment using DNA from both parents. That decision gets overturned as part of the drive to return to a more natural way of life, but this new edict is then abused. It’s part of the corruption referred to in the title of the second book, which centres principally around one of the scientists, Harold Lunkin.

So having included such an element, how can it be justified? Well, one of the main purposes of fiction is to reflect life as we know it, even if the book takes place in a totally different world or society. A writer shouldn’t pretend that certain things don’t exist. Of course, going about this in the right way can be a delicate matter, but that doesn’t mean we shy away from it. We know that everything we include should be there to serve the story and keep it moving forward, but you’re dealing with a bit more than a narrative device when it comes to something like this. Do proper research into the effect on victims, even talk to some people if possible.

Even if it wasn’t something you thought about at the start, you never know if something you write might end up helping someone who’s been through such an experience. Let them know that it’s alright to speak out and seek help and that no one can just get away with this.

Do you cover difficult subject matter in your writing? How do you go about it? 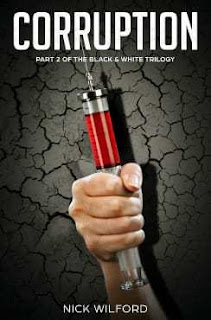 Title: Corruption
Author: Nick Wilford
Genre: YA dystopian Series: Black & White Series #: 2 of 3
Release date: 11th February 2019
Publisher: Superstar Peanut Publishing
Blurb:
Wellesbury Noon and Ezmerelda Dontible have found themselves in a position where they can make their native land somewhere that lives up to its name: Harmonia. However, they’re setting their sights further afield for their number one task: eradicating the disease that has plagued the neighbouring country of Loretania for generations and allowed the privileged Harmonians to live in a sterile environment.After dispatching a team of scientists to Loretania, armed with cratefuls of an antidote and vaccine and headed up by their friend, Dr George Tindleson, Welles, Ez, and Welles’s brother Mal – who grew up in that benighted nation – start to worry when they hear nothing back, despite what they had agreed. Commandeering a fishing boat to follow the science team over the sea, they soon find that, while the disease may be on the way out, a new kind of infection has set in – the corruption they thought they had stamped out in Harmonia.Can they get to the root of the problem and eliminate it before even more damage is done to an innocent people?*** Warning – this book contains themes that some sensitive readers may find upsetting. ***

Nick Wilford is a writer and stay-at-home dad. Once a journalist, he now makes use of those early morning times when the house is quiet to explore the realms of fiction, with a little freelance editing and formatting thrown in. When not working he can usually be found spending time with his family or cleaning something. He has four short stories published in Writer’s Muse magazine. Nick is also the editor of Overcoming Adversity: An Anthology for Andrew. Visit him at his blog or connect with him on Twitter, Goodreads, Facebook, or Amazon.